This is a guest post by South Wales (UK) based freelance photographer Simon King. He took his new EOS 7D Mark II to two rugby games and shares his impression. All images are copyrighted and used with permission.

I recently took delivery of Canon’s new 7D Mark II APS-C camera, I got to take the camera out with me to a Professional Rugby Match on Friday 31st October. As the 7D Mark II is designed as a sports and action camera this was an ideal opportunity to put it through it’s paces. This isn’t a technical pixel peeping review of the camera more first a impressions feel for how it performed.

As a freelance photographer I have to buy my own equipment, I currently shoot with two Canon 5D Mark III’s but for sport I really need something with a higher frame rate and deeper buffer. I was giving serious consideration to the 1DX but that is a significant investment so when the rumours of a 7D Mark II starting getting stronger I held off until I was certain that the camera was a reality. Canon announced the 7D Mark II on 15th September and I pre-ordered one as soon as they were listed […]. The specifications of the camera looked exactly what I needed; AF on a par or better than the 5D3; 10 frames per second with a huge buffer and the added benefit of a 1.6 crop factor. I owned the original 7D and in fairness it is a great camera but the image quality suffered a lot when the ISO was raised beyond around 1250, in my experience. So the one thing that concerned me about the 7D Mark II was if the image quality would be good enough for my purposes.

When sample images come out for a new camera they don’t tend to show the kind of images in the situations that matter to me and the same was true of the 7D Mark II. But when Scott Kelby showed some sample images he had taken at an American Football game I started to get very hopeful that the camera would more than meet my needs.

My 7D Mark II arrived on 30th October, in time for me to set it up how I wanted and to ensure that it worked nicely with my Sigma 120-300mm F2.8 Sport lens.This combination gives me an effective focal range of 192-480 mm which for a sport like rugby seems ideal. First impressions of the camera are that it feels very much like the 5D Mark III with the same button layout, some of the controls have a subtly different feel too them a kind of intangible tactile sensation. The only clear difference is the lever placed around the toggle switch which is used for changing the AF points quickly although it can be assigned to different uses. There is also the popup flash which, to be honest, I would be happy to live without, it is absent on the 5D3 and the 1DX and is something that I will, in all likelihood, never use.

My first chance to test out the camera was during a Guinness Pro12 game Ospreys vs Connacht at the Liberty Stadium in Swansea. Whilst a great general test for the camera it didn’t provide the opportunity to see how the 7D2 operated in poor light, as the stadium is well lit, with ISO 1600 being the highest I needed to get a shutter speed of 1/1000th at f2.8. However, it did give me the opportunity to see what the image quality was like and how good the AF was, frame rate and buffer.

The photograph below shows what I took to the game in a Think Tank Photo Airport International V2.0 roller bag: 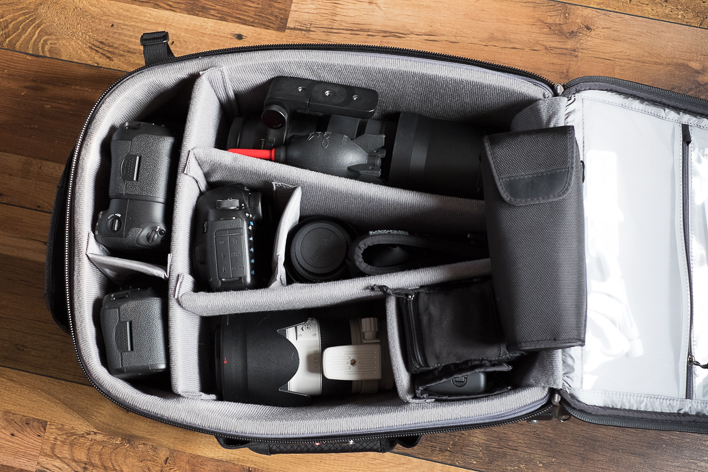 When shooting sports I have two cameras setup one with the 120-300 on a monopod and the other with a 70-200 on a strap around my neck. if the action gets too close for the 120-300 I switch cameras to make sure I don’t miss any action. So for this game I had the 7D2 with the 120-300 on the monopod and the 70-200 on a 5D3 around my neck. My plan was to use the 7D2 for the first half and if disappointed or I had any issues I would switch back to my second 5D3 for the remainder of the game. The great news is that the second 5D3 didn’t leave the bag, the 7D2 was my main camera for the entire game and performed incredibly well. The bottom line is that I couldn’t tell the difference between an image shot with the 7D2 and the 5D3. In use I found that the 7D2 performed like a 5D3 on speed with binoculars on, the AF is accurate and really fast to lock on, the handling and feel of the camera for any Canon users mean that the learning curve isn’t steep. That isn’t to say the 5D3 isn’t a fine camera but it is not really designed for action and sports. If I am doing a portrait session or wedding the 5D3 will be the camera of choice but now for sports I have a camera that covers the areas the 5D3 doesn’t. This camera is a keeper for me and will be staying in the bag for future sports work, it will be interesting to see how it performs in stadiums that have lower quality lighting than the liberty stadium but having seen images at high ISO’s I have every confidence that it will cope very well.

This is just my first outing with the camera and I missed some shots but that was down to user error plus having more reach than I am used to. I am sure as the season progresses I will get a lot more out of this camera. But for me after this one outing the auto focus, frame rate, buffer and image quality comfortably meet my needs.

My second chance to test the camera came on the following weekend, I didn’t have a commission so looked for a game to attend that would test the ISO capabilities more. I received accreditation for a game at Sandy Park featuring local rivals Exeter and Bath in the LV Cup.

Sandy Park is a fantastic stadium and the people there are amongst the friendliest I have encountered whilst covering rugby. Also the stadium is due to host some pool games in the 2015 Rugby World Cup, however the stadium is still being developed in preparation for that. Whilst the lights were pretty good there was considerable falloff in the corners and sides. The middle of the playing area seemed to settle at about ISO 2500, however other parts of the pitch registered up to ISO 6400. Also at half time I took a photograph of the Exeter Chiefs mascot dancing in front of the fans, this shot registered at ISO 8000!

Because of the variability of the light I setup the camera in manual to fix the shutter speed and aperture but used auto ISO. One of the great new features on the 7D Mark II is the ability to use exposure compensation when using Auto ISO in manual mode. For this game I set the exposure compensation at plus two thirds of a stop. This seemed to be about right for the circumstances with evaluative metering.

With the original 7D I was very wary of using an ISO above around 1250 and would lower the shutter speed to compensate. Therefore I was really keen to see how the camera performed in these conditions. As with the previous week I had my spare 5D Mark III in the bag, whilst I wanted to test the camera if at any point it became unusable I would switch bodies. As I had set Auto ISO i didn’t know what value would be used on an image until I checked the EXIF data in the photograph. Whilst there is clearly noise in the photographs the image quality is simply astounding, it’s not just that the images are cleaner but the fact that the noise has a more film like quality. With the original 7D the noise kicked in at relatively low ISOs but also had a pattern that made the image quality drop off considerably. Another factor with the original 7D occurred when an image was cropped, I found that you really didn’t want to crop the image too much otherwise the image quality suffered. Again this is an issue that I feel has been addressed by the 7D Mark II. With any camera if you over crop you will lose definition but with the first 7D it became a problem even with relatively low level cropping.

Personally I would have been delighted if the ISO settings were useable up to 6400, which would suit the majority grounds I normally attend at the extremes. The mascot shot at ISO 8000 is more than usable and gives me total confidence in using the 7D Mark II in pretty much any situation that I would encounter.

Hopefully my experience in relatively tough conditions will give you the confidence to have a look at this camera. I truly think this is a game changer for me.

I have included a few shots from the game please note all images watermarked CameraSport are subject to copyright and may not be used for any other purposes.

digitalcamerainfo published what is the most comprehensive first-impressions review of the Rebel T4i/650D I saw so far.…

Canon's new , featuring a large 1" sensor and a slew of manual controls and…