Fujifilm launched the instax Square 6, an inexpensive photographic gadget that captures the heart of many. Pre-order for the Fujifilm install Square 6 are open at $129, three color options: B&H Photo | Amazon.

Over at Fuji Rumors they got what appears to be an internal Fujifilm document, not expected to hit the public.

What is this document saying?

[…] within 2021, Fujifilm predicts a decrease in market share for Canon and Nikon of 50%

This seems to be the result from internal studies by Fujifilm Japan. The same Fujifilm document predicts a steady growth for Fujifilm.

I don’t know how realistic it is that Canon’s and Nikon’s market share will decrease by 50% in the next 3 years. That’s would hit Canon and Nikon hard, I guess.

Moreover, if Canon (and Nikon) will eventually announced their full frame mirrorless camera I expect they to get a stronger grip on the mirrorless market and not necessarily to loose market shares. I guess it’s Sony and Fujifilm to worry about what Canon, given their tech know how and engineering skills, may launch mirrorless-wise in the next 8-12 months. 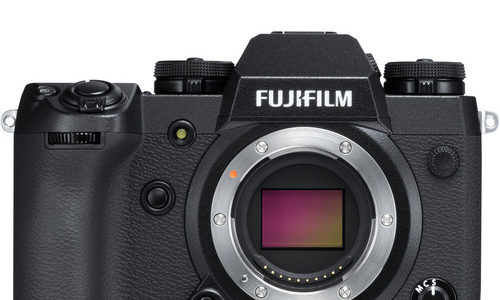 Fujifilm X-H1 at a glance:

Combining a robust, durable body with superior image quality and easy operation, the FUJIFILM X-H1 is the first camera in the series to include 5-axis 5.5 stops* in-body image stabilization (IBIS), and the new ETERNA Film Simulation feature, for outstanding video reproduction.

The X-H1, with a newly-designed robust and durable body, incorporates a range of extremely useful features that support shooting in various scenarios demanded by professional photographers and videographers. The X-H1 is the first X Series model to include the latest 5-axis in-body image stabilization (IBIS), which has a maximum of 5.5 stops*. The superior image quality with the memory color will be achieved in the various scenes in addition to easy operation. It is also mounted with the flicker reduction mode which enhances the quality of indoor sports photography. In addition, The X-H1 is the first camera in the X Series to include ETERNA mode, a new film simulation mode ideal for shooting movies.