Once again Canon has produced a very appealing compact camera for those looking for something which is pocket friendly but retains many of the high quality features which something bigger and more advanced has.

The fact that the Canon PowerShot G9 X uses the same sensor as the highly praised G7 X is good news. A one-inch sensor in something so small and neat is not easily achieved however, and as such there is a compromise in the focal length of the lens. However, the 3x optical zoom gives you a little bit of flexibility, and is enough for landscapes, portraits and macro subjects. Read the review. 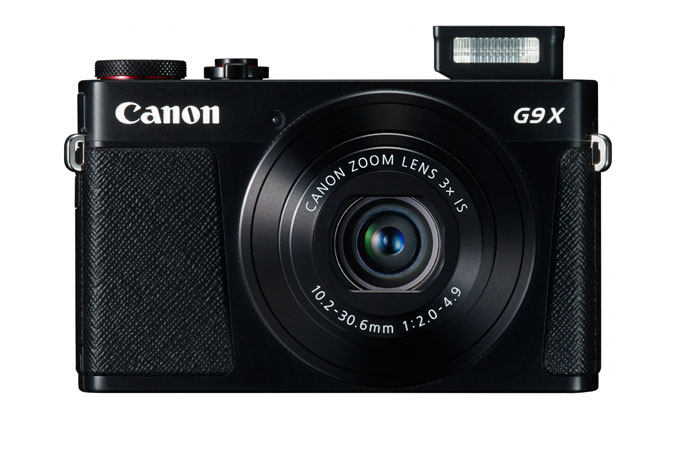 Canon Watch reader Al had the chance to quickly try out the new Canon Powershot G5 X and Powershot G9 X. He was also so kind to send me the download links for the user manuals.

Both new models feature a one-inch, 20.2 Megapixel*** High-Sensitivity CMOS sensor that delivers optimal performance with an ISO range of 125 – 12,800. The sensor, along with a proprietary DIGIC 6 Image processor, creates Canon’s HS System to provide photographers with vivid and detailed still images and video, even in difficult low-light shooting scenarios.

In addition, these new cameras feature an enhanced Star Mode to provide more precise focusing sure to delight stargazers and amateur astronomers. The “Star Trails” mode is now enhanced to improve the breaks in light between star trails turning star movement into a luminous still image, while the “Star Time-Lapse Movie” mode makes beautiful video clips that show the movement of the stars against a static background of dark space.

“We continue to strive to provide photographers with a range of imaging equipment options to support each individual shooting style while still providing the features, usability, and performance they expect from a Canon camera,” said Yuichi Ishizuka, president and COO of Canon U.S.A., Inc. “Our PowerShot G-series cameras offer a range of options designed to satisfy professionals looking for a convenient back-up camera to their DSLR as well as photography enthusiasts looking for maximum image quality in conveniently compact cameras they can take with them anywhere.”

Incorporating a bright, built-in high-resolution EVF that allows photographers to more easily compose and take pictures as well as track moving subjects, the high-performance PowerShot G5 X camera also features a bright f/1.8 – f/2.8 4.2x Canon Optical Zoom Lens (focal length range equivalent to 24-100mm). With the combination of a nine-blade iris diaphragm for beautiful background blur effects and an Intelligent Image Stabilization (IS) system that provides virtually shake-free images in a wide variety of shooting conditions, this camera’s optical system enables users to capture the shot as they envisioned it and is ideal for shooting in low-light conditions or when a shallow depth-of-field is preferred for more dramatic, soft backgrounds and beautiful portraits.

Housed in a classic black body, the enhanced controls include top-mounted mode and exposure compensation dials, front and rear control dials, and a control ring around the lens, which can all be customized to best suit different shooting styles. The PowerShot G5 X camera also features a built-in flash plus a dedicated hot shoe providing full compatibility with Canon’s powerful range of EX-series Speedlites and related accessories. There is also a 3.5mm mini-jack for compatibility with Canon’s Remote Switch RS-60E3.

Slim and lightweight, the PowerShot G9 X is the camera photographers will want to show off to their friends as much as they shoot with it. The camera features a bright f/2.0 – f/4.9, 3x Canon Optical Zoom Lens (focal length range equivalent to 28-84mm) along with Canon’s Intelligent Image Stabilization (IS) system for virtually shake-free images in a wide variety of shooting conditions.

The camera’s intuitive three-inch LCD touch panel with a new user interface allows for quick and easy changes to camera settings even while taking pictures. In addition to the touch panel, a lens-mounted control ring can be utilized to adjust several functions, including customizable manual focus. For shooting fast-moving subjects from kids at birthday parties to athletic events, the PowerShot G9 X camera has continuous shooting speeds up to six frames per second (fps) so none of the action is missed. It is available in classic black, or in a retro-style, silver-gray body with brown stitched leather accents.

Both new PowerShot models incorporate a broad range of exposure modes from fully automatic to full manual, and both offer users the choice of RAW as well as JPEG recording modes for still photos. Additionally, both new models incorporate a built-in ND filter for enhanced exposure control in bright shooting conditions.

The PowerShot G5 X and PowerShot G9 X camera kits are scheduled to begin shipping in November 2015 at suggested retail prices of $799.99 and $529.99, respectively.

Impressive image quality. Stunning videos. A camera that’s slim and comfortable. The PowerShot G9 X camera is all this and more, featuring a 20.2 Megapixel*, 1.0-inch High-Sensitivity CMOS sensor, Canon’s powerful DIGIC 6 Image Processor and a fast, f/2.0–4.9 lens that helps you capture inspiring images – even in low light – with detail and color to match. Whether you carry it in your hand, a bag or inside a pocket, the PowerShot G9 X can accompany you anywhere you go and is slim enough to quickly be in your grasp when opportunity knocks. Subjects in the distance become closer with a 3x Optical Zoom lens (28–84mm equivalent). Movement can be captured in stunning Full HD video, or frozen in beautiful increments with up to 6.0 fps continuous shooting. Should you find yourself gazing at the stars, switch into Star Mode and admire the view. With a convenient control ring for quick adjustments on the fly, built-in Wi-Fi®** and NFC*** for simple sharing and its appealing portability, the PowerShot G9 X is ready when you are, where you are.

High Detail, Even in Low Light

1.0-inch, 20.2 Megapixel* High-Sensitivity CMOS Sensor
At 1.0 inch, the image sensor on the PowerShot G9 X camera is larger than the ones on most other compact cameras. This allows it to capture a greater range of light, so bright areas of the image, like clouds on a sunny day, can be more detailed and less likely to be washed or blown out. With low-light scenes, like when you’re indoors or outside at night, an ISO range of 125–12800 lets you use fast shutter speeds to help keep photos sharp and virtually unaffected by camera shake. The 20.2 Megapixel* resolution is outstandingly high, giving you the option of printing out bigger photos or cropping in to highlight the best part.

Clear Photos in Almost Every Light

3x, f/2.0–4.9 Optical Zoom Lens (28–84mm)
The PowerShot G9 X camera has an impressive zoom lens with a remarkable optical zoom range, helping you capture wide shots like a big party scene or a gorgeous canyon, or enabling you to zoom in and get a wonderful close-up. The fast aperture goes as low as f/2.0, meaning it’s possible to see the subject and take clear photos in low light, often without a flash. Combined with Intelligent IS image stabilization, it helps to ensure virtually shake-free images, even in dark rooms or outside at night.

At only 7.37 ounces (209g), the PowerShot G9 X is a compact camera that’s not much bigger than a deck of cards, and can easily fit into a pocket or purse. Despite its size, it packs a large, high-quality image sensor and fast f/2.0 lens. These work together with features such as the DIGIC 6 processor to help create high quality photos, even in low light. This means you can have a camera within easy reach that’s able to deliver detailed images that show the texture of clothing fabric, the colors of a sunset or the moment a player kicks a ball at the goal.

The 3.0-inch touch panel is designed to take advantage of both hands while holding the camera so you can make adjustments while still being ready to snap a photo. The menus are customizable, meaning the settings you adjust frequently are easily accessible. You’re also able to swipe quickly through photos you’ve taken, and tap the screen to easily adjust picture options and change what the camera is focusing on. In addition, the control ring around the lens can be rotated with your fingers to make adjustments to various settings, simplifying the process even further.

Control Ring and Touch Panel
Quick, simple adjustments are ideal when you’re trying to capture the great moments in life. The PowerShot G9 X camera uses a combination of a responsive, 3.0-inch touchscreen and a smoothly rotating control ring around the lens. Your right thumb can pick the setting you’d like to change, and then your left fingers can rotate the control ring to adjust it, all without lowering the camera or taking your finger off the shutter. For example, if you’re trying to capture a dog playing in the sun, you can quickly adjust the shutter speed with a tap of the menu and a twist of the control ring to get the amount of detail you desire, while keeping a bit of blur to show action.