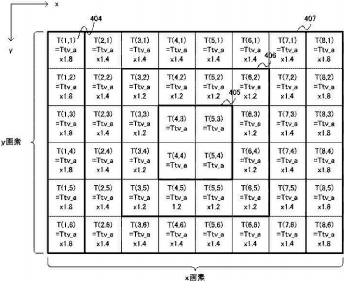 Egami (translated) spotted a patent filed by Canon for an image processing algorithm that corrects lens vignetting by varying the exposure time according to the image height, i.e. applying different exposure times to different spots in the image area.

One thing to note, in my opinion: this patent implicitly also refers to a new sensor tech. Some excerpts from the patent description:

The present invention relates to the control method of the imaging device which has an image sensor in which exposure control is possible for every region, and the Method of amendment of an image.

In the imaging device which photos an object by acquiring an optical image via a lens, in the image of the photoed object, what is called a light-falloff-at-edges phenomenon in which light volume is deteriorated occurs as it goes to an image periphery from the central part of the image.

It is known that a light-falloff-at-edges phenomenon will be decided by the relation of the characteristic of the lens with which an imaging device is provided, and the characteristic of a solid state image pickup device. Specifically, it is a relation with the position of the solid state image pickup device to an effective image circle (region where light hits uniformly), and the amount of light falloff at edges is decided uniquely. However, it will be the requisite that the effective pixel center of a solid state image pickup device and the optical axis center of a lens are corresponding in this case. It is dependent also on the f-stop of a lens, and the amount of light falloff at edges has an omission condition of light volume remarkable in the opening and small diaphragm side. In the opening side, although the incident light in a lens center enters as a general lens characteristic with circular light flux, since the incident light in the corner of a lens always passes along the corner, light will be kicked, incident light becomes the light flux of elliptic form, and light volume is deteriorated.

Is there something coming from Canon, something small? After a patent application to improve the…

Ever heard about liquid lenses? It may be the next big thing in optical engineering.…