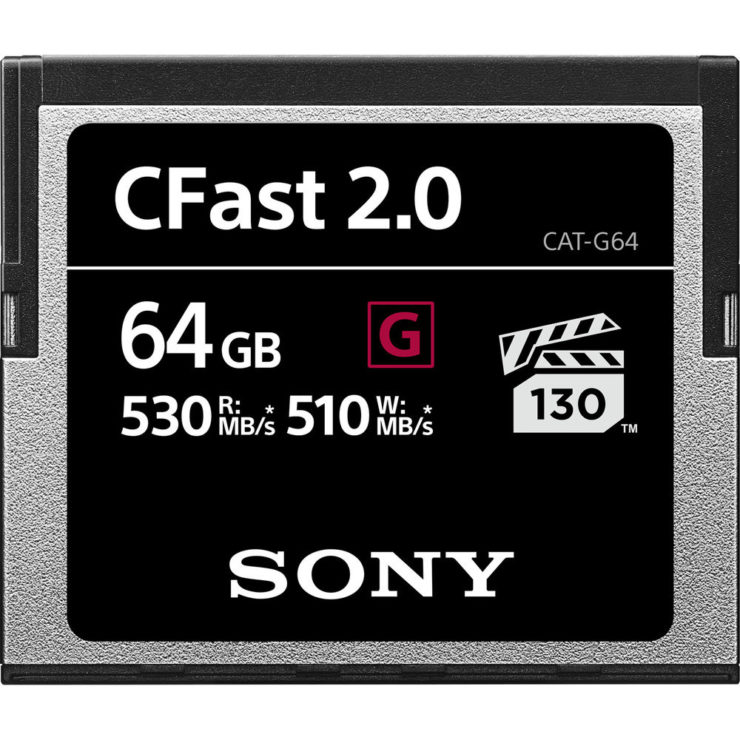 Get the Sony 64GB CFast 2.0 G Series Memory Card on sale at $79.99. Compare at $169.99. With the card comes also Sony’s File Rescue software. It realizes a higher rate of recovery for raw image or .mov files captured on Canon devices. It is available as a free download to memory card customers.

Designed for cameras that are compatible with the CFast 2.0 standard, such as the Canon EOS 1DX Mark II, EOS C200, EOS C300 Mark II, XC10, and XC15, the 64GB CFast 2.0 G Series Memory Card from Sony can be used to record a variety of content, such as 4K video, raw and high-resolution images, continuous burst shooting, and more. It features maximum read speeds of up to 530 MB/s, maximum write speeds of 510 MB/s, and thanks to Video Performance Guarantee-130 (VPG-130) support, minimum sustained write speeds of 130 MB/s are guaranteed.

Built for professional use, Sony CFast cards are tested for dependable storage and feature resistance against shock, static, and breakage, as well as the ability to perform in temperatures ranging from 23 to 158°F. In the event that content stored on this card is damaged or lost, Sony File Rescue software is available as a free download.

If your camera is compatible with CFast 2.0 media, this card can deliver strong performance for recording and sharing. Compatible cameras include the Canon EOS 1DX Mark II, EOS C200, EOS C300 Mark II, XC10, and XC15.

A read speed of up to 530 MB/s enables transfers of even large files, including 4K video or a bunch of high-resolution images in a matter of seconds.

The write speed of up to 510 MB/s makes it well-suited for continuous raw burst shooting with compatible cameras.

Sometimes, things go wrong and data such as photos and files get damaged or lost. Sony’s File Rescue is a powerful and user-friendly tool for recovering damaged or lost data. Applying an advanced algorithm, Sony’s File Rescue realizes a higher rate of recovery for raw image or .mov files captured on Canon devices. It is available as a free download to memory card customers

My favorite photo management software, Excire Foto, is available with a huge discount. Until May,…