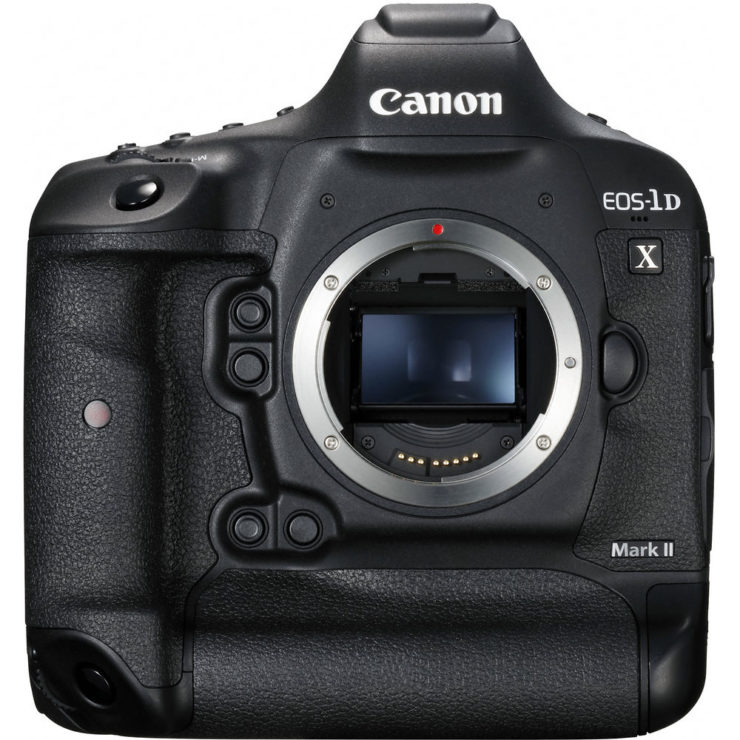 Bringing the shooting speed and video capabilities required by professional multimedia image-makers, the EOS-1D X Mark II is the flagship model within Canon’s DSLR lineup, and is characterized by its robust processing capabilities and ability to enable a high-end multimedia workflow. At the heart of the imaging system is a full-frame 20.2MP CMOS sensor and dual DIGIC 6+ image processors, which contribute to fast continuous shooting rates up to 16 fps in live view, 14 fps with full-time AF and AE, and an expanded sensitivity range from ISO 50-409600. The sensor and processor combination also avails DCI 4K video recording at 60 fps and Full HD 1080p recording at 120 fps, along with the ability to record on-board to a CFast 2.0 memory card, or uncompressed Full HD video can be saved via HDMI to an optional external recorder. Benefitting stills shooting is an apt 61-point High Density Reticular AF II system, which includes 41 cross-type points for a high degree of precision in varying light conditions, and video shooting is enhanced by Dual Pixel CMOS AF, which makes its first appearance in a full-frame sensor for smooth, quick, and controllable AF in live view. With a versatile set of imaging traits, the Canon EOS-1D X Mark II takes its place as a high-performance tool for professional photographers and videographers alike.

Complementing the robust set of imaging specs is an equally robust physical design based on a magnesium alloy body construction that is both dust- and weather-sealed for use in harsh environments. Integrated within the body is a large 3.2″ 1.62m-dot touchscreen LCD for bright, high-resolution live view monitoring and image review, and a large 0.76x Intelligent Viewfinder II is offered for clear eye-level shooting. For versatility in file handling, both CFast and CompactFlash memory card slots are available, and the 1D X Mark II also supports sharing imagery over Wi-Fi, as well as wireless remote camera control, via the optional WFT-E8A Wireless File Transmitter. Additionally, a built-in GPS module permits in-camera geotagging of photos and videos, and also allows for auto time syncing with the Universal Time Code for more efficient file sharing and organization.

A redeveloped full-frame 20.2MP CMOS sensor pairs with dual DIGIC 6+ image processors to avail notable image quality and accuracy, as well as fast performance throughout the camera system. The sensor itself integrates a gapless structure with micro lenses to provide enhanced low-light performance and reduced noise levels, and when coupled with the processors an expanded sensitivity range of ISO 50-409600 is available.

The sensor and processors also work together to avail quick shooting performance, with continuous rates up to 16 fps when working in live view. When working with the viewfinder, shooting up to 14 fps is possible along with the ability to record up to 170 raw files in a single burst if using a CFast 2.0 memory card. If shooting JPEG files, an unlimited number of frames can be recorded in a burst, even at full-resolution. If working with a CompactFlash card, the buffer is rated at up to 73 raw frames in a burst, or infinite JPEGs.

In addition to the stills attributes afforded by the sensor, it is also used for recording DCI 4K video at up to 60 fps, and it is the first full-frame sensor to incorporate Dual Pixel CMOS AF technology for precise, controllable, and fast live view focusing performance.

Benefitting accurate focusing and fast tracking performance, a 61-point High Density Reticular AF II system is employed, which incorporates 41 cross-type points for increased precision as well as a center point that is sensitive to -3 EV. All 61 phase-detection points support metering at effective apertures of f/8 or larger, which benefits the use of teleconverters and telephoto lenses. Additionally, a separate, dedicated DIGIC 6 processor is used for the AF and metering systems in order to maintain quick performance while recording 4K video or shooting at fast continuous speeds. As a whole, the AF system has gained approximately 8.6% in coverage in the center, and 24% in the periphery, for enhanced subject tracking across the image frame, and an AI Servo AF III+ algorithm is used to intelligently and precisely acquire focus in single-point, Large Zone AF, or any other focusing mode.

When working with live view during stills shooting or video recording, a Dual Pixel CMOS AF system is employed that provides incredibly quick and accurate focusing performance in a similar manner to how a camcorder acquires focus. This system integrates two separate photodiodes within each pixel to provide a broad and dense network of phase-detection gathering elements across a majority of the image sensor to reduce focus hunting for faster, more direct control of focus placement. When working with still imagery, this focusing system works to acquire focus quickly and accurately, making it ideally suited to shooting and tracking moving subjects so that critical focus is attained with each shot. When shooting video, a Movie Servo AF mode offers smooth and natural focusing when changing from different subjects or different distances within the scene, as well as the ability to specify tracking sensitivity, AF speed, and Face Tracking priority. Benefited by the Touch AF system, rack focus is possible simply by touching elements within the scene on the touchscreen in order to change focus in an intuitive manner. Subject tracking in movies is also heightened due to the Dual Pixel CMOS AF system’s ability to recognize subjects and maintain focus when working within changing or cluttered scenery.

Designed for both professional stills shooting and video recording, the 1D X Mark II supports DCI 4K (4096 x 2160) resolution recording at up to 60 fps at 800 Mbps, along with Full HD 1080p shooting at 120 fps at 360 Mbps for slow motion playback. When recording in-camera, 4K video has 4:2:2 sampling and 8-bit color depth, while Full HD 1080p footage has 4:2:0 sampling. Uncompressed Full HD 1080p video can also be saved via HDMI to an optional external recorder with 4:2:2 color sampling. 4K video is recorded using a central 4096 x 2160 area of the sensor, while Full HD recording makes use of the entire full frame, and a top sensitivity of ISO 12800 is available with 4K or ISO 25600 with Full HD.

Audio can be recorded using the on-board stereo microphone or an optional external mic can also be used via the 3.5mm mic jack. Real time audio monitoring is possible, too, via the 3.5mm headphone jack. The 4K video recording also avails the ability to take 8.8MP still frame grabs during playback and save them as single images.

Black Friday: Here Are Discounts On Canon Cameras and Lenses

It's Black Friday, and here are discounts on Canon cameras and lenses. B&H Photo has…

Have You Checked The Canon Store Refurbished Listings Today?

You should. At least if you are looking for the real deals. Here are the…