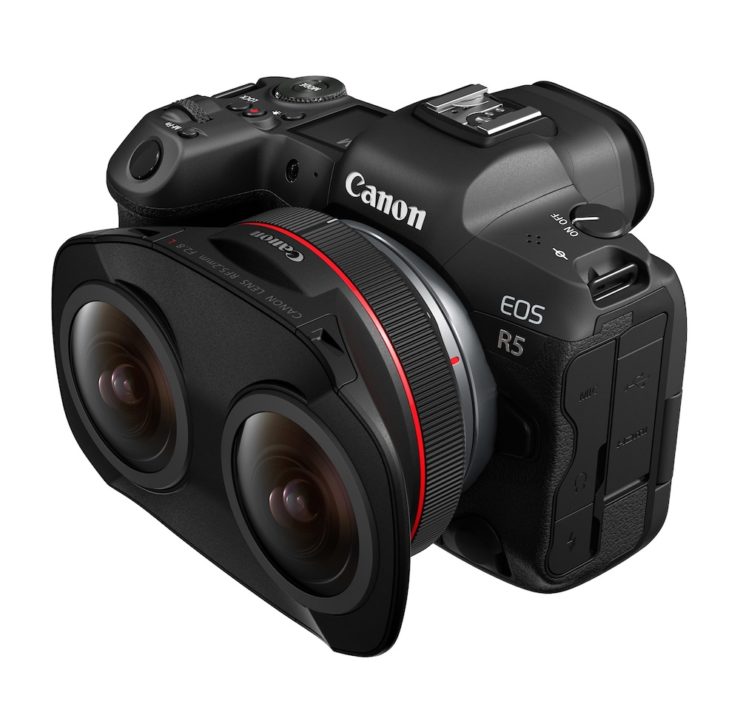 Canon has now shared a short, 4K video captured with the RF 5.2mm. The video gives a good idea about what you can achieve with this lens (look around and interact with the scene, for instance).

Unlock new dimensions in visual storytelling with the RF 5.2mm f/2.8L Dual Fisheye 3D VR from Canon. Currently compatible with the EOS R5 Mirrorless Digital Camera, this L-series lens is the world’s first digital interchangeable lens that can capture stereoscopic 3D 180° VR imagery to a single image sensor. The dual high-performance L-series fisheye lenses combine imagery onto a single image sensor delivering impressive results to a single file. This helps simplify your workflow by eliminating the need to sync and stitch multiple video files. Creators can go from traditional stills or video shooting to stereoscopic 3D capture with a simple lens swap, and the pairing of this lens with the EOS R5 provides for high resolution video recording at up to DCI 8K 30fps and DCI 4K 60 fps.

With firmware 1.5.0 or higher and one of Canon’s VR software solutions, you can create immersive 3D that can be experienced when viewed on compatible head mount displays including the Oculus Quest 2 and more. Viewers will be able to take in the scene with a vivid, wide field of view by simply moving their heads. Creatives, industry professionals, and newcomers to VR can create an immersive experience, capturing dynamic scenes for entertainment, tourism, training and education, real estate, storytelling, or anywhere you want to bring your audience to.

Designed for use with the Canon EOS R5 Mirrorless Digital Camera, this lens gives you the ability to create an immersive 3D experience. When captured imagery is viewed on compatible head mount displays such as the Oculus Quest 2 and more, a viewer can feel like they are a part of the story that you create. With stereoscopic 3D 180° VR, your audience can see life-like depth and can move their head to look around the viewing environment. The lens features a beautifully engineered and optimized folded optical design, with separate left and right optical systems. This enables you to capture stereoscopic 3D imagery with a 180° field of view to a single full-frame image sensor.

Pairing this one lens to an EOS R5 camera provides you with the ability to deliver a single file. This lets you create a powerful and convenient solution compared to traditional VR systems that capture a 3D scene with two separate fisheye lenses, recorded to two separate cameras, which write two separate files. This saves you time and effort behind the camera and in post-production by helping to solve issues such as multi-camera positioning, multi-lens syncing, image stitching, audio syncing, encoding, and more.

To help improve the user experience when shooting with the RF 5.2mm f/2.8L Dual Fisheye 3D VR lens, special features have been added to the firmware to optimize VR shooting. This firmware provides metadata information for the software to convert the image from fisheye to equirectangular. One of the features enabled with the use of this lens is a Magic Window on-screen overlay, accessed by tapping the INFO button that assists in framing the central resting position, which shows an approximate field of view in the composition. The user can magnify at 6x and 15x magnification and also use MF Peaking while magnified. Additionally, you can swap between the left and right lenses with a simple tap of the INFO button while magnified, which is incredibly useful when manually focusing the lens.

Canon’s EOS VR System is comprised of this lens plus an EOS R5 camera with updated firmware and subscription-based software, either Canon’s EOS VR Utility or EOS VR plug-in for Adobe Premiere Pro, both of which are currently in development. Availability and details to follow on or about early 2022. This powerful and convenient combination provides much desired flexibility and efficiency, helping save you precious time accessing your content so you can prepare it and share it more quickly. With either solution, conversion of fisheye to equirectangular imagery is possible, as well as processing and exporting at various resolutions and formats to help you capture, convert, and process high-quality VR images and movies.

Featuring dual 5.2mm fisheye lenses positioned with 60mm of spacing between left and right lens centers, this lens provides an interpupillary distance closely resembling human vision. This provides for a powerful and immersive experience that brings the viewer to feel as if they are within the scene where the video or stills image takes place. Also, this lets the viewer change their viewing angle within a recorded scene so they can look around with the use of a compatible head mount display.

Each of the left and right fisheye lenses have their own optical system, including separate but coordinated aperture mechanisms. Together they seamlessly and simultaneously control the exposure of both lenses, so setting your aperture is the same process as with any other RF lenses.

Engineered with 12 elements in 10 groups and highlighted by two ultra-low dispersion glass elements and prisms in both the left and right lenses, this lens delivers impressive color and clarity with minimal chromatic aberration.

SWC technology decreases ghosting and reflections that may occur when shooting in more challenging lighting conditions such as during strong backlight, providing versatility and more uniform color balance in the scene.

Coordinated manual focusing of both lenses allows you to focus each lens using the manual focus ring. Additionally, a left-right focus adjustment dial lets you refine focus of the right lens separately from the left lens by using the included hexagon wrench.

Providing a highly adaptable aperture range, the RF 5.2mm f/2.8L Dual Fisheye 3D VR lens allows you to go from a bright f/2.8 aperture in low light shooting, to a deep depth of field of f/16 for more control of your exposure in brighter environments. Additionally, a gelatin filter holder is located at the rear of the lens allowing optional gel filters to be used similarly to previous ultrawide-angle Canon lens offerings.

Thanks to the RF mount and the folded optical design, the size and weight of this lens makes it easy to use in tight spaces and easy to carry in a camera bag. The lens weighs under 1 lb and is just slightly over 2″ in depth from the rear mount to the front side of the lens, creating a compact, portable, and lightweight solution.

Built to L-series lens specifications, the lens features a highly durable RF mount design. With dust- and water-resistant sealing, you can confidently shoot in challenging weather conditions. Fluorine coating is used on the front element to help prevent water, oil, and other surface residue like fingerprints from sticking to the lens, and this also facilitates quick and easy wiping without the use of solvents.