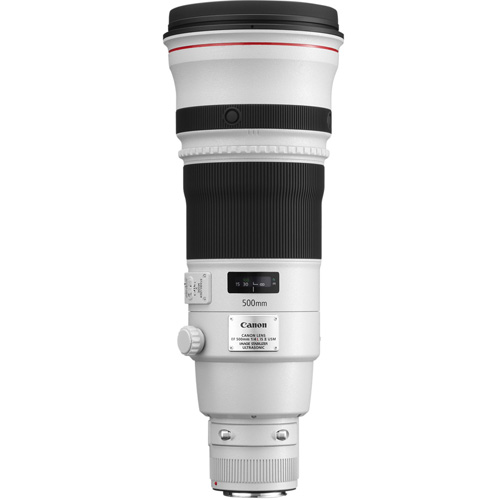 Let me first state that I really like Scott Bourne’s posts. They are always concise and synthetic, yet informative and pleasant to read. The same applies to his mini-review of the EF 500mm f/4L IS Telephoto Lens. Announced more than a year ago, and delayed because of the Japan earthquake, the lens started to appear in limited quantity at some sellers. Scott Bourne is raving about this lens:

What a lens! There is a new IS mode that offers four stops of speed and three modes. New redesigned optics perform with almost no chromatic aberration. But the BIG difference is the lens is significantly lighter. The lens weighs a pound and a half less than its predecessor and it feels like a feather by comparison.

Canon says the lens has redesigned fluorite optics and less chromatic aberration, and it is made out of magnesium and titanium. There are 3 IS modes, you should get 4 stops using image stabilization. This isn’t really a budget lens, having a price tag of $10,499. Pre-orders can be filed at the following shops:

Because image stabilization technology in super telephoto lenses may inadvertently over-compensate and interfere with composing and framing distant or moving subjects, the EF 500mm f/4L IS II USM includes an advanced third Image Stabilization mode (Mode 3) that activates IS only when the shutter button is fully pressed. This allows users to pan fast-moving subjects and then activate IS only when it is precisely required.

Additionally, all three IS modes give the equivalent effect of a shutter speed four stops faster, ideally positioning the Canon EF 500mm f/4L IS II USM for professional action photography, from sports to nature. The addition of the Power Focus mode enables smooth focus change when shooting video. Buttons and switches are redesigned for intuitive, deliberate operation, and dust and water sealing keeps the EF 500mm f/4L IS II USM functioning flawlessly in even the most challenging environments.

Update: Adorama also has both lenses ready for pre-order.