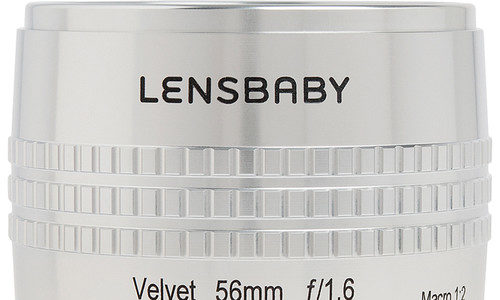 PORTLAND, OR and ST. LOUIS, MO–(Marketwired – Apr 7, 2015) –(ShutterFest 2015) — Lensbaby, providing creative effects lenses to photographers that ignite their creativity and expand their unique visions of the world, today announced the Velvet 56, a new high-end classic portrait lens. Velvet 56 will be on display for the first time during ShutterFest 2015, being held April 7-8 at St. Louis Union Station, St. Louis, Missouri.

Velvet 56 is a 56mm f/1.6 SLR and mirrorless camera lens with 1:2 macro capabilities. This “new classic” portrait lens delivers a velvety, glowing, ethereal look at brighter apertures, and beautifully sharp but subtly unique images as you stop down — with gorgeous, velvety tones that give digital images a film-like, organic quality. Incredibly versatile, Velvet 56 enables photographers to move seamlessly from shooting an environmental portrait, to capturing details in a subject’s clothing or jewelry. Nature and macro photographers will find its close-focus capabilities, combined with effects varying from impressionistic to just a touch of velvety smoothness, provide a set of visual tools that will expand their vision of the world.

Evoking the image style and construction quality of classic portrait lenses of the mid-20th century, Velvet 56 features the heft and smooth, dampened manual focus of these early lenses. Velvet 56, with an all metal body, will be available in two colors: traditional black, plus, Velvet SE, a special silver edition. Velvet SE will feature a beautiful clear-anodized finish, along with engraved aperture and focus markings.