Canon patent application 2022137975 (Japan) discusses methods and technology for an air cooling system that also works for IBIS. How is that achieved? The patent literature describes a cooling method that is very similar to what is done for computer CPUs. Heat dissipation elements are mounted on the back of the imaging sensor, the cooling air passes through these elements. Extract from the patent literature (machine translated):

An imaging apparatus capable of efficiently dissipating heat generated by an imaging element movable in a direction orthogonal to an optical axis is provided.

Conventionally, in order to improve image quality, there has been known an imaging apparatus that optically corrects image blur by moving an imaging device in a direction perpendicular to the optical axis . The image pickup device is required to have sufficient heat dissipation because the heat generated in the image pickup device affects the image quality when driving image blur correction, continuous shooting, moving image shooting, and the like.

In recent years, the amount of heat generated by an imaging device has increased due to improvements in moving image performance of imaging devices. For this reason, with the configuration disclosed in Patent Document 1, it is difficult to sufficiently dissipate the heat generated by the image pickup device, and there is a possibility that the temperature rise of the image pickup device cannot be eliminated. On the other hand, if the thickness and width of the heat dissipation sheet are increased in order to increase the amount of heat dissipation, the movement load of the imaging element increases .

SUMMARY OF THE INVENTION

Accordingly, it is an object of the present invention to provide an imaging apparatus capable of efficiently dissipating heat generated by an imaging element movable in a direction perpendicular to the optical axis.

Means for Solving the Problems

Remember the overheating soap opera that came along with the Canon EOS R5? Here is a new Canon patent for a fan aided cooling system for what we think is a mirrorless camera.

This Canon patent application might point to the next generation of Canon’s Defocus Smoothing technology.

An electrochromic (hereinafter sometimes referred to as “EC”) element is an element having a pair of electrodes and an EC layer disposed between the electrodes. It is an optical element that adjusts the hue and amount of light in the visible light band by applying a voltage between them to oxidize or reduce the compounds in the EC layer.

EC elements have already been applied to products such as variable transmittance windows for aircraft and anti-glare mirrors for automobiles. Attempts have been made to apply it to The apodization filter is an optical element that smoothes the outline of a blurred image, and has a transmittance distribution in which the transmittance decreases with increasing distance from the optical axis.

To me it appears this might be the next generation of the Defocus Smoothing technology.

I am not 100% sure I got this Canon patent application right. It seems to be about a magnifying optical system that increases the focal length.

In view of such problems, an object of the present invention is to provide a converter lens capable of obtaining high optical characteristics in the entire system when arranged on the image side of the master lens.

A potentially rather useful Canon patent was spotted: an extension grip that allows for uncomplicated change of the batteries.

Canon patent 2022125113 (Japan) discusses methods and technology for an extension grip where batteries can be changed easily. According to the patent drawings, it seems for a compact mirrorless camera, more or less in EOS RP style.

A camera accessory is provided in which a battery can be easily inserted into and removed from the camera while being attached to the bottom surface of the camera.

The present invention provides a camera accessory that allows the battery to be easily inserted and removed from the camera while attached to the bottom surface of the camera. 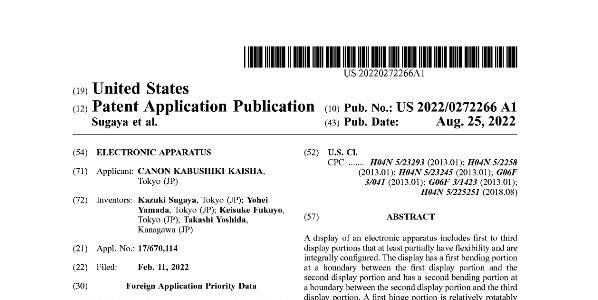 Well, that’s an interesting Canon patent: a foldable screen on the back of your future mirrorless camera.

Canon patent application 20220269152 and 20220272266 (both USA) discuss technology and methods to bring a foldable screen on the back of a mirrorless camera. The abstracts:

Pretty cool, I think. we have foldable screens on smartphones, and we will have them on other devices too, cameras included. The camera in the patent drawings looks like a very compact mirrorless camera.