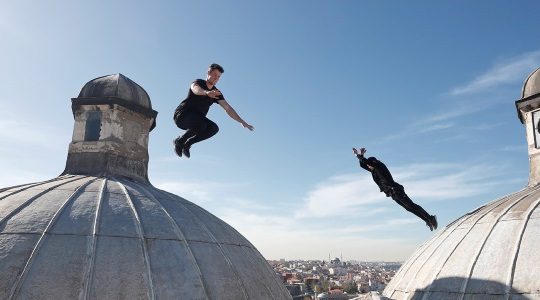 The clip below was shot in Istanbul, Turkey (here another edit, lasting longer). On location with the parkour collective Storror was Samo Vidic, an acclaimed sports photographer and Canon ambassador. Samo used a selection of Canon equipment to photograph and capture Storror’s performance, which included the Canon EOS M50, EOS 5D Mark IV, EOS 1DX Mark II and EOS C200.

For more information on Canon Europe’s Summer campaign and to watch behind the scenes action, please visit Canon’s dedicated site.

London, UK, Monday 25th June 2018 – Canon Europe has launched its latest campaign, in collaboration with elite Parkour athletes Storror. Filmed in the historic city of Istanbul in Turkey, the campaign encourages people to try a new experiences for the first time and capture it on a Canon camera.

Canon Europe challenged Storror to attempt a bold, exciting and audacious stunt, in this case the athletes turned the cameras on themselves and filmed their adventure free-running across a series of iconic sites in Istanbul, such as the Bosphorus Strait which separates Europe with Asia. The challenge was a remarkable feat of human endurance, skill and agility which will inspire others to try something for the first time.