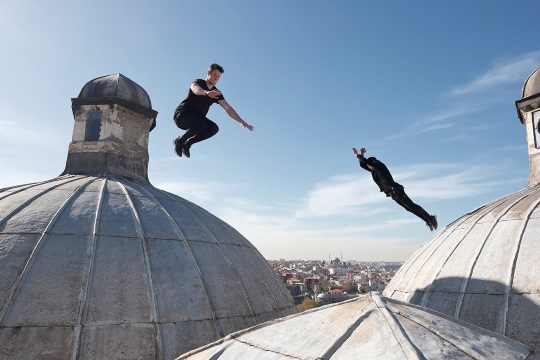 The clip below was shot in Istanbul, Turkey (here another edit, lasting longer). On location with the parkour collective Storror was Samo Vidic, an acclaimed sports photographer and Canon ambassador. Samo used a selection of Canon equipment to photograph and capture Storror’s performance, which included the Canon EOS M50, EOS 5D Mark IV, EOS 1DX Mark II and EOS C200.

For more information on Canon Europe’s Summer campaign and to watch behind the scenes action, please visit Canon’s dedicated site.

London, UK, Monday 25th June 2018 – Canon Europe has launched its latest campaign, in collaboration with elite Parkour athletes Storror. Filmed in the historic city of Istanbul in Turkey, the campaign encourages people to try a new experiences for the first time and capture it on a Canon camera.

Canon Europe challenged Storror to attempt a bold, exciting and audacious stunt, in this case the athletes turned the cameras on themselves and filmed their adventure free-running across a series of iconic sites in Istanbul, such as the Bosphorus Strait which separates Europe with Asia. The challenge was a remarkable feat of human endurance, skill and agility which will inspire others to try something for the first time.

The challenge saw the seven-strong UK based group jump, vault and climb over a combination of obstacles, including the Galata Bridge, the domed cupola rooftops near Süleymaniye, culminating with a leap onto the roof of a passenger ferry, carrying them to the cargo seaport of Haydarpaşa on the Asian side of the Strait, to successfully complete the challenge.

Storror filmed their adventure exclusively using a variety of Canon cameras and lenses, which included the award-winning EOS M50 and an EOS C200 cinema camera. The EOS M50 mirrorless camera was selected due to its lightweight and compact body, fast autofocus and seamless connectivity to social media, making this the perfect choice.

The elite athletes have earned a loyal following on social media, with over 1 million subscribers to their YouTube channel alone. Over the years, the free-runners have travelled to over 78 countries and are unique in the way they shoot, direct and edit their own material. Storror’s Drew Taylor has previously helped choreograph action scenes in blockbuster movies such as Kingsman 2: The Golden Circle and Dr Strange starring Benedict Cumberbatch.

Lee Bonniface, Marketing Director, Canon Europe said: “We are delighted that we were able to support Storror become the first Parkour group to cross continents. We challenged them to attempt something bold and capture their experience to inspire others to do the same. Whilst we don’t expect everyone to be quite as daring, every day can produce a first and Canon will help you capture it.”

Drew Taylor from Storror, said: “When Canon Europe challenged us to do something for the first time, we came up with the idea of using Parkour to cross continents. Rather than making things easy for ourselves, we took things to the next level, creating something that had never before been attempted, by doing it over moving boats and vehicles and traversing through the busy streets of Istanbul.” He added: “Canon Europe also provided us with the awesome EOS M50 to use, which is lightweight and has great autofocus, perfect for fast moving parkour. We were able to connect the cameras to our smartphones for a quick and easy upload to our social channels.”