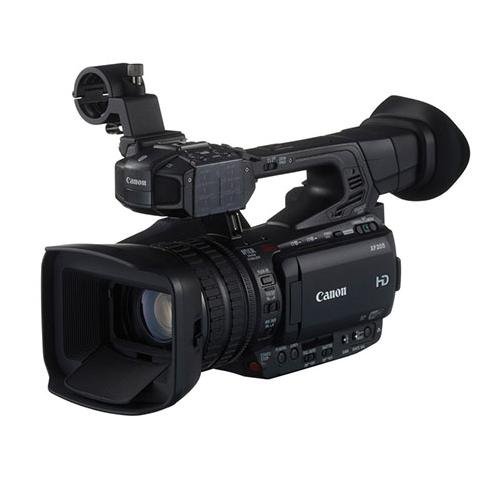 Canon announces two free firmware upgrades for the Canon XF205 and XF200 professional camcorders. These updates will add a new image quality setting and support for IP streaming, and will be released respectively mid-April and late-June 2015. Press release:

MELVILLE, N.Y., March 4, 2015 – Canon U.S.A., Inc., a leader in digital imaging solutions, announced today two free firmware upgrades1 that the company will make available for the Canon XF205 and XF200 Professional Full HD camcorders (released in July 2014), one of which adds a new image-quality setting to the camcorder and another that enables the streaming of video over an IP network.

Since their launch in July 2014, the Canon XF205 and XF200 camcorders have proven popular in a wide variety of fields, from the production of news and other broadcasting content to the recording of weddings and other events. In response to the needs of a wide range of users, the new firmware upgrades will add such features as a new image-quality setting that facilitates video recording with reduced noise even in low-light conditions2, as well as numerous functions that deliver enhanced basic performance, such as the ability to stream live video over an IP network.

One of the new upgrades, to be released in mid-April 2015, will add an image-quality setting to the XF205 and XF200 camcorders that facilitates the recording of video with noise reduction even in low-light conditions. This feature will enable users to choose the optimal image quality based on their shooting requirements, providing a choice between a setting that prioritizes the high-resolution capabilities of the camcorder – the camcorders’ default setting – and a new image-quality setting that gives priority to video with noise reduction.

The firmware upgrade to be released in late-June 2015 will enable the XF205 and XF200 camcorders to support video streaming over an IP network, a method that is widely used in the broadcasting industry to send and receive video signals. By sending video over the internet while it is being captured, users will be able to provide live transfers of footage to news programs and video-sharing sites. In addition, the upgrade will enable the camcorders to be used with Fujitsu’s video transmission equipment, the Fujitsu Network IP-900IID and IP-920D HD/SD Compact Video Decoders3 as well as software supporting IP streaming. Thanks to these new capabilities, users will be able to stream video over an IP network without having to alter existing video-capture and editing workflows, such as those employed at broadcasting stations.

Canon will exhibit prototype-versions of the firmware upgrades at the Canon booth during the 2015 NAB Show from April 13 to 16 in Las Vegas.

In addition to newly supporting IP video streaming, the firmware upgrade – available in late-June 2015 – will allow XF205 and XF200 camcorder users to take advantage of various new functions, including those outlined below:

Canon U.S.A., Inc., is a leading provider of consumer, business-to-business, and industrial digital imaging solutions to the United States and to Latin America and the Caribbean (excluding Mexico) markets. With approximately $31 billion in global revenue, its parent company, Canon Inc. (NYSE:CAJ), ranks third overall in U.S. patents granted in 2014† and is one of Fortune Magazine’s World’s Most Admired Companies in 2015. In 2014, Canon U.S.A. has received the PCMag.com Readers’ Choice Award for Service and Reliability in the digital camera and printer categories for the 11th consecutive year. Canon U.S.A. is committed to the highest level of customer satisfaction and loyalty, providing 100 percent U.S.-based consumer service and support for all of the products it distributes. Canon U.S.A. is dedicated to its Kyosei philosophy of social and environmental responsibility. In 2014, the Canon Americas Headquarters secured LEED® Gold certification, a recognition for the design, construction, operations and maintenance of high-performance green buildings. To keep apprised of the latest news from Canon U.S.A., sign up for the Company’s RSS news feed by visiting www.usa.canon.com/rss and follow us on Twitter @CanonUSA. For media inquiries, please contact [email protected].

Availability and specifications subject to change without notice.

1Details regarding the firmware upgrades, new image-quality settings and support for IP streaming, including where they can be downloaded, will be posted on the Canon U.S.A. website at in mid-April and late-June, respectively.