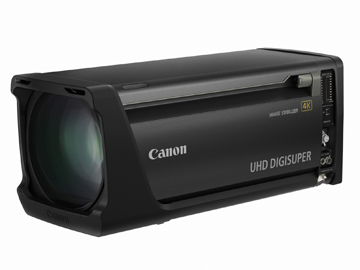 TOKYO, April 2, 2015—Canon Inc. announced today that the Company is currently developing a high-zoom-ratio, long-focal-length field zoom lens that realizes exceptional imaging performance for use with 4K-capable broadcast cameras employing 2/3-inch sensors. Canon will exhibit a prototype of the 4K field zoom lens at the 2015 NAB (National Association of Broadcasters) Show, to be held from April 13 to 16 in Las Vegas, Nevada, U.S.A.

As 4K-resolution content, which traces its beginnings to the movie-production industry, continues to gain ground in the broadcasting industry, initiatives are currently underway to implement 4K broadcasting in countries around the world with an increasing number of professionals making use of equipment supporting 4K production.

The new 4K field zoom lens is being developed as a new model in Canon’s DIGISUPER series of studio and field broadcasting lenses, which have garnered high acclaim from professionals in the industry. In addition to realizing a high level of imaging performance supporting the capture of 4K-resolution video, the new lens will feature specifications and a body size that ensure a high level of operability and ease of use that are on a par with Canon’s HD broadcast lens models, making it ideal for a wide range of applications, including sports and live concert telecasts.

Although details regarding product specifications and pricing are yet to be decided, Canon is aiming to commercialize the 4K field zoom lens in late 2015, positioning it as the first model in the Company’s new UHD-DIGISUPER series of lenses that brings together Canon’s latest optical technologies for use with 4K-capable and other next-generation broadcast cameras. In this way, Canon will continue responding to the needs of a wide range of users by further strengthening its broadcast lens lineup.

And eventually here it is, officially announced, the Canon EOS R3. Watch the live-streamed announcement…