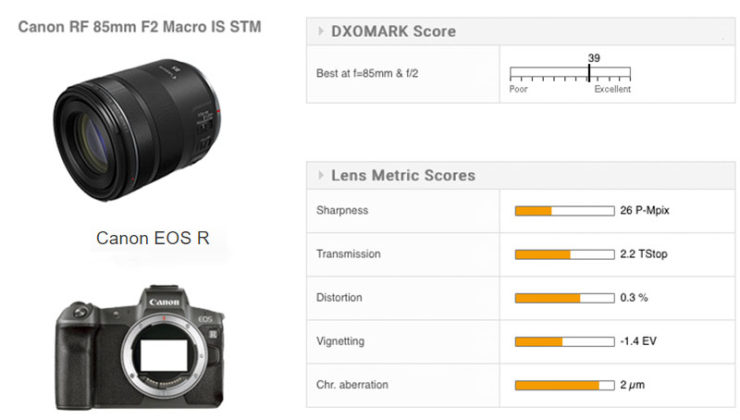 The Canon RF 85mm f/2 Macro IS STM lens has undergone DxOMark’s tests, and the result is rather surprising. Or maybe not, given that we are talking Canon and RF mount.

From DxOMark’s conclusion (emphasis mine):

After the introduction of the ultra-fast and somewhat esoteric RF 85mm F1.2L models for Canon’s new EOS R system, the more modestly priced and compact Canon RF 85mm F2 Macro IS STM is likely to placate most detractors of those early L-series who cited cost and weight as barriers to entry. As the RF mount equivalent of the highly regarded EF 85mm F1.8 version, the new lens has some interesting benefits such as stabilization and close focusing. Both features will appeal to wedding photographers, but it is the very high optical quality that will likely make this particular lens stand out and earn its place as the true replacement for the older EF version.

Admittedly, there are some points that may make potential purchasers pause, such as the slower maximum aperture, front barrel extension, and the adoption of an STM over the usually faster USM, but few can deny that this lens is an appealing alternative to those costly L-series models.

The Canon RF 85mm f/2 Macro IS STM is a very good performer, other reviews confirmed it. This lens is just a no brainer for any EOS R owner.

Combining a short-telephoto field of view with a sleek design and close-focusing performance, the RF 85mm f/2 Macro IS STM is a well-rounded lens for a range of subjects, from portraits to macro subjects. Its close focus design enables working with subject matter as close as 1.15′ away with a 1:2 maximum magnification and the STM stepping motor affords impressively quiet and smooth autofocus performance and full-time manual focus override. Helping to create sharp imagery, the lens also features optical image stabilization, along with Hybrid IS, to suppress up to five stops of camera shake for cleaner, steadier shooting. A UD (Ultra low Dispersion) element is also used in the optical design to minimize aberrations and ensure clarity. Additionally, a configurable Control Ring lets you adjust exposure settings, including ISO, aperture, and exposure compensation, from the lens itself.

Want to check out Canon EOS R7 sample photos? Here we are. All pictures can…

Here is on of the first serious Canon EOS R7 hands-on reviews. At a glance:…