Thanks Daniel for the tip. All pictures © Furtenbach Adventures, and used with permission.

There is a long interview with the guys who did it, mainly about the mountaineering-challenges, and it is in German. However, you can get a pretty decent machine translation here (at least you’ll grasp what is said). An excerpt:

Using the latest camera technology, the team led by Tyrolean expedition organiser Lukas Furtenbach, filmed all the way to the summit. It’s the first full 4K production from Mount Everest. Overall, they spent more than 1.5 hours at the top to create footage with various camera systems (including 360 ° VR cameras) for two projects of a German private television station and a cinema project.

The Canon EOS C300 Mark II was sponsored by Canon Germany as part of a case study for the company. As Lukas Furtenbach told me via email, they were very happy with the EOS C300 Mark II and its performance, which all along the way to the summit never missed a hit. The EOS C300 Mark II was operated by German cameraman Philip Flaming. The two projects mentioned above are TV-documentaries. Hope there will soon be a “making of” of these productions.

Furtenbach Adventures, the company that organised the ascension to Mt. Everest send me a brief press statement that I translated for you.

After decades there was again an expedition of a Tyrolean [Austria, editors note] organizer with special features:

We were the first commercial expedition ever which has acclimatised  at home as cohesive team high in the mountains, six weeks before the start of the expedition. This gave us an almost twice as long acclimatization time compared to other teams and we were better prepared to do the summit, could climb faster, and head right back to the secure Camp 2 (usually after having done the summit, people descends only into the more exposed Camp 4). As successive events on Mt. Everest have shown in the following days, this was the key to a safe ascent and descent. There were six deaths and more than eighty people with severe frostbite. The time our expedition had to spent on spot was far below that of most other teams, thanks to our acclimatization efforts at home. For us this is the future of commercial high altitude mountaineering, as it increases security and chances of success.

We had connected two film projects. Using the latest camera technology we shot all the way to the top. It is the first full 4K production from Mount Everest. Overall, we spent more than 1.5 hours at the top, to use the various camera systems (including 360 ° VR cameras) for two projects of a German private TV station. Our expedition also hosted the mammoth 360 Project.

[via Bergsteigen via Furtenbach Adventures]

I featured a work of Israeli  artist, director and animator Ynon Lan before (see here), so I am happy he contacted me to share another of his time-lapse works.

What you can watch in the video below is not just another time-lapse video of NYC, there is an artistic touch in it that makes it different. It combines stills photography, collage and stop motion, and was made from hundreds of still photos Ynon Lan took in the streets of New York. In his own words:

small fleeting moments captured in the camera lens are looped over and over, the small details that often go unnoticed unfold and become a thing to admire

The photos were taken in different areas all around NYC, “street photography” style, no tripod and only natural lighting.

The song “If and When” is performed by Amana Melome.

Photographer Patrick Rochon used 24 Canon EOS 5D Mark II cameras mounted on a custom build rig and connected to four computers to create the spectacular light paintings you can see in the video below.

The Phoblographer posted an interview with Patrick Rochon where he talks about the idea, and the technical challenges that had to be managed. The project was realised in Thailand.

More or less one year ago I featured Stormscapes 2, a time-lapse video by Nicolaus Wegner. Now Wegner published Stormscapes 3, another incredible journey into the world of storms, supercells and other amazing weather phenomenons.

Stormscapes 3 is for those that enjoy the visual aspect of our beautifully unique Blue Marble’s fascinating weather, or those wishing to experience elemental nature in some of its most surreal and chaotic forms. Particularly focusing on severe weather located in the northern high plains region (and adjacent ranges) of the USA. This video showcases a variety of supercells and other rotating storms, spooky night based mesoscale convective systems, atmospheric optics such as rainbows and crepuscular rays, various forms of lightning, and even a rare Shirley Basin, Wyoming tornado.

Wenger notes that “if you suffer from any negative photosensitive reactions to strobing or flashing lights, it might be advisable to skip the night focused lightning sequences” at the end of the video.

[via DIY Photography via Nicolaus Wegner]

The 2.5 minutes video above was made by photographer Julian Tryba. It’s a “layer-lapse” of the American Southwest. What’s a layer-lapse? Multiple time-lapses sequences of the exact same scene are shot over different times of the day. Portions of the footage are then mixed together into the same frame.

[via Julian Tryba via PetaPixel] 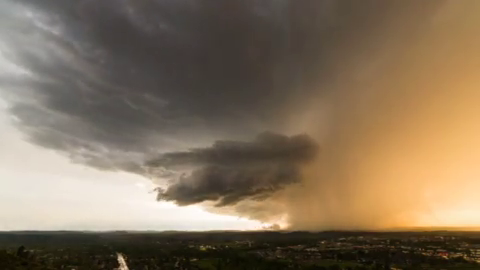 I know, there are tons of time-lapse videos out there and you are likely sick of seeing them. However, from time to time I spot a time-lapse video I think deserves to get featured.

The Chase is the work of Mike Olbinski, and the result of 14 days spent chasing storms in ten States. Says Mike:

I turned 40 years old this year and I told my wife all I wanted was 10 days chasing on the plains. She loves me though and it ended up being 14! Two days in April and then 12 straight days from May 23rd – June 3rd. Those 12 days were absolutely incredible. I’m friends with other chasers via social media, met them on the side of roads while chasing, even grabbed dinner together…but never have I felt more of a part of the chaser community than being out there for almost two weeks. Living the life…seeing the same amazing chasers over and over…it was overwhelming to me. I missed my family, it was hard at times, but it was one of the best experiences of my life.