I hate subscriptions to software. I abandoned Lightroom because of that (and now use Excire for photo management). Just sell software like in the old days. Subscriptions suck and are crap!

MELVILLE, NY, November 9, 2022 – By enabling several of Canon’s extensive lineup of EOS cameras to provide high quality video for virtual meetings and other live streaming applications, EOS Webcam Utility software was a lifeline when it was released in early 2020, when video conferencing was imperative for business operations and everyday communication. Since then, virtual video has become vital in everyday life and Canon U.S.A., Inc., a leader in digital imaging solutions, is excited to unveil EOS Webcam Utility Pro, which extends upon the success of the original software, bringing video conferencing and live streaming capabilities into an exciting new era.

The original EOS Webcam Utility software was downloaded for free by millions across the globe, with numbers rising daily, as hybrid work has become the new normal. When developing this enhanced version of EOS Webcam Utility software, Canon listened to users’ concerns and preferences found through the original version and has incorporated comments and feedback that were heard through social media, customer comments and media inquiries.

EOS Webcam Utility Pro adds a subscription that provides the option to unlock extensive new capabilities ranging from multiple camera connections, wireless connectivity, greater camera and content control, high-res upscaling in full HD mode, a maximum frame rate up to 60fps, the ability to output to multiple channels simultaneously and more. For vloggers, gamers, news anchors, cooking influencers, and the many others who rely on video, having multiple camera set-ups (like a front, side, and top-down angle) can be the key to providing more detail to the viewer. For live streamers, running multiple channels at the same time can help them reach larger audiences across YouTube, Facebook Live, and other key social and streaming channels.

There are also various settings that improve customization possibilities including various layout options, transitions between scenes, and watermark insertion, which can help users preserve the ownership of their content. Whether it is for personal or professional use, these new features can take video quality and capability to the next level.

To learn more about EOS Webcam Utility Pro and how to download and subscribe, please visit https://www.usa.canon.com/cameras/eos-webcam-utility.

If you are looking for a Canon EOS R7, B&H Photo has it in stock. 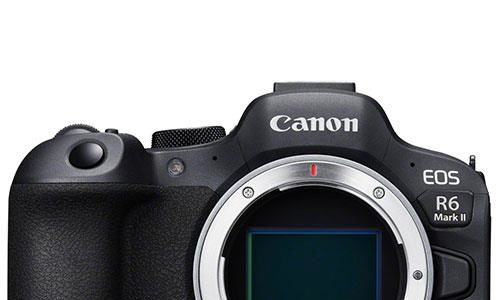 Ideal for advanced amateurs and featuring user-friendly functions, the EOS R6 Mark II camera is a high-performance hybrid camera that’s designed to capture decisive moments in both photo and video formats. It will satisfy a wide range of needs including professional production, vlogging, still pictures, filmmaking, and more. The camera is also well-suited for various photography subjects such as portrait, landscape, sports and wildlife. With the EOS R6 Mark II camera, creativity has virtually no borders.

As the market share leader for mirrorless cameras in the United States through Q3 of 2022[i], Canon continues to strengthen its innovative EOS R lineup with the new EOS R6 Mark II camera. The EOS R6 Mark II offers enhanced video and photo functions, such as in-body Image Stabilization, as well as specifications that can satisfy video production needs, such as controlled focusing.

“As a filmmaker who is always on the move, I need a camera I can trust in a multitude of environments as well as keeping up with my fast paced style of shooting and the new Canon EOS R6 Mark II does just that.” said Canon Co-Lab Creator, Sam Newton.

In addition to its compact size and ease of use, the EOS R6 Mark II camera also features:

Alongside the new camera body, Canon has announced a new addition to its growing line of innovative RF lenses – the RF135mm F1.8 L IS USM. This is a fixed focal length mid-telephoto portrait lens that is compatible with any EOS R-series camera. The RF135mm F1.8 L IS USM achieves beautiful and generous bokeh with the large-diameter F1.8 and comes equipped with in-lens Image Stabilization. The coordinated control of this IS coupled with the in-body IS present in the EOS R6 Mark II camera and other EOS R equipped IBIS cameras helps reduce camera shake and empowers photographers to express a feel of motion when shooting in dark areas with slow shutter speeds.

“The image quality and super smooth bokeh out of the new RF135mm F1.8 L IS USM lens is absolutely spectacular and superior to the EF version.” said Canon Explorer of Light, Vanessa Joy.

“The new Canon Speedlite EL-5 flash will give that magical kiss of light that brings a picture to life and illuminates your creative vision.” said Canon Explorer of Light, Bob Davis.

The Canon Speedlite EL-5 flash unit will be available in late March 2023 for an estimated retail price of $399.99*.

Demand for cameras remains solid, even amid economic slowdown, thanks to the launch of new mirrorless models and interchangeable lenses by each company. As a result, we expect the market in 2022 to be 5.45 million units, a slight increase compared to last year.

In the third quarter, thanks to the higher volume of product supply and the addition of new models, namely the EOS R7 and EOS R10, mirrorless cameras that incorporate APS-C size sensors, we posted double-digit growth in unit sales, and coupled with an increase in lens sales, a significant increase in overall revenue.

Regarding our unit sales projection for the full year, we maintained our previous projection of 2.8 million units as we will not be able to supply enough products to meet demand. Going forward, we will continue to stimulate demand by steadily strengthening our lineup of EOS R series mirrorless cameras. Cameras that incorporate full-frame sensors, like the EOS R5 and EOS R6, continue to enjoy strong support from professionals and advanced amateurs. Additionally, the 2 new cameras that incorporate APS-C size sensors, with their light-weight and small form factor appeal, are encouraging users who want to enjoy serious photography to switch from SLR cameras or step up from entry models. We have also expanded our range of RF lenses to 32 models, providing users a variety of options.

Here are some selected slides from Canon’s presentation material.

All Q3 2022 material can be seen and downloaded here. 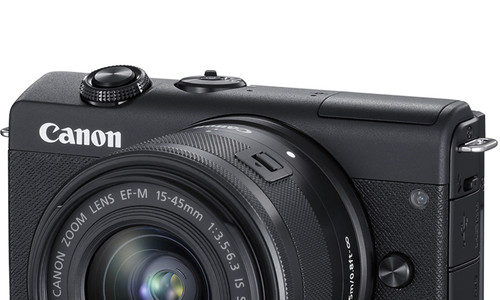 From the far East comes a hint that Canon might have discontinued the EOS M200.

If true, it means that for the time being, only the Canon EOS M50 Mark II is still in production. Will the RF mount cameras with an APS-C sensor overtake the EOS M system? And why the hell are companies still making lenses for the EF-M mount then?

Thanks to how2fly we have some images of the lens. Here they are.