Canon JP has published some sample images of the upcoming new flagship. the 1DX (all pics copyright by Canon Inc.). They look very very good.

There is also a promo-video…

This is a very interesting post by our friend Chris Gampat from thephoblographer.com.

He went to a concert with both cams and shot some pics (click here to read the post). Have a look at the images and guess which cam was used to shot the pics. Chris writes:

Recently at a concert in Brooklyn, I took the Sony NEX 5n and 50mm f1.8 along for a ride. Since I needed my 5D Mk II and 85mm f1.8 that day as well, they just happened to be on me at the time. During the concert, I got curious about their performance against one another and shot the following two photos. Can you discern which is which?

Both images were shot from approximately the same area and I tried to capture essentially the same scene. They were exposed with the same settings and focused on the same spot (ISO 800, 1/100th at f2.) Amazingly, the NEX 5n’s LCD showed me a much better image than the 5D Mk II’s LCD showed me. When brought into Lightroom 4 though, the truth came out: the images looked remarkably similar.

Images have not been edited or post-processed, except for having been reduced in size.

Imaging Resource has published a preview of the Canon G1 X (click here), and some very interesting test shots done in a lab setting (click here). RAW and JPG files are available. For each ISO setting three shots are available, each with a different noise reduction level. IMHO the images with high ISO settings are anything but bad. Check it for yourself: these are the direct links to the images with noise reduction level 2: 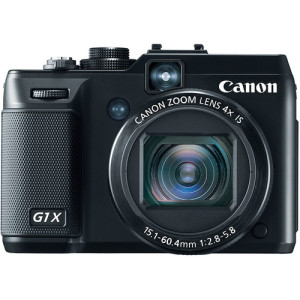