Some excerpts from the conclusion:

[…] the EOS 6D Mark II is a classic Canon DSLR. Is it particularly exciting? No, but really, neither was the original 6D aside from its fairly accessible price point. What the 6D Mark II is, though, is a solid, well-built camera that is capable of producing great images while improving upon its predecessor in almost every measurable way.

[…] the 6D II excels at high ISO values. Once you get past ISO 1600, the 6D II handily pulls away from its crop-sensor cousins and is broadly competitive with market peers.

Comparison with other cameras:

For the same price, Nikon’s D750 offers nearly the same resolution, loads more dynamic range and a far more sophisticated autofocus system. Same goes for the Sony a7 II, though that camera is even cheaper. The Pentax K-1 is an incredible value and gives you even better build quality, unique and innovative features like Pixel Shift, and far more resolution. The only thing that makes the EOS 6D II stand out is Dual Pixel AF, which turns out is only of real value in this camera when shooting single shots of slow-moving subjects or HD video.

Canon Picture Styles, available in almost all Canon cameras, are a cool way to shot a JPG the way you intend, without the hassle of post-production. Above you can watch a short introduction video. To use Picture Styles you need Canon Picture Style Editor and Canon EOS Remote Utility (here an easy to grasp tutorial for both). Both software come with your Canon camera or an be downloaded on Canon’s support pages.

We reported about Canon’s new website one month ago. Today Canon published a press release for the new site.

MELVILLE, N.Y. — A company’s website is an important tool customers utilize to research products and services in order to make educated purchasing decisions. Canon U.S.A., Inc., has recently launched a new design for its company website, www.usa.canon.com, with a responsive design that offers an inviting and enjoyable experience for its customers. This new design features beautiful, vivid imagery befitting of Canon’s position as a leader in the imaging industry. The website homepage provides an attractive, easy-to-navigate interface with featured content focused on the company’s mission to provide customers with up-to-date product information and knowledgeable insights in the area of digital imaging solutions.

“One of the main goals we wanted to achieve when designing the new website was to help our customers and business partners get to know us better and get a feel for who we are as a company,” states Ellen Pitchford, vice president and general manager, Digital Marketing Services Division of Canon U.S.A., Inc. “This new website enhances the power of the Canon brand and further demonstrates our commitment to our customers and business partners.”

Seamlessly viewable from any compatible device, customers will have access to engaging stories, informative video content and in-depth product details. The new website is optimized to be viewed across a variety of platforms – desktop, tablet or mobile – and makes it easier for visitors to get the information they need no matter what type of compatible device they are using to connect to the Internet.

Built with bringing a fun, intuitive, user-friendly customer experience in mind, features include:

Visitors also have the option of creating a ‘My Canon’ account, in order to manage their product library, expedite product registration and quickly gain access to order status.

First and foremost: It’s Canon to decide when we shall know what they are doing in their labs, and what will go into production in the next 2-3 years. Canon gave us more clues during Canon Expo 2015 than we were able to collect through rumors in the last year. So much about rumors.

Maybe the best lesson we learned from Canon Expo 2015 is that all the Canon rumors mean very little at the end of the day. If it wasn’t for the Canon Expo, most of the stuff listed above would still be unknown to us.

No company nor technology are 100% perfect, but do not tell me that Canon is not innovating. There was more trendsetting at Canon Expo 2015 than we saw in the last 3 years from all other companies in this industry.

Btw, the next Canon Expo will be in Paris, in less than a month. Your thoughts and comments are welcome… 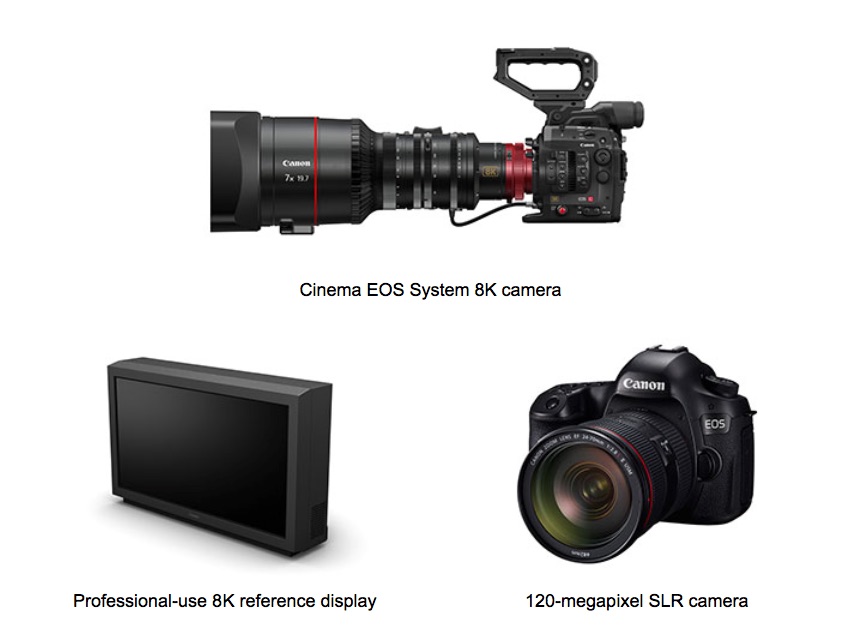 Want to get a quick insight into what Canon presented at Canon Expo 2015 in NYC? Don’t have much time? Then this video by Tony Northup is right for you. In just 5 minutes he tells about the most important features of the Canon Expo 2015 .

It’s all there. Canon’s 250MP APS-H sensor, the ISO 4.5M camera, the 120MP full-frame prototype, the (somewhen) upcoming 600mm f/4 DO BR lens, Canon’s Virtual Reality efforts, and all the rest Canon showcased at the Expo, some lens anatomy included. Forget rumors, that’s what coming in the next 2-3 years.

Did you think the Canon EOS 5Ds and EOS 5Ds R with their 50 megapixel were the ultimate resolution monster out there? Think again.

When installed in a camera, the newly developed sensor was able to capture images enabling the distinguishing of lettering on the side of an airplane flying at a distance of approximately 18 km from the shooting location.2

With CMOS sensors, increases in pixel counts result in increased signal volume, which can cause such problems as signal delays and slight discrepancies in timing. The new Canon-developed CMOS sensor, however, despite its exceptionally high pixel count, achieves an ultra-high signal readout speed of 1.25 billion pixels per second, made possible through such advancements as circuit miniaturization and enhanced signal-processing technology. Accordingly, the sensor enables the capture of ultra-high-pixel-count video at a speed of five frames per second. Additionally, despite the exceptionally high pixel count, Canon applied its sensor technologies cultivated over many years to realize an architecture adapted for miniaturized pixels that delivers high-sensitivity, low-noise imaging performance.

Canon is considering the application of this technology in specialized surveillance and crime prevention tools, ultra-high-resolution measuring instruments and other industrial equipment, and the field of visual expression.