Both new models feature a one-inch, 20.2 Megapixel*** High-Sensitivity CMOS sensor that delivers optimal performance with an ISO range of 125 – 12,800. The sensor, along with a proprietary DIGIC 6 Image processor, creates Canon’s HS System to provide photographers with vivid and detailed still images and video, even in difficult low-light shooting scenarios.

In addition, these new cameras feature an enhanced Star Mode to provide more precise focusing sure to delight stargazers and amateur astronomers. The “Star Trails” mode is now enhanced to improve the breaks in light between star trails turning star movement into a luminous still image, while the “Star Time-Lapse Movie” mode makes beautiful video clips that show the movement of the stars against a static background of dark space.

“We continue to strive to provide photographers with a range of imaging equipment options to support each individual shooting style while still providing the features, usability, and performance they expect from a Canon camera,” said Yuichi Ishizuka, president and COO of Canon U.S.A., Inc. “Our PowerShot G-series cameras offer a range of options designed to satisfy professionals looking for a convenient back-up camera to their DSLR as well as photography enthusiasts looking for maximum image quality in conveniently compact cameras they can take with them anywhere.”

Incorporating a bright, built-in high-resolution EVF that allows photographers to more easily compose and take pictures as well as track moving subjects, the high-performance PowerShot G5 X camera also features a bright f/1.8 – f/2.8 4.2x Canon Optical Zoom Lens (focal length range equivalent to 24-100mm). With the combination of a nine-blade iris diaphragm for beautiful background blur effects and an Intelligent Image Stabilization (IS) system that provides virtually shake-free images in a wide variety of shooting conditions, this camera’s optical system enables users to capture the shot as they envisioned it and is ideal for shooting in low-light conditions or when a shallow depth-of-field is preferred for more dramatic, soft backgrounds and beautiful portraits.

Housed in a classic black body, the enhanced controls include top-mounted mode and exposure compensation dials, front and rear control dials, and a control ring around the lens, which can all be customized to best suit different shooting styles. The PowerShot G5 X camera also features a built-in flash plus a dedicated hot shoe providing full compatibility with Canon’s powerful range of EX-series Speedlites and related accessories. There is also a 3.5mm mini-jack for compatibility with Canon’s Remote Switch RS-60E3.

Slim and lightweight, the PowerShot G9 X is the camera photographers will want to show off to their friends as much as they shoot with it. The camera features a bright f/2.0 – f/4.9, 3x Canon Optical Zoom Lens (focal length range equivalent to 28-84mm) along with Canon’s Intelligent Image Stabilization (IS) system for virtually shake-free images in a wide variety of shooting conditions.

The camera’s intuitive three-inch LCD touch panel with a new user interface allows for quick and easy changes to camera settings even while taking pictures. In addition to the touch panel, a lens-mounted control ring can be utilized to adjust several functions, including customizable manual focus. For shooting fast-moving subjects from kids at birthday parties to athletic events, the PowerShot G9 X camera has continuous shooting speeds up to six frames per second (fps) so none of the action is missed. It is available in classic black, or in a retro-style, silver-gray body with brown stitched leather accents.

Both new PowerShot models incorporate a broad range of exposure modes from fully automatic to full manual, and both offer users the choice of RAW as well as JPEG recording modes for still photos. Additionally, both new models incorporate a built-in ND filter for enhanced exposure control in bright shooting conditions.

The PowerShot G5 X and PowerShot G9 X camera kits are scheduled to begin shipping in November 2015 at suggested retail prices of $799.99 and $529.99, respectively.

After the Canon EOS M10, also the Canon Powershot G5 X is listed at the Canon Direct Store. Product description:

Great Images Are in Your View

The first PowerShot G-Series camera to incorporate a full-featured 2.36 million dot electronic viewfinder, the amazing PowerShot G5 X camera makes it simple to compose, set and capture high-quality stills and video without taking your eye away from the camera. For photography in the glare of bright sunlight, recording HD Video in an auditorium and other situations where the lighting is difficult or using the LCD monitor is inconvenient, the PowerShot G5 X’s electronic viewfinder helps enable unfettered operation. Full control is made simple with dedicated dials situated around the camera that let you easily customize and control the settings. What’s more, helpful features like a built-in accessory hot shoe and a multi-angle, capacitive touch screen monitor serve to create an experience as unique as the subject being recorded. With its phenomenal and large imaging sensor, its marvelous electronic viewfinder and comprehensive operation, the PowerShot G5 X can deliver performance that’s easy to see.

At the heart of the PowerShot G5 X camera is a brilliant 1.0-inch 20.2 Megapixel* High-Sensitivity CMOS sensor. Physically larger than the sensors found in most compact cameras, the PowerShot G5 X’s sensor works in tandem with Canon’s DIGIC 6 Image Processor to quickly deliver gorgeous, high-resolution images with nuanced details, plus impressive low-light performance with a low signal-to-noise ratio and minimal noise and distortion. Suitable for tremendous enlargements, significant cropping and many other applications appealing to the advanced photographer, images and video captured on the PowerShot G5 X’s sensor are engineered to impress even the most critical eye.

To take advantage of its large, 1.0-inch imaging sensor, the PowerShot G5 X camera has a sharp and versatile 4.2x Optical Zoom lens. With a 35mm equivalent range of 24–100mm it’s equally suitable for landscapes, portraits, group photographs and even close-up photography. Designed to perform in numerous lighting situations, the PowerShot G5 X’s lens has a bright maximum aperture of f/1.8 for low light performance, a 9-blade aperture for beautiful, blurred background detail and is engineered to focus from distances as close as 2.0 in. The PowerShot G5 X’s lens works in concert with the camera’s sensor and image processor to reliably deliver sharp images from edge to edge and from wide-angle to telephoto, all tailored to meet the exacting standards of even critical photographers.

The PowerShot G5 X camera’s defining feature is its unique, high-definition electronic viewfinder. It’s great for photographers who prefer to hold the camera up to their eye, and is a veritable lifesaver in bright light and when composing on the camera’s LCD screen is inconvenient or overly conspicuous. Featuring 2.36 million dots, and with a wide color gamut, it provides a high-contrast, realistic and smooth edge-to-edge view for image composition, adjustment and review. Designed for sustained use, it delivers 100% image coverage, a smooth refresh rate up to 120 frames-per-second (Smooth Mode) and a flexible information display that can enable comfortable camera operation throughout the day. Its 22mm eyepoint delivers excellent visibility, even when wearing glasses, and a built-in eye sensor helps the PowerShot G5 X to transfer quickly between the viewfinder display and Live View on the camera’s LCD.

Designed for speedy operation while looking through the viewfinder, the PowerShot G5 X camera features a host of controls for quick, accurate settings and adjustments. Beyond its Vari-angle touch panel LCD monitor, the PowerShot G5 X features a front dial situated on the front of the camera for operation with the index finger, a top-mounted, thumb-operated exposure compensation dial, a rear-mounted control dial plus a control ring around the camera’s lens. Eminently customizable, each dial has an optimized operating torque that helps to identify it by feel, for sustained, intuitive and near-silent operation in quiet situations like weddings and performances.

The PowerShot G5 X camera’s hot shoe enables expanded operations for advanced photography. It’s compatible with all Speedlite flashes for the EOS System, so bounce flash and multiple-flash photography is easy to achieve. Whether attaching a Speedlite flash or the Remote Switch RS-60E3 for long exposures or night scenes, the PowerShot G5 X’s hot shoe can help provide shooting opportunities far beyond the scope of most compact cameras. 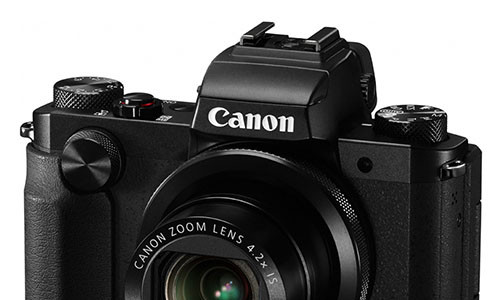 Two new images of the upcoming Canon Powershot G5 X leaked at Digicame Info. You can see that the G5 X has a tillable display. A supposedly complete list of the gear Canon will announce very soon has also been posted. 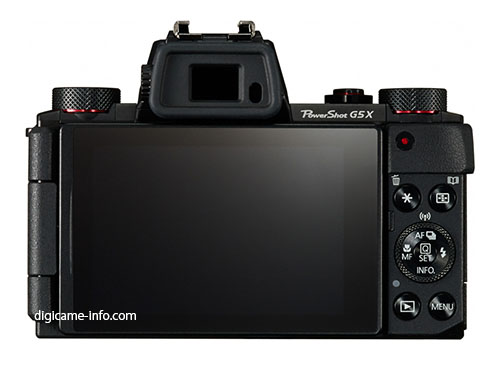 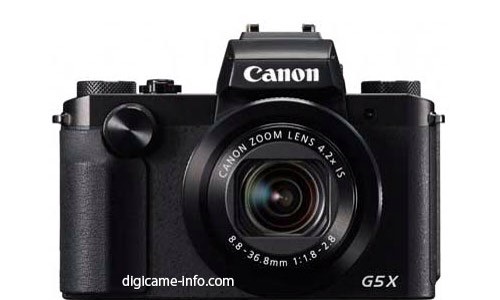 Specifications and images of the upcoming Canon Powershot G5 X and Powershot G9 X leaked at Digicame Info. The announcement is expected very soon, possibly a matter of a few days.