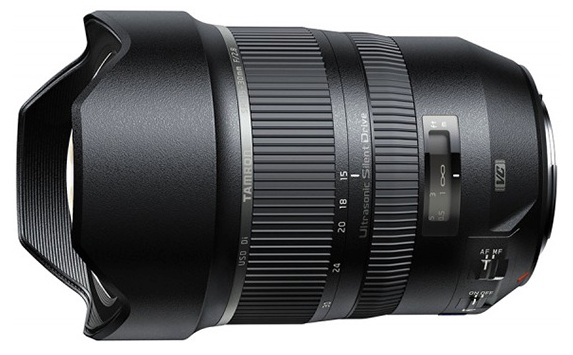 Product highlights and specs after the break.

With an optical construction of 18 elements in 13 groups, inclusive of XGM (eXpanded Glass Molded Aspherical) element placed at the front group and several LD (Low Dispersion) glass elements in the system, aberrations such as geometrical distortion and lateral color are efficiently compensated for enabling the zoom lens to deliver outstanding image quality throughout the entire range from corner to corner.

Recognizing the needs for image stabilization capability on a wideangle lens voiced by a number of photographers, especially for a full-frame, fast F/2.8 ultra-wide-angle zoom lens category, VC is tuned for providing discernible competence throughout the entire zoom range. The feature enhances image depicting capabilities for shooting night scenes and under low light conditions.

Benefit of the eBAND*2 and the improved BBAR coatings

Tamron’s acclaimed BBAR (Broad-Band Anti-Reflection) coating is further refined to render uniformity in transmissivity across the critical bandwidths. Coupled with the eBAND coating, ghosting and flare typically observed on ultra-wideangle lenses are efficiently eliminated, resulting in crisper and crystal-clear images.

Due to the large diameter and the prominent convex profile of the front element, it is not practical to deploy a protective filter. For the first time, a fluorine coating is applied to the front element, which repels water or any type of dirt, while making it easier to remove such smudge when contaminated.

Fascinating background “bokeh” with the fast maximum aperture of F/2.8

Natural and smooth blur on the subject background enhances depictive capabilities of wide-angle photography when a subject is located in the close distance. The 9-blade diaphragm construction retains a near-circular aperture opening even when stopped down by two steps from its full open position and delivers ideal bokeh effects.

Speed of autofocus and control accuracy are further improved. USD*3 (Ultrasonic Silent Drive) delivers tack-sharp images due to the high torque and fast response speed with least amount of lag time, yet with extremely low acoustic noise. Equipped with a full-time manual focus mechanism, fine focus adjustments are enabled without exiting from the AF mode.

The SILKYPIX Developer Studio software provides an added feature to generate high-quality images from RAW data, while performing adjustments to reflect a personal style and a taste of the photographer. These include white balance, color, sharpness, and the tonal curves recorded by digital cameras.

The SILKYPIX Developer Studio for Tamron provides a range of functions, in addition to the basic adjustment capabilities, such as correcting aberrations (lateral color, distortion, relative illumination fall-off) referring to the optical design data. Optimal use with Tamron’s SP series lenses – renowned for their high-depiction capabilities – delivers images that meet photographers’ most exacting demands.

*Length and weight are based on figures for the Canon-mount and Nikon-mount lens.
Length represents the dimension from the barrel top to the mount flange surface.

*4 This circular diaphragm retains a near-circular shape even when stopped down by two steps from the wide open aperture.

*5 The Sony mount does not include VC, since Sony digital SLR bodies integrate built-in image stabilization functionality. The product name for Sony cameras is “SP 15-30mm F/2.8 Di USD (Model A012)”, without the VC designation.

Specifications, appearance, functionality, etc. are subject to change without notice.