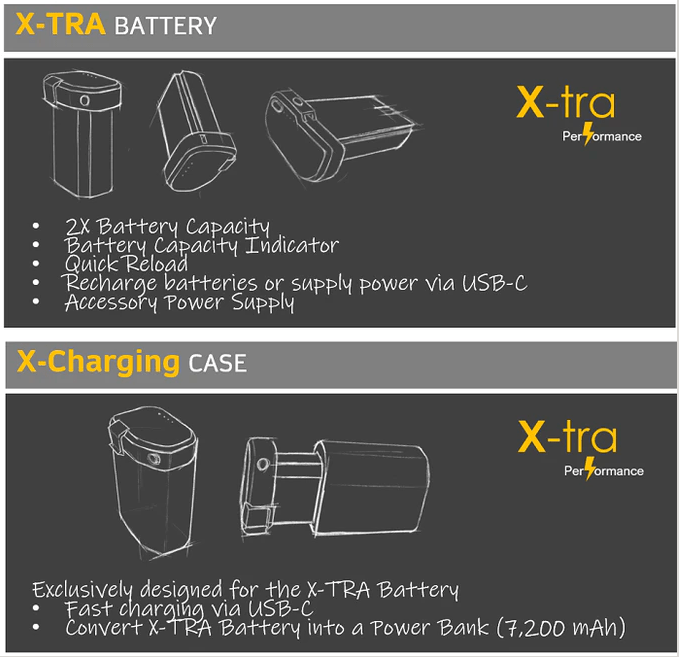 We all know the issue with the camera battery, especially the pros: you carry around many batteries to not run out of juice for your camera(s). A new Kickstarter project tries to tackle this from a new angle.

X-tra is a group of photographers and engineers who are into NATGEO photography and videography. They are behind the X-tra battery we are featuring here. At a glance:

You can support the X-tra battery project on Kickstarter.

This is how the guys behind X-tra see it:

For many photographers, power is a major struggle. If you’re shooting video or working in live-view, a battery charge never seems to last, so you’re stuck carrying 3 or 4 batteries in your kit. X-tra battery is here to solve that problem and simplify your kit with one revolutionary accessory.

Think it’s hard to get excited about a battery? For most gear heads, power solutions and batteries have generally been the least sexy accessories there are, until now. The X-tra battery solves multiple photography headaches and even offers some solutions you didn’t know you needed but soon won’t be able to live without.

For starters, in terms of power capacity, the X-tra holds 3,700 mAh, which is two times the charge of Canon’s LP-E6. Previously the only option for a double capacity battery was to use two separate batteries within a battery grip, so lots of photographers will potentially be able to eliminate an additional piece of bulky equipment. The X-tra is a full-size camera battery, similar in size to the battery found in the Canon 1DX. The physical profile of the X-tra extends just beyond the bottom of the battery compartment on compatible camera models, providing a solid grip for larger hands and a comfortable, extra secure feel. Because the X-tra requires the camera’s battery door to be removed, you can quickly change out batteries with one hand without fumbling with a battery compartment door. When it is time to swap batteries, it’s a super fast and easy process. Just press up on the battery to release it and replace it with a fresh one.

MORE AFTER THE BREAK

Unless you have a foolproof personal battery charging system (dead batteries in a certain compartment, or if the battery cap is on its charged, etc.), it’s easy to get charged batteries mixed up with dead batteries in your bag. Anyone who has ever replaced a dying battery with a dead one (it happens to me every so often), knows it’s a pain in the butt and grinds your shoot to a halt. The X-tra was designed with that common issue in mind and features a charge level indicator to help avoid dead battery headaches. Unlike other batteries that you have to load in the camera to test, the X-tra will show you just how much juice you have left quickly and easily. With the press and hold of a button, you’ll be able to see just how much charge the X-tra still has with up to four illuminated indicators, saving you time and irritation.

For the times when you need to have your camera in constant operation beyond the life of a single battery, no matter how big its capacity, you can plug the X-tra into another source of external power via USB-C connection. Planning on shooting a 12-hour time-lapse? The X-tra has you covered with direct charging, no battery swaps necessary. Whether you plug into a wall outlet, a car charger, or another larger battery, you have the flexibility to keep shooting for long periods of time.

The X-tra utilizes the same technology as Tesla in its batteries, so the batteries are durable and stable in any environmental condition. X-tra also features ultra-low internal resistance to secure voltage stability and excellent performance for extended continuous shooting. Thanks to an integrated microchip, the X-tra keeps track of when the battery is fully charged and will prevent overcharging, extending the life of the battery.

Another cool feature is the option to plug peripheral gear and accessories into the X-tra battery even while it’s in use by your camera. Using a cold-shoe LED light that requires an external power source? Plug it into the X-tra via the USB-C port and you’ll be able to power both your camera and light simultaneously. This will be a great space saver for photographers and videographers alike. Whether you’re using a powered gimbal, a microphone, or other peripheral gear, you’ll be able to provide power seamlessly as you work.

The X-tra comes with a special fast-charging case which serves two purposes. First, it allows you to charge your X-tra battery surprisingly quickly via USB-C. Second, the X-tra battery can be used as a power bank for any device when mounted in the charging case, so you can even recharge your phone on the fly.

The X-tra is currently compatible with the following cameras by Canon, Sony, and Blackmagic with planned Nikon availability coming soon:

In designing the X-tra it seems like they thought of everything you could possibly want or need. Get ready to pack lighter, shoot longer, and enjoy a variety of conveniences thanks to a well designed, unparalleled piece of gear.

Nikon Released The Smallest And Thinnest Full Frame Lens Ever