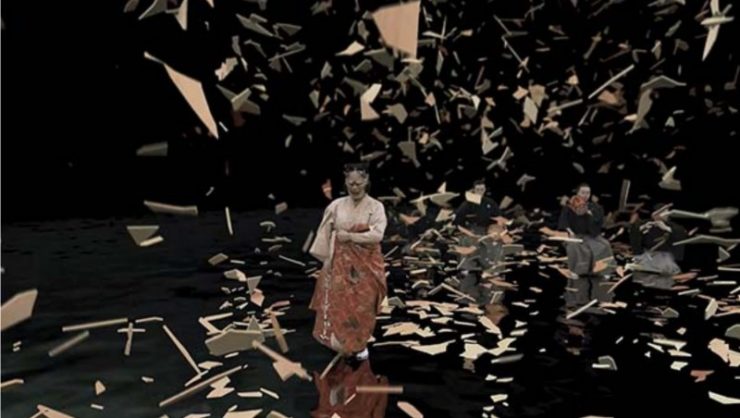 A scene from the "Lady Aoi" volumetric video (image © Canon)

Volumetric video technology entails the use of digitalized 3D spatial data, which is rendered by computers to create a virtual space in which video can be generated from any angle. This technology has attracted significant interest in the sporting world and is becoming increasingly widespread in the entertainment industry. In addition, Canon has implemented this technology during an international rugby tournament in 2019 as well as other sporting events. In July 2020, the company established its Volumetric Video Studio – Kawasaki, to expand its range of activities in the entertainment industry.

In this joint project both companies have leveraged their combined technologies, products and networks to propose a volumetric video solution for the visual and performing arts community, with the aim of exploring new business opportunities and creating and growing new value for audiences. In particular, Canon contributes its volumetric video technology, which makes possible nearly simultaneous video capture and generation of high-resolution video. Through this technology, the company provides a new method for video content production and audiovisual experiences, in addition to passing on valuable cultural traditions.
Leveraging its know-how and experience in the field of art, IBM Japan provides consulting services that include business strategies and project execution support for companies involved in the arts in order to help the visual and performing arts achieve a digital transformation.

The first project created through this corporate partnership is the release today of a performance of the Noh theatre work “Lady Aoi,” produced by Hoshokai and utilizing volumetric video technology. Directed by Kazufusa Hosho, Head of the Hosho Noh Style, the performance gracefully flows between scenes of the Noh stage and the spiritual world. For the creation of the video, Canon obtained 3DCG data of a real-life Noh stage, generated dynamic backgrounds and CG animations, and captured video of the Noh actors’ performance at the Volumetric Video Studio – Kawasaki. These resources were then smoothly integrated into the completed product, right there at the studio. IBM Japan provided high-speed infrastructure and technological support through its IBM Power Systems AC922 advanced dedicated parallel processing server and IBM Elastic Storage System broadband storage technology, enabling the use of essential responsiveness required for real-time video rendering.

Through this partnership, both Canon and IBM Japan will aim to create new value within the visual and performing arts world while expanding the potential use cases of volumetric video technology.

Comment from Kazufusa Hosho, Head of the Hosho Noh Style

The emotional state of Lady Rokujo, the main character in Lady Aoi, is beautifully expressed through the integration of volumetric visuals and 3D graphics that depict traversing back and forth from the Noh stage and the spiritual world. During the production process, I placed strong importance on how to convey the powerful impact of the story when it is finally ready for audiences to enjoy. Thanks to this volumetric video technology, I believe we have created a way of viewing performances unlike anything on the traditional stage.

Canon’s Volumetric Studio Kawasaki is a visual recording studio that can capture performers’ movements from every possible angle. More than 100 4K cameras are utilized to capture video that is subsequently rendered by computers into 3D data inside a virtual space. Inside this virtual space, content can be viewed from any angle, making possible new kinds of visual expression. Recording and content generation can be performed separately, helping contribute to more efficient workflows. The studio is located within Canon’s Kawasaki office (70-1 Yanagicho, Saiwai-ku, Kawasaki, Kanagawa 212-8602, Japan) and began operations in July 2020. To date, the studio has completed such projects as music-related content, variety TV programs, documentaries, TV commercials, promotional videos and collaborations with the traditional Japanese performing art of Kabuki and Noh theatre. In addition, Canon uses its capabilities to generate volumetric video in real time to create new forms of experiential visual entertainment including such events as live-streamed performances.