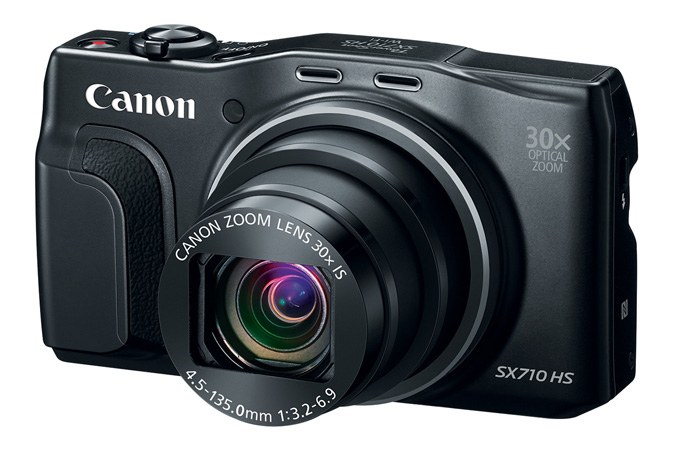 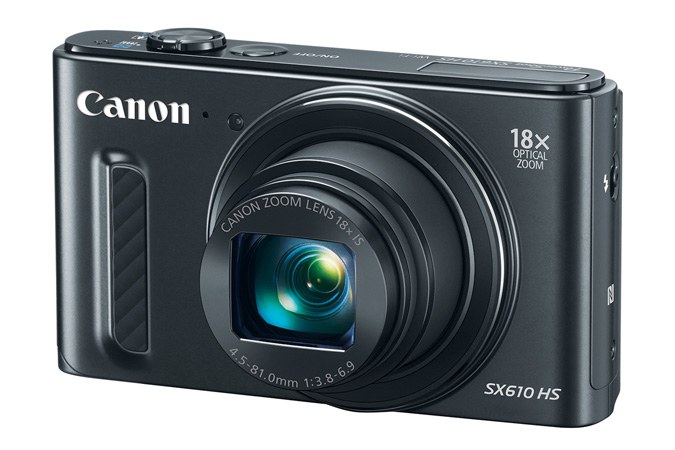 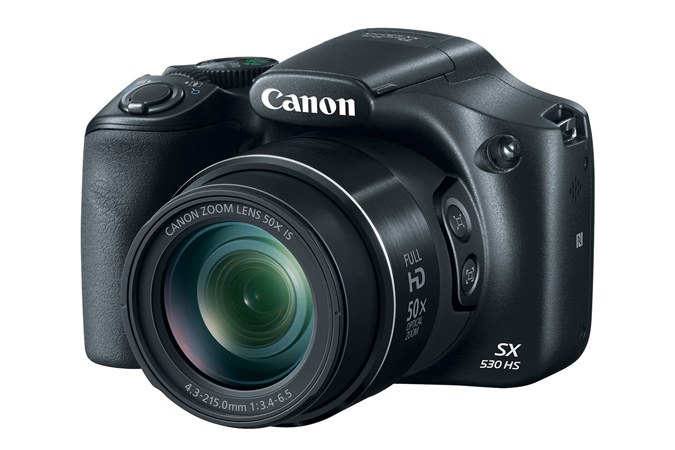 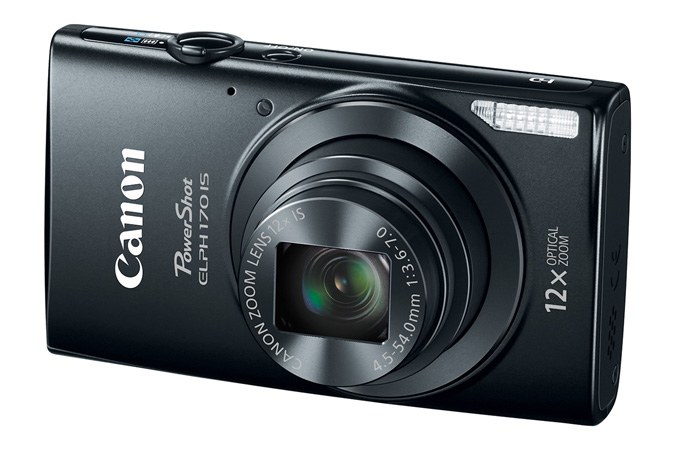 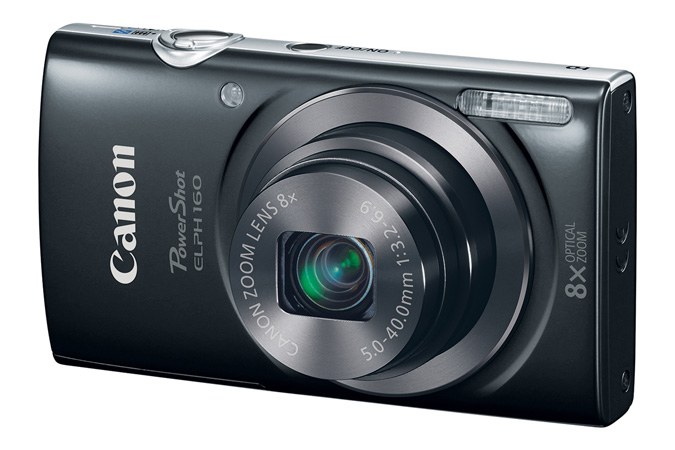 “As our customers’ desire for superb imaging devices to help them create amazing images and video grows, Canon U.S.A. is dedicated to providing digital cameras that have the features and functions to easily capture their most important moments,” said Yuichi Ishizuka, president and COO, Canon U.S.A., Inc. “With these five new PowerShot digital cameras, Canon hopes that users will capture and share their favorite moments, without compromising image quality.”

The three new PowerShot SX series cameras (the PowerShot SX530 HS, the PowerShot SX710 HS and the PowerShot SX610 HS) feature optical zoom ranges of 50x, 30x and 18x, respectively – making them powerful enough to capture images close-up as well as from a distance. The built-in Wi-Fi® and NFC™ connectivity options in the new PowerShot SX cameras allow users to easily share beautiful images online with family and friends by connecting to a compatible smartphonei, tablet or Wi-Fi enabled computer. Experiencing the power of a printed image is also easy when users connect and print to a Canon wireless PictBridge certified printer, like the Canon PIXMA MG7520. And for even more convenience, the cameras are compatible with the new Canon Connect Station CS100 – a dedicated device for easy and safe image and video viewing, sharing and storage.

The PowerShot SX530 HS digital camera builds on the features included in the PowerShot SX520 HS digital camera. With a 50x Optical Zoom lens (equivalent to 24-1200mm) and Canon’s Optical Image Stabilization, the camera is ideal for those with active lifestyles who want to take high-quality close-up shots of their travel adventures or weekend getaways. And with Wi-Fi and NFC capabilities, users can easily share and print their special images wirelessly. In addition to featuring a powerful optical zoom range and wireless options, the SX530 HS digital camera combines a16 Megapixelii High-Sensitivity CMOS sensor and Canon’s DIGIC 4+ Image Processor to create the Canon HS System allowing for excellent low-light performance.

Giving users the ability to capture life in motion, the camera features a dedicated movie button so users can easily record 1080p Full HD video utilizing the camera’s full 50x Optical Zoom capability. In addition, Intelligent IS enables the camera to automatically choose the best settings to help optimize image stabilization for virtually shake-free images and video in various shooting conditions. The camera’s high-speed AF allows users to autofocus quickly to help capture every shot with ease. The PowerShot SX530 HS digital camera’s advanced Zoom Framing Assist feature intelligently controls the lens, making it easy to identify the main subject of the shot, even when the subject is moving.

Based on the successful PowerShot SX700 HS model, the PowerShot SX710 HS digital camera features Wi-Fi and NFC connectivity with an impressive 30x Optical Zoom lens (equivalent to 25-750mm). The 20.3-Megapixelii High-Sensitivity CMOS sensor and Canon’s DIGIC 6 Image Processor work together to create the Canon HS System allowing for excellent low-light performance. In addition, the camera’s Intelligent IS helps optimize image stabilization in a variety of shooting conditions whether shooting stills or video.

Zoom Framing Assist helps make it easier to keep distant subjects in the field of view, even if the subject is in motion. The camera also records high-quality 1080p Full HD video at up to 60 frames per second through a dedicated movie button. Hybrid AUTO automatically recognizes the scene and optimizes camera settings to capture the high image quality for still photos while simultaneously creating a great looking highlight reel in 720p HD video.

The PowerShot SX710 HS digital camera also features Creative Shot mode and Short Clip mode for artistic and creative photos and videos. Using Story Highlights mode, the camera creates a highlight reel of selected images using a range of optional special effects such as Fast Motion and Slow Speed, creating a unique imaging experience perfect for sharing with family and friends. The images can be selected automatically based on events, date, Face ID, or the selection can be customized based on photos hand-picked by the user. The result is an exciting highlight reel that can be accompanied by music options provided with the camera, without the use of external editing software.

The PowerShot SX710 HS digital camera is scheduled to be available in February 2015 for an estimated retail price of $349.99.

The PowerShot SX610 HS digital camera features Wi-Fi and NFC connectivity options as well as an impressive long-zoom range in a compact point-and-shoot body. The Power Shot SX610 HS camera’s powerful 18x Optical Zoom lens (equivalent to 25-450mm) provides users with high-quality optics in a pocket-sized camera body. The PowerShot SX610 HS camera combines a 20.2-Megapixelii CMOS sensor and Canon’s DIGIC 4+ Image Processor to create the Canon HS System allowing for excellent low-light performance. With Auto Zoom mode enabled, the camera will automatically frame the subject of a shot by zooming in and out to produce a crisp, clear image with pin-sharp focus.

The PowerShot SX610 HS digital camera is scheduled to be available in February 2015 in red, white or black for an estimated retail price of $249.99.

The PowerShot ELPH 170 IS digital camera is slim and stylish boasting a 12x Optical Zoom lens (equivalent to 25-300mm) and 20-Megapixelii CCD sensor, enabling users to take photos and video that deliver a powerful and share-worthy story. With Intelligent IS, users have the ability to capture images that are virtually shake-free in a variety of shooting situations. The PowerShot ELPH 170 IS digital camera also captures crisp, smooth 720p HD video footage quickly and simply by pressing the dedicated movie button.

With Smart AUTO mode, the camera automatically chooses the optimal settings to help ensure the best possible image is taken, and with creative effects like Fisheye, Toy Camera and Monochrome users can take images to a new artistic level. For those who are constantly on the move, the camera is outfitted with ECO mode to help extend battery life allowing more photos to be taken over a longer period of time.

The PowerShot ELPH 170 IS digital camera is scheduled to be available in February for an estimated retail price of $149.99 in a variety of colors – blue, silver and black.

The PowerShot ELPH 160 digital camera is also scheduled to be available in February for an estimated retail price of $119.99 in four colors – black, white, silver and red.

Canon U.S.A., Inc., is a leading provider of consumer, business-to-business, and industrial digital imaging solutions to the United States and to Latin America and the Caribbean (excluding Mexico) markets. With approximately $36 billion in global revenue, its parent company, Canon Inc. (NYSE:CAJ), ranks third overall in U.S. patents granted in 2013† and is one of Fortune Magazine’s World’s Most Admired Companies in 2014. In 2014, Canon U.S.A. has received the PCMag.com Readers’ Choice Award for Service and Reliability in the digital camera and printer categories for the 11th consecutive year. Canon U.S.A. is committed to the highest level of customer satisfaction and loyalty, providing 100 percent U.S.-based consumer service and support for all of the products it distributes. Canon U.S.A. is dedicated to its Kyosei philosophy of social and environmental responsibility. In 2014, the Canon Americas Headquarters secured LEED® Gold certification, a recognition for the design, construction, operations and maintenance of high-performance green buildings. To keep apprised of the latest news from Canon U.S.A., sign up for the Company’s RSS news feed by visiting www.usa.canon.com/rss and follow us on Twitter @CanonUSA. For media inquiries, please contact pr@cusa.canon.com.

Specifications subject to change without notice.

i For Wi-Fi connectivity: Compatible with iOS versions 6.0/6.1/7.0/7.1/8.0/8.1, Android smartphone versions 2.3.3/4.0/4.1/4.2/4.3/4.4 and Android tablet versions 4.0/4.1/4.2/4.3/4.4. Data charges may apply. With the download of the free Canon Camera Connect(Powershot SX710 HS and SX610 HS) or Canon Camera Window(PowerShot SX530 HS) app. This software helps enable you to upload images to social network services. Before uploading images, please be aware that image files may contain privacy-related information such as people and places. If necessary, please delete such information. Canon does not obtain, collect or use such images or any information included in such images through this software. For NFC connectivity: Compatible with Android devices version 4.0/4.1/4.2/4.3/4.4.

ii Image processing may cause a decrease in the number of pixels.

Here is Fujifilm with another one of their winning mirrorless cameras: the Fujifilm X-E4. Looks…

Canon will soon release a new mixed reality headset, the Canon MREAL S1. Not the…