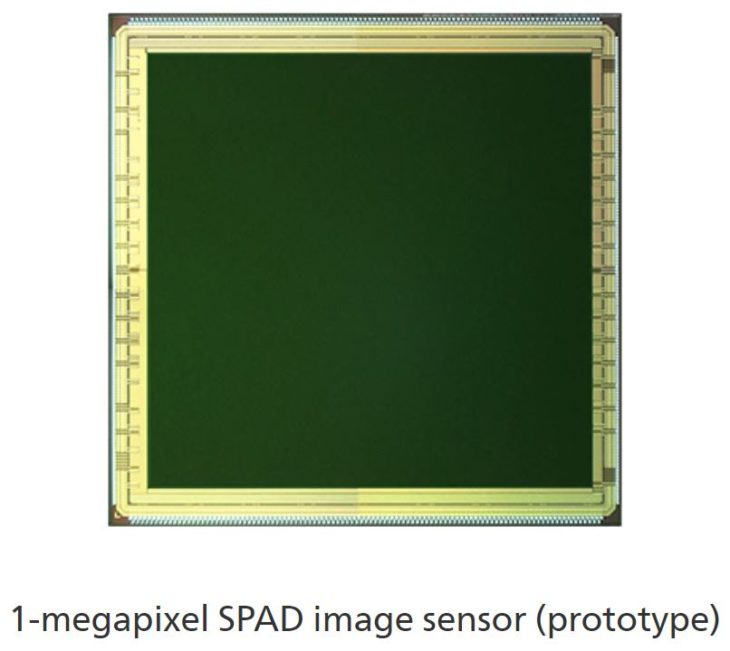 The camera utilizing the sensor described in the press release below were jointly developed with scientists at the Swiss Federal Institute of Technology in Lausanne. A scientific article was also published: Megapixel time-gated SPAD image sensor for 2D and 3D imaging applications

TOKYO, June 24, 2020—Canon Inc. announced today that the company has developed the world’s first1 single photon avalanche diode (SPAD) image sensor with signal-amplifying pixels capable of capturing 1-megapixel images. SPAD image sensors are ideal for such applications as 2-dimensional cameras, which capture and develop still image and video in an extremely short span of time. These sensors also hold potential for use in 3-dimensional cameras due to their ability to obtain information about the distance between them and a subject as image data.

A SPAD sensor is a uniquely designed image sensor in which each pixel possesses an electronic element. When a single light particle, called a photon, reaches a pixel it is multiplied—as if creating an “avalanche”—that results in a single large electrical pulse. The ability to generate multiple electrons from a single photon provides such advantages as greater sensitivity during image capture and high precision distance measurement.

The SPAD image sensor developed by Canon overcomes the longstanding difficulties of achieving this effect with high pixel counts. By adopting new circuit technology, Canon’s sensor uses a method known as photon counting to realize a digital image resolution of 1 megapixel. What’s more, the sensor employs a global shutter that allows simultaneous control of exposure for every pixel. Exposure time can be shortened to as little as 3.8 nanoseconds2, making possible clear and distortion-free image capture. In addition, the sensor is capable of up to 24,000 frames per second (FPS) with 1 bit output, thus enabling slow-motion capture of fast movement within an extremely short time frame.

Thanks to its ability to capture fine details for the entirety of events and phenomena, this technology holds the potential for use in a wide variety of fields and applications including clear, safe and durable analysis of chemical reactions, natural phenomena including lightning strikes, falling objects, damage upon impact and other events that can’t be observed with precision by the naked eye.

The sensor also features a high time resolution as precise as 100 picoseconds2, enabling it to determine the exact timing at which a photon reaches a pixel with ultra-high accuracy. Leveraging this functionality, the sensor is capable of Time of Flight distance measurement. What’s more, with a high resolution of 1 megapixel and high-speed image capture, it is also able to accurately perform 3D distance measurements in situations where multiple subjects overlap—useful in such scenarios as a vehicle distance measurement for self-driving automobiles and grasping 3D spatial information for xR3 and similar devices.

Canon’s development of a SPAD image sensor enables 3D cameras capable of recognizing depth information to achieve a resolution of 1 megapixel is expected to rapidly expand the use of such cameras as the “eyes” of high-performance robotic devices. Going forward, Canon will strive to anticipate the needs of industry by continuing to advance its innovative image sensor technology, further expand the possibilities of what is visible, spur evolution in science and industry through high-precision detection of information and contribute to the development of fields yet to be discovered.

[more about SPAD sensors after the break]

The camera utilizing the sensor described in this press release, and its accompanying journal article, were jointly developed and written with scientists at the Swiss Federal Institute of Technology in Lausanne and published in Optica, the journal of the Optical Society of America.

A Single Photon Avalanche Diode (SPAD) sensor is a specially configured sensor in which a diode is placed within each pixel. Each diode, when receiving a single incoming photon of light, is able to turn this photon into an “avalanche” of electrons to create a single large electrical pulse signal. With the ability to convert a single photon into multiple electrons, this technology can contribute to greater sensitivity during photography as well as more accurate distance measurements.

SPAD sensors output a signal based on the number of generated pulses it counts. Although able to detect a single photon, each pixel requires its own memory or a counter, and conversion of a photon into multiple electrons requires a high voltage and consequently a high-voltage-resistant structure with sufficient insulation capabilities. Such requirements inevitably lead to larger pixels, and as a result, miniaturization and increased pixel counts have thus far proven difficult to realize. However, in recent years, there has been great progress in 3-dimensional stacking technologies, which has reinvigorated R&D efforts in the field.

In recent years, SPAD sensors have been used in various existing devices and equipment. Currently, smartphones utilize proximity sensors to determine the distance between the device and physical objects around it. In the field of medicine, these sensors are also used to detect radiation for the purpose of detecting cancer in early stages, such as Positron Emission Tomography (PET).

In physics, photon counting refers to the technique by which optical sensors count the number of photon particles, the smallest unit of light, and thereby determine such parameters of signal light as intensity and time distribution.

Photon counting treats light as digital signals, and can eliminate the interference from electronic noise, enabling highly accurate detection of weak signals. Additionally, when utilized with dedicated processing circuitry, photon counting can accurately detect not only the amount of light, but also the precise time at which the photon is detected.

Time of Flight (ToF) measurement is a method for determining the distance between a sensor and another object. Distance is measured based on how quickly light emitted from a light source, travelling at light-speed (300,000 km/s), reflects off the target object and returns to the sensor.

Because light travels at such incredibly fast speed, distance calculation using the ToF method must be performed in a span of between 1 nanosecond (one billionth of a second) and one picosecond (one trillionth of a second)—and therefore requires an optical sensor capable of responding to such a high-speed regime with precision.

The sensor also features a high time resolution as precise as 100 picoseconds, enabling to determine the exact timing at which a photon reaches a pixel with ultra-high accuracy. Leveraging this functionality, the sensor is capable of Time of Flight distance measurement. When utilizing ToF measurement by equipping a light-emitting device (or camera using a specialized sensor) with a SPAD image sensor, the time duration between pulse light being directed at an object and the light returning to the sensor is used to determine the physical distance between the sensor and the subject. SPAD image sensors utilizing the ToF method can be easily installed on various devices and can measure depth information including 3D distance with extraordinary precision, even in dark environments. This capability holds the promise of use in such applications as distance measurement between vehicles for self-driving automobiles and grasping 3D spatial information for xR and similar devices.

How To Make A Working Lens Out Of Sand And Rocks

If you are particularly keen to difficult DIY projects, this one may be for you.…