The camera utilizing the sensor described in the press release below were jointly developed with scientists at the Swiss Federal Institute of Technology in Lausanne. A scientific article was also published: Megapixel time-gated SPAD image sensor for 2D and 3D imaging applications

TOKYO, June 24, 2020—Canon Inc. announced today that the company has developed the world’s first1 single photon avalanche diode (SPAD) image sensor with signal-amplifying pixels capable of capturing 1-megapixel images. SPAD image sensors are ideal for such applications as 2-dimensional cameras, which capture and develop still image and video in an extremely short span of time. These sensors also hold potential for use in 3-dimensional cameras due to their ability to obtain information about the distance between them and a subject as image data.

A SPAD sensor is a uniquely designed image sensor in which each pixel possesses an electronic element. When a single light particle, called a photon, reaches a pixel it is multiplied—as if creating an “avalanche”—that results in a single large electrical pulse. The ability to generate multiple electrons from a single photon provides such advantages as greater sensitivity during image capture and high precision distance measurement.

The SPAD image sensor developed by Canon overcomes the longstanding difficulties of achieving this effect with high pixel counts. By adopting new circuit technology, Canon’s sensor uses a method known as photon counting to realize a digital image resolution of 1 megapixel. What’s more, the sensor employs a global shutter that allows simultaneous control of exposure for every pixel. Exposure time can be shortened to as little as 3.8 nanoseconds2, making possible clear and distortion-free image capture. In addition, the sensor is capable of up to 24,000 frames per second (FPS) with 1 bit output, thus enabling slow-motion capture of fast movement within an extremely short time frame.

Thanks to its ability to capture fine details for the entirety of events and phenomena, this technology holds the potential for use in a wide variety of fields and applications including clear, safe and durable analysis of chemical reactions, natural phenomena including lightning strikes, falling objects, damage upon impact and other events that can’t be observed with precision by the naked eye.

The sensor also features a high time resolution as precise as 100 picoseconds2, enabling it to determine the exact timing at which a photon reaches a pixel with ultra-high accuracy. Leveraging this functionality, the sensor is capable of Time of Flight distance measurement. What’s more, with a high resolution of 1 megapixel and high-speed image capture, it is also able to accurately perform 3D distance measurements in situations where multiple subjects overlap—useful in such scenarios as a vehicle distance measurement for self-driving automobiles and grasping 3D spatial information for xR3 and similar devices.

Canon’s development of a SPAD image sensor enables 3D cameras capable of recognizing depth information to achieve a resolution of 1 megapixel is expected to rapidly expand the use of such cameras as the “eyes” of high-performance robotic devices. Going forward, Canon will strive to anticipate the needs of industry by continuing to advance its innovative image sensor technology, further expand the possibilities of what is visible, spur evolution in science and industry through high-precision detection of information and contribute to the development of fields yet to be discovered.

Who doesn’t need a 600MP sensor? Samsung will make one.

How big is this sensor? Not the size of a smartphone sensor because that would mean pixel almost as small as atoms. However, Samsung knows how to make image sensors. And no, Canon will not release a mirrorless camera with a 600MP sensor with 15 axis IBIS and 4 card slots anytime soon.

More about the 600MP sensor in the video and press text below.

Taking pictures or videos throughout the day has become part of our normal lifestyles and no longer done just to capture special events. Whip out your mobile camera to immortalize a delectable-looking meal, to record your latest dance moves, or even just when you’re having a good hair day, and you’re ready to share your images with friends right away. These seamless experiences have become possible thanks to remarkable advancements in recent mobile photography, and at the very heart of this revolution is the mobile chips that transform light into digital data – image sensors.

The image sensors we ourselves perceive the world through – our eyes – are said to match a resolution of around 500 megapixels (Mp). Compared to most DSLR cameras today that offer 40Mp resolution and flagship smartphones with 12Mp, we as an industry still have a long way to go to be able to match human perception capabilities.

Simply putting as many pixels as possible together into a sensor might seem like the easy fix, but this would result in a massive image sensor that takes over the entirety of a device. In order to fit millions of pixels in today’s smartphones that feature other cutting-edge specs like high screen-to-body ratios and slim designs, pixels inevitably have to shrink so that sensors can be as compact as possible.

On the flip side, smaller pixels can result in fuzzy or dull pictures, due to the smaller area that each pixel receives light information from. The impasse between the number of pixels a sensor has and pixels’ sizes has become a balancing act that requires solid technological prowess.

Drawing from the technology leadership and experience our memory business possesses, Samsung has been managing to expertly navigate this balance in our image sensors. In May 2019, we were able to announce the industry’s first 64Mp sensor, and just six months later, brought 108Mp sensors to the market.

For our latest 108Mp image sensor, the ISOCELL Bright HM1, we implemented our proprietary ‘Nonacell technology,’ which dramatically increases the amount of light absorption pixels are capable of. Compared to previous Tetracell technology which features a 2×2 array, the 3×3 pixel structure of Nonacell technology allows, for instance, nine 0.8μm pixels to function as one 2.4-μm pixel. This also mitigates the issue raised by low-light settings where light information is often scarce.

In 2019, Samsung was also the first to introduce image sensors based on 0.7μm pixels. The industry had considered 0.8μm as the smallest possible size pixels could be reduced to, but to our engineers, ‘technological limitations’ are just another challenge that motivates their innovation.

Sensors that Go Beyond Our Senses

Most cameras today can only take pictures that are visible to the human eye at wavelengths between 450 and 750 nanometers (nm). Sensors able to detect light wavelengths outside of that range are hard to come by, but their use can benefit a wide range of areas. For example, image sensors equipped for ultraviolet light perception can be used for diagnosing skin cancer by capturing pictures to showcase healthy cells and cancerous cells in different colors. Infrared image sensors can also be harnessed for more efficient quality control in agriculture and other industries. Somewhere in the future, we might even be able to have sensors that can see microbes not visible to the naked eye.

Not only are we developing image sensors, but we are also looking into other types of sensors that can register smells or tastes. Sensors that even go beyond human senses will soon become an integral part of our daily lives, and we are excited by the potential such sensors have to make the invisible visible and help people by going beyond what our own senses are capable of.

Aiming for 600Mp for All

To date, the major applications for image sensors have been in the smartphones field, but this is expected to expand soon into other rapidly-emerging fields such as autonomous vehicles, IoT and drones. Samsung is proud to have been leading the small-pixel, high-resolution sensor trend that will continue through 2020 and beyond, and is prepared to ride the next wave of technological innovation with a comprehensive product portfolio that addresses the diverse needs of device manufacturers. Through relentless innovation, we are determined to open up endless possibilities in pixel technologies that might even deliver image sensors that can capture more detail than the human eye.

Below you see the full list of Canon’s specialised image sensors, and their area of application. The first five image sensors in the list are the new ones (in bold) 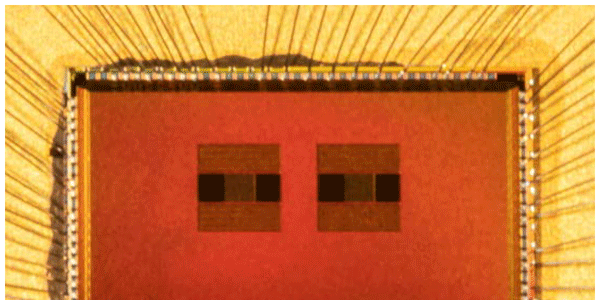 Researchers at the German Institut für Mikroelektronik Stuttgart have developed an image sensor that makes it almost impossible to blow highlights with.

What this image sensor does, is using “self resetting pixels“, i.e. pixels that don’t clip when they get saturated but instead starts over and counts the times it has started over. From the research paper’s abstract:

Conventional CMOS image sensors with a linear transfer characteristic only have a limited dynamic range (DR) of about 60–70 dB. To extend the dynamic range considerably, the already successfully demonstrated concept of a linear self-reset pixel was employed in this work. With the self-reset concept the limit of the maximum analyzable photo generated charge (Qmax) during the exposure time is extended to a multiple of the saturation charge of the photo diode (Qsat) by asynchronous self-resets of the photo diode. Additionally, the remaining charge at the end of the exposure time is evaluated to increase the resolution of the opto-electronic conversion. Thus we achieved pixels with a DR of more than 120 dB combined with an improved low light sensitivity using a pinned photodiode.

In other words: you don’t have to worry about your exposure in order to save highlights in your image. Instead, you can set the best exposure for your subject and safely snap knowing that no highlights will be blown out.

This image sensor is a prototype and likely far from going into production. Never the less, it’s a technological innovation that sooner or later will be featured on image sensors.

Let’s hope it’s something Canon will research too.

Excerpts from the patent literature:

An imaging device such as a digital camera for picking up and recording an image by converting an image signal into an electric signal receives an imaging light flux by means of the image pick up device, which may typically be a CCD (charge coupled device) or a CMOS (complementary metal oxide semiconductor) it comprises. Then, the photoelectric conversion signal output from the image pickup device is converted into image data, which image data is then recorded in a recording medium such as a memory card. In such an imaging device, a cover glass, an optical low pass filter, an infrared absorption filter and other parts are arranged in front (on the subject side) of the image pickup device to form an image pickup unit there.

An apparently legit Canon document describing a full frame image sensor with a resolution of 63MP leaked over the web.

The 35MM63MXSCD named CMOS sensor has Dual Pixel AF, shoots around 5fps, and is made with a 300nm manufacturing process.

The sensor in the leaked document seems at first glance to be the sensor rumored for the high res EOS R model, although the latest rumor we got was talking about a 75MP sensor. We tend to believe this sensor has nothing to do with the upcoming high resolution EOS R camera.

More about Canon’s special purpose sensors can be learned here.

What is you opinion?