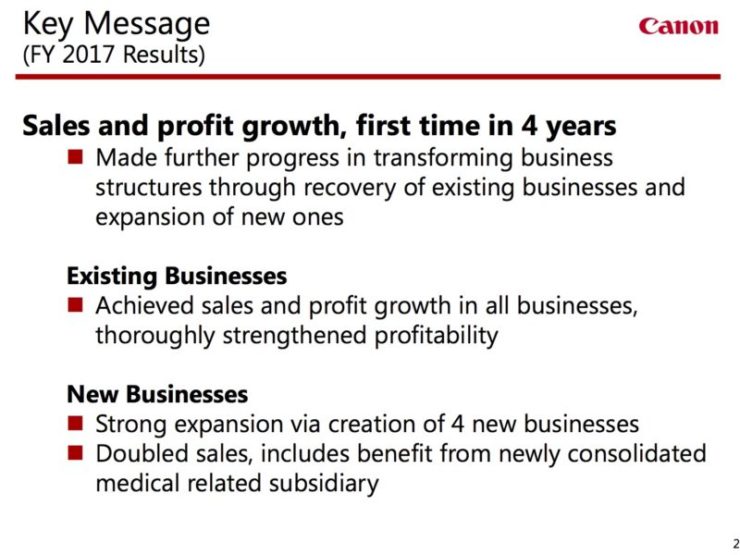 Canon Inc. published the company’s FY 2017 results. No surprise here: Canon is doing good, not least because of their investments in medical and security domains.

Looking back at the global economy in 2017, the U.S. economy continued to grow steadily as employment conditions and corporate earnings improved. In Europe, the economy remained stable as unemployment rates decreased and capital investment increased due to strong exports. The Chinese economy rallied due to public investments while the economies of emerging countries realized moderate recovery as the economies of Russia and Brazil bottomed out owing to the rising price of natural resources. In Japan, corporate earnings improved and consumer spending showed signs of recovery. As a result, the global economy overall continued to recover more robustly than was expected at the beginning of the year.

As for the markets in which Canon operates amid these conditions, demand for office multifunction devices (MFDs) and laser printers remained at around the same level as the previous year. While demand for cameras shrank moderately, demand for inkjet printers increased from the previous year with the economies recovering in emerging countries. Additionally, there was solid demand for medical equipment, mainly outside of Japan. Within the Industry and Others sector, demand for flat panel display (FPD) lithography equipment and manufacturing equipment for organic LED (OLED) panels enjoyed strong growth and the demand for network camera also enjoyed solid growth.

Looking at Canon’s full-year performance by business unit, beginning with the Office Business Unit, unit sales of office MFDs increased from the previous year and achieved higher growth than the market average, supported by steady sales of next-generation color models designed to strengthen the product lineup such as the newly launched color A3 (12”x18”) imageRUNNER ADVANCE C3500 series for small- and medium-size offices. Among high-speed continuous-feed printers, unit sales of the Océ-produced VarioPrint i300, a high-speed sheet-fed color inkjet press that offers superior low-running-cost performance, increased. As for laser printers, sales of both hardware and consumables increased from the previous year, supported by steady sales of new models that achieve low power consumption and compact body designs. These factors resulted in total sales for the business unit of ¥1,865.9 billion, a year-on-year increase of 3.2%, while operating profit totaled ¥180.6 billion, a year-on-year increase of 6.6%. Adjusted operating profit, which excludes impairment losses on goodwill from operating profit, increased by 26.6% to ¥214.6 billion.

Within the Imaging System Business Unit, while the pace of decline in demand for interchangeable-lens digital cameras is gradually decelerating, the sales of the advanced-amateur-models —including the EOS 6D Mark II—enjoyed solid demand, allowing Canon to maintain the top share, mainly in the United States, Europe, and Japan. As for compact-system cameras, the advanced-amateur-model EOS M6 and the entry-level EOS M100 enjoyed strong demand. As for digital compact cameras, amid the shrinking market, unit sales remained at the same level as the previous year, supported by the increased sales of such high-value-added models as the newly launched G9 X Mark II—part of the high-image-quality PowerShot G-series lineup. As for inkjet printers, the newly designed home-use TS-series, refillable ink tank models targeting emerging countries and the imagePROGRAF PRO series of large format inkjet printer targeting the professional photo and graphic art markets enjoyed strong demand, resulting in unit sales increasing from the previous year. As a result, sales for the business unit increased by 3.7% year on year to ¥1,136.2 billion, while operating profit totaled ¥175.9 billion, a year-on-year increase of 21.8%.

Nikon announced a new mirrorless camera in the Z lineup: The Nikon Z 30 with…