The Canon EF 24-70mm f/2.8L II USM (price & specs) has been analyzed by DxOMark. And it scores really really good, they call the lens a «peerless performer». If it wasn’t for the price (it’s $2500), this would be a dream lens, even without IS (my take)! DxOMark writes in the conclusion (emphasis mine):

With an DxOMark score of 26, the Canon EF 24-70mm f/2.8 MkII is the highest scoring professional fixed-aperture mid-range kit zoom of any brand in the DxO Mark database and comfortably outperforms rivals as well as the firm’s earlier Mark I version, particularly with regard to the sharpness levels across the frame. We’re used to seeing a noticeable deterioration in performance in the outer fields at longer focal lengths even with high-quality optics from the big-name marques but the new Canon bucks that trend. As for distortion and vignetting, it manages to hold its own against rivals even if it hasn’t quite managed to improve on those over the outgoing Mk I version.  In spite of the complex optical construction, some chromatic aberration is visible in the corners that may require additional removal in post-production software but levels remain in line with the best of rival offerings. The main downside, however, is the very high price. At $2,500 the lens is far less accessible than the model it replaces, but the reduction in weight and size coupled with the boost in optical performance looks set to satisfy future demands from as yet unannounced high-resolution cameras.

Interesting, and plausible: the EF 24-70mm has been designed with future DSLRs in mind. Please Canon let us know what is in your labs.

Is the Canon C100 the right video tool for you? The review is by Philip Johnston and was featured on nofilmschool. The C100 (B&H | Adorama) is heavily discussed (and criticized) in specialized forums. Too little features compared to the C300 (B&H | Adorama), too high the price, and so on. However, it is a solid tool for video professionals, and a lot of people appreciated it. That’s what Joe Marine over at nofilmschool thinks:

This camera seems to be getting as much vitriol in the comments on this website as the Canon 1D C, but the Canon C100 also has its share of defenders. It might not be priced perfectly considering the features, but it’s a camera that should just work out the box without much fuss, and Canon has made some key changes compared to the C300 that might be a deal-breaker for some, but well worth the cost-savings for others.

Well, I can confirm that the EOS-1D C (B&H | Adorama) gets a lot of hate, mainly because of the crazy price tag. :-) More of Joe’s thought about where the C100 fits best can be read here.

All in all – if this adapter does not send shock waves through the camera industry I don’t know what will (Andrew Reid, EOSHD)

We reported yesterday about a full review of Metabones’ Speed Booster by EOSHD. Now it’s Roger Cicala’s turn to have a take on what is going to be the most intriguing and amazing photographic piece of gear since long. As I wrote yesterday, the Metabones Speed Booster was designed by Brian Caldwell and Wilfried Bittner, both of well known engineering fame. Btw, Caldwell discussed and anticipated the Speed Booster months ago on the dpreview forum, writing:

Designing focal reducers to fit 35mm SLR lenses onto mirrorless Sony NEX and m4/3 cameras is most definitely feasible. The design isn’t easy because there is very little room to work with, but if the magnification is restricted to 0.7x it can work surprisingly well at large apertures. Prepare yourself for optics as fast as f/0.90 by attaching a 0.7x (more accurately, 0.707x) reducer to an f/1.2 (more accurately, f/1.2599) SLR lens. And the reducer actually improves the MTF of the lens its attached to since it de-magnifies the aberrations.

So, we have two skilled engineers who claim to have done something that sounds like magic to most of us, we have a 30 pages white paper with all the technical and scientific galore, enthusiastic first impressions and reviews, and a lot of hype. EOSHD’s review gave us a first glance that the Speed Booster is going to maintain what it promises: faster and wider Canon full-frame lenses on Sony APS-C and Super-35mm E-mounts, and that very particular full-frame look and feel that many videographers want but often cannot afford. Being able to get full-frame aesthetics using a $599 (click here) adapter on a $1000-$1200 Sony NEX-7 or a $800-$100 Sony NEX-6 makes a big difference, at least when compared to a Canon EOS 5D Mark III (price & specs) which comes around $2900 for the body only. Full-frame look on APS-C sensor gear! If that is not going to scare someone in the executive floors of some well known Japanese camera manufacturers, what will then?

Roger Cicala is known for his humor and a pretty sceptical and thoroughgoing approach when testing gear. He got a Speed Booster, and here comes his take. First, a short yet understandable description about how Metabones’s wondertoy works:

A teleconverter spreads out the light leaving the lens so that only the center portion reaches the sensor. The result is the focal length of the lens seems longer (the image is magnified), but at the cost of reducing the amount of light (effective aperture) of the lens. The Speed Booster compresses the light leaving the lens onto a smaller image circle. This makes the focal length seem shorter and actually increases the amount of light reaching the sensor.

The EF to NEX Speed Booster, for example, changes the effective focal length x 0.71, and increases the maximum aperture by 1 stop. A Canon 50mm f/1.2 lens effectively becomes a 35.5mm f/0.9 NEX lens, for example. Videographers all over the internet were singing Hosannah and laying palm leaves along the path of it’s introduction.

Roger did his tests using Canon EF 135mm f/2.0L USM (price & specs) and EF 50mm f/1.2L(price & specs) lenses on a Sony NEX-7. I really want you to jump over to lensrentals and read the test report on your own, it is full of insights and well explained technical stuff. However, I can’t avoid to quote Roger’s conclusion:

I think it was pretty obvious that I came armed for battle, ready to slam this product as some marketing overhype. I was less correct than I might have been. The Speed Booster does what they claimed it would do, much to my shock and surprise. It creates a wider-angle, greater aperture lens while retaining resolution and acutance.

It does increase astigmatism a bit […] It also seems to create some highlight blooming at very wide apertures. […]

Most of the little foibles I’ve seen […] really only apply to photographers trying to tweek every drop of resolution out of their high-resolution sensor. Video, even 5k video, is more forgiving of a slightly weak corner or a bit of astigmatism.

EOSHD’s Andrew Reid had a closer look on the most amazing photographic product since long: Metabones’ Speed Boost adapter (previously featured here). This little toy allows to mount Canon full-frame objectives on a Sony mirrorless APS-C and Super-35mm E-mount cameras. In March this will be possible also for Micro Four Thirds gear. And making lenses wider is not all the adapter can do: It makes lenses also faster. An f/2.8 becomes f/2, f/2 becomes f/1.4, and f/1.4 becomes f/0.90. This is a lot of magic to deliver by a small adapter.

The optical part of Metabones’ Speed Booster was designed by Brian Caldwell and Wilfried Bittner, both well known for their engineering skills. The best thing about this adapter: it is relatively cheap! It comes for $599 (click here) if you need the Canon EOS mount adpater, $399 (click here) for all others. That’s a bargain if you consider what you get for your bucks: the full-frame look on a Sony NEX-7 (price & specs), Sony NEX-5N (price & specs) or a Sony FS100 (price & specs). In any case much less than what you have to give for a full-frame Canon EOS 5D Mark III (price & specs). Andrew Reid writes:

The real world performance when you shoot with the Speed Booster and see the result is far better than any lab test of corner resolution would imply. The claims of this adapter defy belief… Scepticism well founded. And yet…

The post is definitely worth to be read if you want to understand all the advantages of the Speed Booster. Let me just quote a last sentence from Reid’s post:

All in all – if this adapter does not send shock waves through the camera industry I don’t know what will. 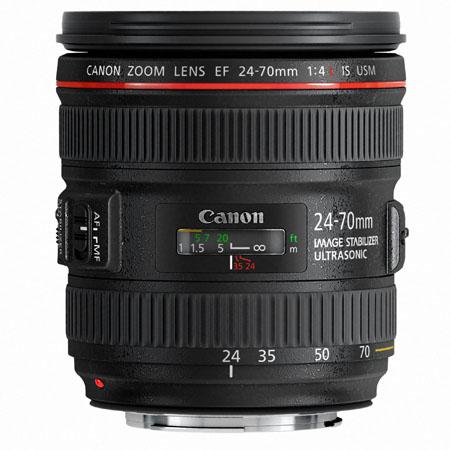 The Canon EF 24-70mm f/4L IS USM (price & specs) is the standard choice for many pros using Canon full-frame cameras. The lens has image stabilization, macro features and an ultrasonic motor for AF. Although it has a price tag of $1499 it is still cheaper than the heavy discussed Canon EF 24-70mm f/2.8L II USM (price & specs), which comes at $2199. If you can live without the f/2.8 (but there is Canon’s excellent IS instead) this lens may be the right glass on your full-frame DSLR (like the entry level Canon EOS 6D (price & specs), the cam used to test the 24-70 f/4).

Photography Blog reviewed the 24-70 f/4 posting an exhaustive review (check the various sections about the lens’ sharpness, samples images here). In the conclusion they write (emphasis mine):

Given its L-series billing, the Canon EF 24-70mm f/4L IS USM build quality is reassuringly excellent and it makes a perfect partner to a full-frame Canon DSLR like the EOS6D that we tested it with. Auto-focusing is quiet and quick, with the ability to manually override it and focus manually if required proving a nice touch. The capable image stabilisation system used in conjunction with a high-ISO monster like the 6D is a low-light shooter’s dream ticket, making it easy to hand-hold the camera and get the shot, despite the relatively slow maximum aperture of f/4. 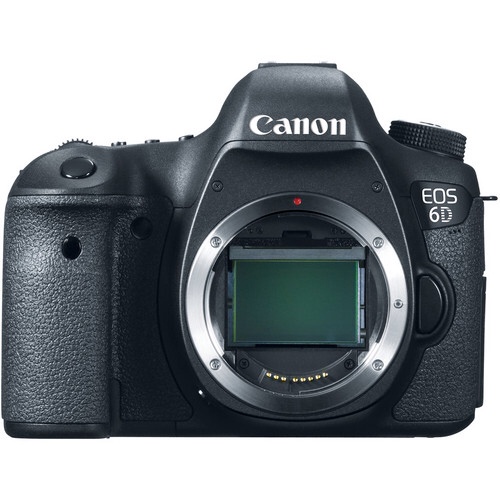 We’ve added our noise, dynamic range, resolution and test scene shots to the preview, including analysis. We’ve also gone back and re-worked the introduction and expanded on our first impressions of the camera.

Click here to go to DPreview’s test and analysis section