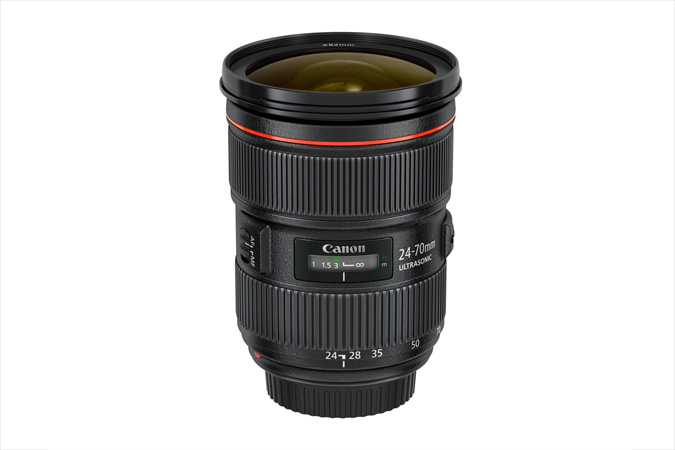 According to Japanese site dcwatch (translated) the EF 24-70mm f/2.8L USM II (click here for specs) lens will be released to the general public on September 6th, that’s in three days!! Price will be around $2300.

Lens initially announced on February 7, had been scheduled for release in April. Had postponed the launch in early July and then, I had been postponed again in mid-September the launch as “it takes time to make final adjustments to achieve the target performance high” on July 5. This time, Release date has been confirmed.

To pre-order check the following shops: Adorama (click here) and B&H (click here). If you live somewhere in Asia, DigitalRev could be the right choice for you, they have the lens available for pre-order too (click here, price depends by your location).

CR broke the news a few minutes ago:

Another feature mentioned about the camera is better heat dissipation of the sensor compared to other EOS cameras. Apparently, this results in industry leading low ISO performance.

Here at CW we got a similar rumor (thank you), and we are also taking it with a grain of salt. The rumor overlaps with the reported specs and adds some details about the shaping of the camera body. I quote the source (emphasis mine):

Its a new type of body, looks like a mini 1DX, it has a integrated portrait grip but its a bit thinner and significantly shorter and also lighter (no rear lcd panel)

I like the “looks like a mini1DX” part. :-) I also got some details about the heath issue. To achieve an outstanding low ISO image quality the sensor is said to get much less hot than sensors on other Canon DSLRs. Seconding the source is has to do with the

amplification signal value that [has] changed in this camera

Image quality at ISO 50 is said to be the cleanest, sharpest and smoothest [ever seen]. On the other hand, IQ at ISO 1600 seems to be not so exciting. And yes, the rumored camera should show up at Photokina.

If this rumor is true, then Canon would fit the EOS 3DX between the EOS-1D X (in stock here) and the EOS 5D Mark III. However, be aware that Canon 3D rumors are coming and going since some years. And the price? No hints. Not sure if it would cost less than the EOS-1D X. Photokina is close and we soon will know. The other possible big thing at Photokina could be a more pro-oriented mirrorless camera. With the EOS M Canon has shown that it can do it, that it has the needed technology and the know how.

Two rumors surfaced during the last weekend. First one comes from CR and is about a >40MP DSLR. The interesting thing: the sources states that two prototypes of this high res cam were tested during the London Olympics. The camera housing is said to be that of the EOS-1D X. The camera should have a high framerate, despite its high res sensor, 8 fps have been mentioned. Finally, there are more, unspecified “new features and technology” that are tested with the prototypes.

Second one comes from NL. This rumor basically overlaps with another rumor CanonWatch was first to report. An EOS 7D Mark II could be around the corner, and may get announced later this year (Photokina?). This DSLR will be the new APS-C flagship in Canon’s line-up. The rumored specs:

I got this rumor in the past, with slightly different naming. My source named a 70D to be the new APS-C flagship and a 7D Mk II as the entry level full-frame DSLR we all think Canon is working on. As I wrote before, I do not think that Canon’s entry level FF DSLR will be named 7D Mk2, but 6D. Last point: The EOS 7D has just seen a massive firmware update, isn’t that somewhat strange if Canon plans to release the second iteration of its popular APS-C flagship? On the other hand, the 7D was released three years ago, and hence due for an update.

A quick update about Canon’s entry level full-frame DSLR. The rumor comes from NL. They report about a 22MP camera that could be named EOS 6D. I reported similar rumors time ago, but my sources named this cam EOS 7D Mark II. Nevertheless, I think “EOS 6D” has more possibilities to be the real name. It makes more sense, imo, especially if you consider the fact that the EOS 7D is Canon’s APS-C flagship, and that the EOS 5D Mark III is Canon’s full-frame flagship. An entry level FF DSLR would be positioned between the 5D Mk3 and the 7D. Hence, “EOS 6D” makes perfectly sense. However, it could also be that an EOS 70D will succeed to the actual 7D (bringing the glorious xxD line back to semi-pro levels) and that an EOS 7D Mark II could indeed be the entry level FF camera. Speculations, I know.

There is another thing: NL’s source(s) say that this entry level full-frame DSLR will not be announced during Photokina in September, but later in October.

CR published images of two upcoming Canon P&S superzoom cameras, the 16x PowerShot SX160 IS and the 30x PowerShot SX500 IS. According to CR both cams will soon be released to the public.