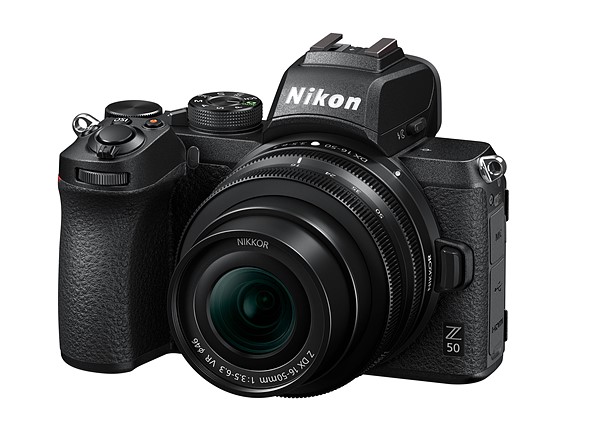 Nikon announced an APS-C mirrorless camera in the Z lineup, the Nikon Z 50. Along with the Nikon Z 50, the Nikkor Z 58mm f/0,95 S Noct lens was also announced (see below in press text). The Nikon Z 50 will ship starting in November 2019 at $860 for the body only, preorder at B&H Photo and Adorama.

Details regarding the NIKKOR Z DX lenses can be found in the following press release, issued today:

The Z 50 is Nikon’s first DX-format mirrorless camera. It inherits its design and operability, reliability, and future possibilities as a mirrorless system from the Nikon Z 7 and Nikon Z 6, further improving on those characteristics and condensing them into a compact, lightweight, and durable body capable of superior rendering capabilities and rich power of expression. It is equipped with the Z mount, which is compatible with both the NIKKOR Z DX and NIKKOR Z FX, ensuring support for all NIKKOR Z lenses and allowing users to enjoy great variety in imaging expression.

The Z 50 has an effective pixel count of 20.9 megapixels, and is the first Nikon DX-format camera to be equipped with a CMOS sensor that incorporates focal-plane phase-detection AF pixels. Adoption of this image sensor, along with the EXPEED 6 image-processing engine, has made a broad range of standard ISO sensitivities — ISO 100-51200*1 — possible for superior image quality with very little noise throughout that range. The camera is also equipped with features such as mid-range sharpening and Creative Picture Control, enabling support for creative imaging expression equivalent to that offered by the Z 7 and Z 6. When NIKKOR Z lenses are used, the Z 50 demonstrates superior resolution and rendering capabilities with both recording of still images, and videos.

It has a 3.2-inch, approximately 1040k-dot tilting TFT touch-sensitive LCD monitor that supports touch operation that smartphone users will find familiar. The tilting monitor has a wide range of movement that enables recording of still images and videos from a variety of angles, and also supports selfies. The Z 50 also supports recording of 4K UHD movies without any crop. Further, the SnapBridge app can be used to transfer photos and videos recorded with the camera to a smart device*2, allowing users to easily share them with others via social media.

The Z 50 is a compact and lightweight, high-performance mirrorless camera that combines the rich power of expression afforded by still images and videos exhibiting superior image and picture quality with simple and intuitive operation. It empowers users looking to express their own individuality through high-quality images. Releasing the Z 50 for a wide variety of users, including those advancing from smartphone photography, will help Nikon to expand its foothold in the Z mount system mirrorless camera market.