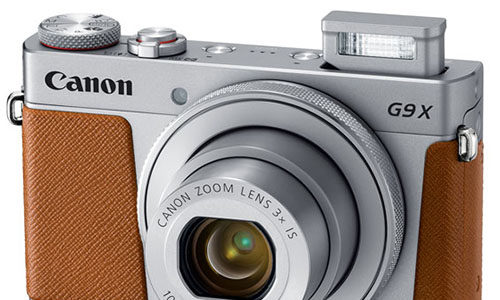 The PowerShot G9 X Mark II sells for $429, so expect a similar price tag for the replacement.

Stay tuned for the next Canon rumour. Previous rumors are listed here.

The Canon Store has a promotion on the Canon PowerShot G9 X.

DPReview posted their full review of the ultra-compact Canon PowerShot G9 X Mark II. While they found a lot of good, some things did disappoint the reviewer.

From their conclusion (emphasis mine):

The PowerShot G9 X II is very appealing: it’s as small a traditionally styled camera with a 1″ sensor as you’ll find and its touch interface makes it easy to pick up and use. It has a broad feature set, generally responsive performance and shooting modes for both beginners and more advanced users.

[…] the G9 X II is let down by its lens, JPEG processing and battery life that requires buying at least one spare. If you’re set on a Canon, moving up to the PowerShot G7 X II is a smart idea, assuming that you have an extra $200 available. The Sony RX100 and RX100 II are also worth consideration, though we think that Canon offers a better user experience. Read the review…

It’s not all bad, the sensor produces “vivid, pleasing color” and there is “fast burst shooting with large buffer”. DPReview’s sample photos are here.

The Canon Powershot G9 X Mark II is compact and stylish, and one of the smallest cameras available that delivers high image quality, thanks to the use of a 1inch BSI CMOS sensor. Having to use the 3inch touch-screen to change controls may not be to everyone’s liking, but if you’re looking for something compact that can deliver great image quality, then it’s worth the compromise. The use of a 3x optical zoom lens helps keep the camera small, whilst providing a wide-angle equivalent to 28mm. For those that want more zoom, or wider lens, then you would need to look at the larger G7 X Mark II.

The PowerShot G9 X Mark II is a little powerhouse that gets a lot of positive reviews. Definitely an interesting compact camera.