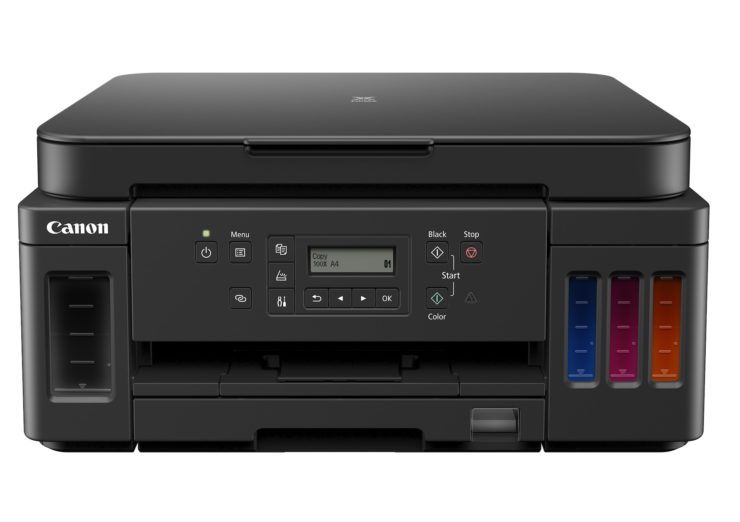 The new PIXMA G-series printers are available today, with the PIXMA G6020 All-In-One Printer available for $299.99 and the PIXMA G5020 MegaTank Single Function Printer for $249.99.

Providing Wireless1 Connectivity, Now is the Time to Upgrade Your Printer to a Continuous Ink Supply System

MELVILLE, NY, June 6, 2019 – In a time where it seems like digital is king, we cannot forget that 69% of Americans feel overwhelmed about the constant barrage of digital information2. It’s time to bring it back to basics and embrace the benefits of print. In that spirit, Canon U.S.A., Inc., a leader in digital imaging solutions, is excited to announce the new PIXMA G6020 All-In-One Printer and the PIXMA G5020 MegaTank Single-Function Printer. These new PIXMA G-series MegaTank printers are further extending the current lineup and are ideal for high-print volume printing with low maintenance.

The magic of PIXMA G-series MegaTank printers lies with the continuous ink supply system. Boasting ink bottles with spill-resistant tops, the printer system is designed to provide seamless and clean usability at home and in the office. With black ink providing up to 6,000 pages3 per bottle and total color ink combination providing up to 7,700 pages3, the printers provide a high-page yield, making them cost-effective and convenient for the consumer. Further adding to the flexibility and convenience of the two new MegaTank models is automatic two-sided printing along with a 350 page paper capacity when using both the front and rear trays. In addition, these two new printers feature faster print speeds than the previous generation of MegaTank printers, producing 13 impressions per minute (“IPM”) for black and white4 and 6.8 IPM for color4.

“Listening to our customer’s printing needs is a top priority for our company as we continue to bring new innovations to our products and the marketplace, ” said Kazuto Ogawa, president and chief operating officer, Canon U.S.A., Inc. “I am confident that today’s product introductions will deliver upon the needs for a continuous ink system and easier wireless technology.”

The PIXMA G6020 and PIXMA G5020 printers both feature wireless connectivity via Wi-Fi®1 and, for users of compatible mobile devices, the added benefit of access to the Canon PRINT Inkjet/SELPHY app5, allowing for easy setup and basic operations on compatible smartphone devices. Through the Canon PRINT app, users can easily access PIXMA Cloud Link6 to print photos and documents from popular online social platforms and services, such as Instagram®, Facebook®, Twitter®, Flickr®, Photobucket®, Dropbox®, Evernote®, Google Drive™ and Microsoft® OneDrive®.

The new PIXMA G-series printers are available today, with the PIXMA G6020 All-In-One Printer available for $299.999and the PIXMA G5020 MegaTank Single Function Printer for $249.999. For more information and a detailed listing of all product features, please visit: shop.usa.canon.com/gseries.

Canon U.S.A., Inc., is a leading provider of consumer, business-to-business, and industrial digital imaging solutions to the United States and to Latin America and the Caribbean markets. With approximately $36 billion in global revenue, its parent company, Canon Inc. (NYSE:CAJ), ranks third overall in U.S. patents granted in 2018† and was named one of Fortune Magazine’s World’s Most Admired Companies in 2019. Canon U.S.A. is dedicated to its Kyosei philosophy of social and environmental responsibility. To keep apprised of the latest news from Canon U.S.A., sign up for the Company’s RSS news feed by visiting www.usa.canon.com/rss and follow us on Twitter @CanonUSA.

Availability and specifications are subject to change without notice.

1 Wireless printing requires a working network with wireless 802.11 b/g/n capability. Wireless performance may vary based on terrain and distance between the printer and wireless network clients.

2 From an Ipsos survey titled “Canon Print for Action Survey” conducted on behalf of Canon U.S.A., Inc. The survey was conducted online in English; fielding from November 27th – 29th, 2018 with a total sample size of 2,010 adults, ages 18 and older from the continental U.S., Alaska and Hawaii. The results were weighted to match the 2016 U.S. census demographic data (including gender, age, region, race/ethnicity and income) to help ensure the data is representative of the U.S. population. This study has a credibility interval of ±2.5 percentage points for all respondents.

3 Page yield is the estimated value based on Canon individual test method using the ISO/IEC 24712 chart and continuous printing simulation with the replacement ink bottles after initial setup. Page yield of color inks is an average yield of cyan, magenta and yellow inks combined. Page yield varies significantly depending on content printed and other factors. 6,000 (black) and 7,700 (color) printed page yields are approximate, based off document pages printed.

4 IPM print speeds are based on the highest speed printer driver mode using black and white and color text patterns. Print speed is measured as soon as first page begins to feed into printer and will vary depending on system configuration, interface, software, document complexity, print mode, types of paper used, and page coverage.

5 Available for free on the App StoreSM and at Google PlayTM.  Requires an internet connection and an iPad® or iPhone® mobile device running iOS® 10 or later or an AndroidTM mobile phone or tablet running Android 5.1 or later.  Tablet operation is not guaranteed.

6 Requires an Internet connection and the Canon PRINT Inkjet/SELPHY app, available for free on the App Store and at Google Play. Compatible with Apple devices running iOS 7.0 or later, and Android mobile devices running Android 4.0 or later. Your device must be connected to the same working network with wireless 802.11 b/g/n capability as your printer.

9 Price is subject to change without notice. Actual price is set by individual dealers and may vary.