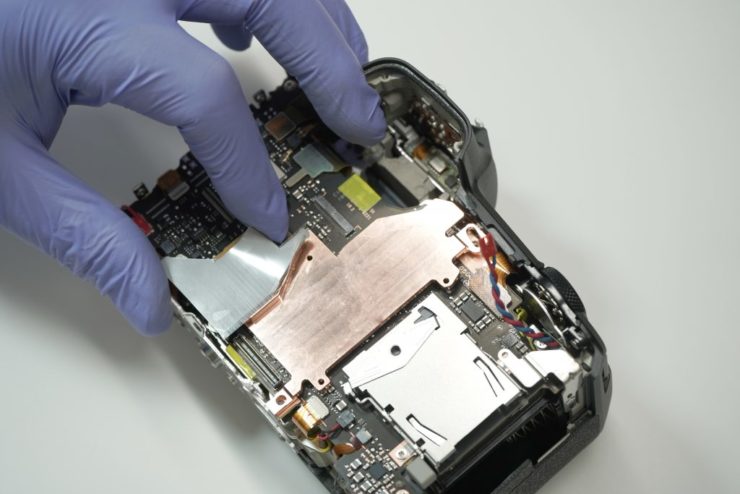 It had to come sooner or later, now here it is. The first commercial Canon EOS R5 cooling modification.

Kolari Vision known for filters and camera mods, announced their Canon EOS R5 cooling mod. Kolari claims that their mod doubles 8K video recording times and cuts recovery time by 66% at normal environment temperatures. Sounds impressing. Have a look at the table below. Kolari claims that with an environment temperature of 15°C (59 Fahrenheit) you’ll no longer get a time limit when recording 8K. At 20°C (69 Fahrenheit) you get 44 minutes and 25 minutes after recovery. Not bad, eh? However, as PetaPixel underlines, the mod will likely void your warranty.

When the R5 was released, we also learned that it overheats quickly in 8K shooting and in some 4K modes. Initially this was handled through a timer chip in the camera independent of actual temperature.  After public backlash, Canon quickly released a new firmware that patched the timer issue and started actually using the camera temperature data instead, but even with this upgrade the performance boost was minor, for example at 20C instead of overheating after around 19 minutes, the new firmware allowed you to shoot around 25 minutes, and the recovery after overheating.

In several thermal analyses of the camera, the processor on the motherboard seemed to generate most of the heat. In the stock design, Canon places two thermal pads partially over the processor and pumps the heat into a small heatsink. That heatsink however sits under another board and does not vent heat anywhere further.

To remedy this problem, we took an R5 apart and designed a new heatsink to vent the heat from the processor to the camera case where it could dissipate faster. We tested aluminum initially, but eventually settled on a thick copper heatsink to transfer heat more efficiently.

This design draws heat out of the processor and brings it around the motherboard and out to the rear case where it transfers heat through a high efficiency thermal pad. This design is fully internal to the camera and maintains the weather sealing of the camera.

We tested the modified camera at 8K-D IPB 30FPS at 59F (15C) and 69F (20C). At 15C, the R5 never overheated in our hands. At 20C, where the stock camera last around 25 minutes, after our mod the camera lasts 44 minutes, almost two times the initial shooting duration. What’s even more important, is that the camera recovered a lot faster after it did overheat, giving more shooting time after a short recovery. With the stock camera, we could only get about 8 minutes of additional shooting after a 5 minute recovery, where the mod was able to shoot 25 minutes after the same 5 minute recovery, a 3 times faster overheating recovery.

Head over to Kolari Vision for the whole story…

Kolari offers a modification service for your Canon EOS R5 at the price of $400. You can also buy an already modified EOS R5 at $4,440. Instructions for DIY aficionados will follow later this year.

More Canon EOS R5 review stuff is listed here (many reviews), for EOS R6 review stuff see here. The EOS R5 is highly regarded as a stills camera. In particular, the EOS R5 autofocus system seems to be huge leap forwards. The official Canon EOS R5 user guide and manual are available for download: EOS R5, and for the EOS R6 too.