TOKYO, May 20, 2015—Canon Inc. and Canon Marketing Japan Inc. announced today that the Company’s EOS 7D Mark II digital SLR camera (launched in October 2014) has been honored with two prestigious Camera Grand Prix (GP) Japan 2015 awards—“Camera of the Year” and “Readers Award”—while the EF 11-24mm f/4L USM ultra-wide-angle interchangeable zoom lens (launched in February 2015) was selected for the “Lens of the Year” award. The Camera Grand Prix (GP) Japan awards, considered one of the most sought-after camera and lens product awards in Japan, are organized by the Camera Journal Press Club (CJPC),1 comprising journalists from major photography and camera magazines in Japan. This year marks the award’s 32nd time to be held.

The Camera GP Japan 2015 Camera of the Year title was presented to the most outstanding camera2 from among the 111 models launched in Japan between March 1, 2014, and March 31, 2015. As further indication of the EOS 7D Mark II’s overwhelming popularity, the camera was also honored with the Camera GP Japan 2015 Readers Award, based on an online vote by general users. In addition, the EF11-24mm f/4L USM took home the Lens of the Year award, resulting in Canon taking home three out of the four Camera GP Japan awards presented this year.

The EF11-24mm f/4L USM, in addition to boasting an impressive minimum focal length of 11 mm to achieve the world’s widest angle of view,3 minimizes the occurrence of chromatic aberrations and achieves superior image-quality performance from edge to edge.

Selected for the prestigious Camera of the Year award, the EOS 7D Mark II was lauded for its fast continuous shooting speed of 10 fps, 65-point all cross-type AF system, and other advanced features that, according to the committee, befit a flagship-level digital SLR camera. The camera was also recognized for bringing these high-level features together into an easy-to-use design, enabling users to effortlessly capture not only moving subjects, but any type of subject. Furthermore, the jury members highlighted the camera’s “revolutionary” anti-flicker function, which ensures optimal exposure when shooting in environments lit by fluorescent or mercury-vapor lighting. The EOS 7D Mark II was said to be the only digital SLR camera equipped with an APS-C-size sensor that made its presence felt and, thanks to its telephoto effect, continuous shooting speed and other features, once again brings new value to the APS-C-size sensor format.

In addition, the committee noted that Canon’s promotional efforts in Japan were successful in generating buzz for the camera, lauding the Company’s marketing materials, which included seven catalogues that each focused on a different photography genre, as appealing and easy to understand.

Winner of the 2015 Lens of the Year award, the EF11-24mm f/4L USM ultra-wide-angle zoom lens was recognized by the committee for achieving the world’s widest angle of view starting at a minimum focal length of 11 mm, without any of the image distortion unique to fisheye lenses. The committee also noted that, thanks to the generous use of cutting-edge optical technologies and lens-coating technologies, the EF11-24mm f/4L USM effectively corrects for aberrations commonly associated with ultra-wide-angle lenses, delivering a level of image quality capable of supporting use even with cameras with high pixel counts. Concluding, the committee said that the lens offers specifications and a perspective that are “truly unique.” 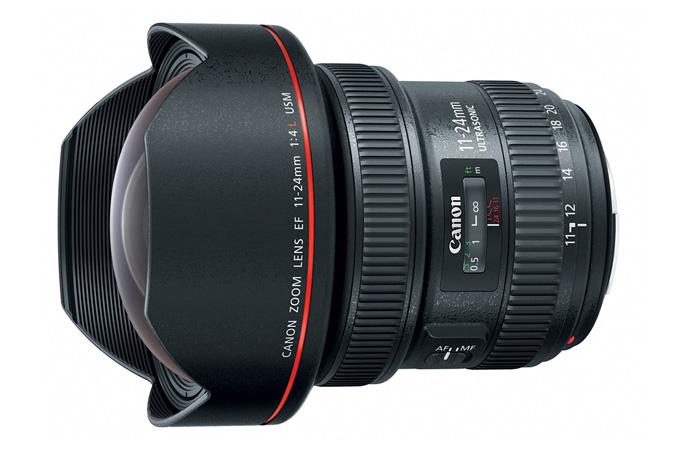 There have been only positive reviews about this $3,000, professional lens. The EF 11-24mm f/4L is now available at Amazon US | Adorama | DigitalRev

After a new set of 76 samples, Photography Blog posted their full review of the amazing Canon EF 11-24mm f/4L lens, the world’s widest rectilinear zoom. In the conclusion they write:

Image quality is outstanding. Chromatic aberrations are very well controlled, bokeh is pretty impressive despite the slow f/4 aperture and the wide-angle nature of the lens, and the Super Spectra coatings successfully prevent contrast loss attributable to flare. The only real optical issues are obvious vignetting throughout the zoom range (but particularly at 11mm), predictably obvious barrel distortion at the 11mm wide-angle focal length, and a slight lack of both centre and edge sharpness when shooting wide-open at f/4 at the 24mm focal length.

There have been only positive reviews about this $3,000, professional lens. The EF 11-24mm f/4L is now available at Amazon US | Adorama | DigitalRev

Canon Watch reader Sébastien was in Hong Kong and didn’t miss the chance to get the brand new Canon EF 11-24mm f/4L . He wrote me, saying:

The lens did great. At first I was really impressed by the size and the weight. Without camera it doesn’t look well balanced. When on the camera it is just fine. The angle is crazy! I’m used to the 16-35mm f/2.8, this is something else.

I want to share this first impression and say that even if the lens has a certain cost, It’s totally worth it. It opens new horizon for work and creativity.

He posted a set of sample pics on 500px, all shot with an EOS 5D Mark III. Thanks Sébastien for sharing your impression with us.