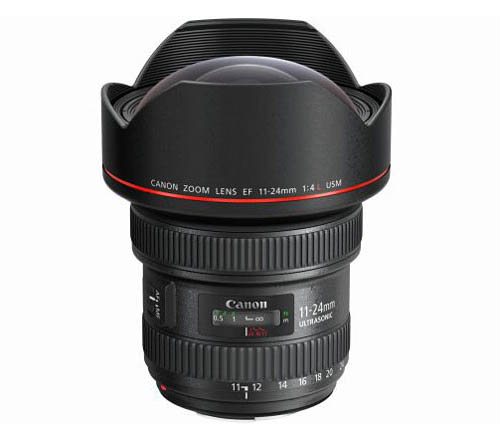 The image of the 11-24mm that leaked some time ago.

I have been told by a good source (thanks) that Canon will soon announce the EF 11-24mm f/4L lens. The announcement may be a matter of a week or two. Price is said to be around $3,000.

An image of the new ultra-wide angle zoom lens showed up time ago. All agree that the image (above) is not a fake. Moreover, there is also a patent for such a lens.

Update (thanks Paul): Canon Germany’s site has leaked the 11-24mm lens, though the link does lead to a “page not found”. In the image below you see a screenshot of the page. The 11-24mm is mentioned where the image is missing. The text says: 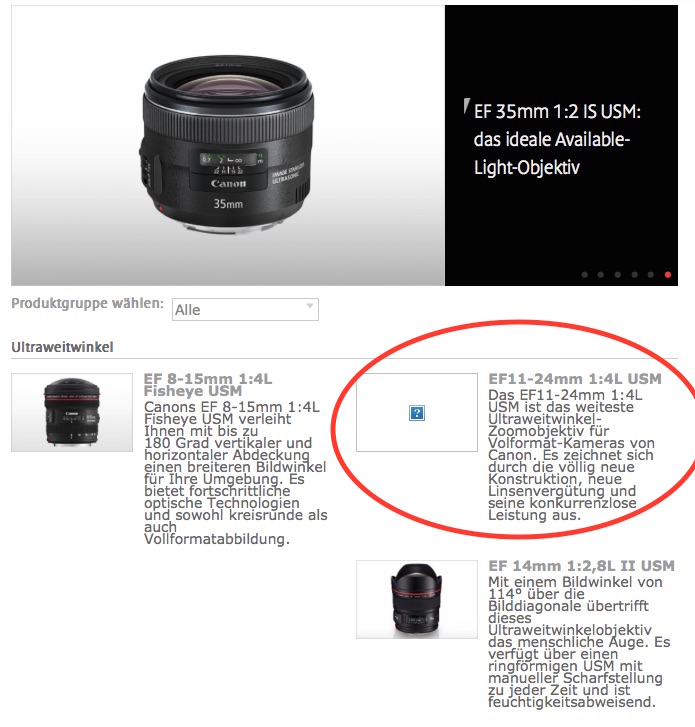 More or less 2 weeks ago the image above showed up on kakaku.com, disappeared shortly after, and was spotted and shared by digicame-info.

It appears, at least I have been told so, that the lens is real and should soon be announced. This comes from a source that was _not_ always right in the past, so take it with a grain of salt. However, a lot points to the fact that we have a serious rumor here. First and foremost, the pic looks truly authentic and not photoshopped. Second, there is a patent for a 11-24mm f/4 lens that surfaced some time ago (January 2014). Third, I have this source insisting that it will be announced soon :-) In one word: the picture of the lens appears to have been a real leak, for whatever reason.

To some degree all this copes well with a long running rumor suggesting that Canon may eventually announce an eagerly awaited (and much rumored) high resolution DSLR. Recently, even Canon itself mentioned the development of a high resolution sensor in an interview with Mr. Masaya Maeda, Managing Director and Chief Executive, Image Communication Products Operations at Canon. The EF 11-24mm f/4L could be announced together with this high res camera. While I still have some doubts about the high res camera, I think the 11-24mm has a very good chance to be real.

Stay tuned. Your comments and thoughts are welcome, let me know in the comment section.

This image was posted on kakaku.com (and spotted by digicame-info) and shortly after it was removed. There was a patent for a 11-24mm f/4 lens that surfaced time ago.

Hard to say if the image is a fake or not. To me it looks authentic. Is Canon preparing one more announcement? Not for Photokina 2014, since it started today.