Some excerpts from the conclusion:

[…] the EOS 6D Mark II is a classic Canon DSLR. Is it particularly exciting? No, but really, neither was the original 6D aside from its fairly accessible price point. What the 6D Mark II is, though, is a solid, well-built camera that is capable of producing great images while improving upon its predecessor in almost every measurable way.

[…] the 6D II excels at high ISO values. Once you get past ISO 1600, the 6D II handily pulls away from its crop-sensor cousins and is broadly competitive with market peers.

Comparison with other cameras:

For the same price, Nikon’s D750 offers nearly the same resolution, loads more dynamic range and a far more sophisticated autofocus system. Same goes for the Sony a7 II, though that camera is even cheaper. The Pentax K-1 is an incredible value and gives you even better build quality, unique and innovative features like Pixel Shift, and far more resolution. The only thing that makes the EOS 6D II stand out is Dual Pixel AF, which turns out is only of real value in this camera when shooting single shots of slow-moving subjects or HD video.

ePHOTOzine posted a set of lab sample photos shot with the new Canon EOS 6D Mark II. Full-size photos can be downloaded, comparison with other DSLRs available, and there are also white-balance sample photos.

Another proof that the Canon EOS 6D Mark II is a total failure, as the many Internet-experts are telling us.

Canon Japan posted a statement where the company tells us that shipment of the EOS 6D Mark II kit with the EF 24-70mm f/4L IS lens is delayed because…too many people wants one and they cannot fullfill all requests as for now.

My my, does all these foolish people know that the EOS 6D Mark II lacks 4K video and has a limited dynamic range? Or do they just give a s*** about all those self-proclaimed, Canon-bashing experts and the crap they write on the web?

Below: screenshot of the machine-translated statement by Canon Japan: 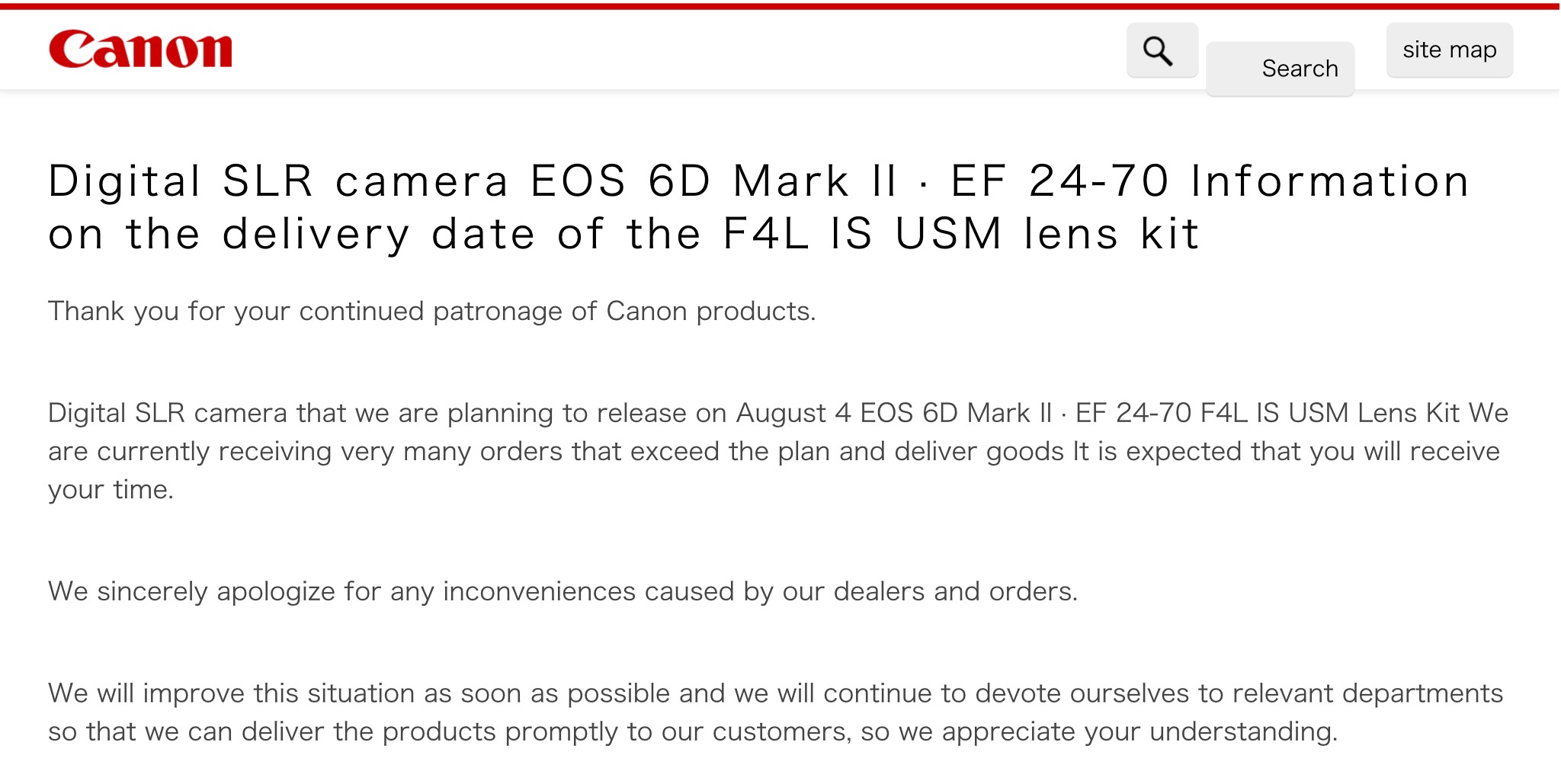 The usually not very Canon-friendly (but always fair)  folks at Camera Store TV took the new Canon EOS 6D Mark II and put it under test.

Chris Niccolls and Jordan Drake compare the EOS 6D Mark II with the original EOS 6D, discuss its features, and obviously wont forget the sensor and all the futile discussions about dynamic range, not to mention the pointless polemics about the lack of 4K video.

Edit: it has been suggested in the comment section that what is written below was meant for the folks at The Camera Store TV. It’s not. I consider both Chris and Jordan to be fair and professional reviewers.

Various retailers in Europe and some in the US told me that the EOS 6D Mark II will sell like hot cakes, that’s already assested from the sheer amount of pre-orders. How the hell is this possible if the EOS 6D Mark II is that crippled DSLR all the supposed experts on the web are telling us it is?

Be a photographer, not a pixelpeeper.

First authorised Canon retailers started shipping the Canon EOS 6D Mark II. Almost all. There are a lot of backorders that have to be honoured but you can assume that if you order today it will ship soon if not immediately.

Don’t get fooled by the (too) many ridiculous discussions about dynamic range or the lack of 4K. Canon managed again to build a killer DSLR, and it will sell like hot cakes despite the usual haters. All those sites that are blaming supposed shortcomings of the EOS 6D Mark II are doing it only for traffic.

It’s true that the EOS 6D Mark II will never hold up to purely engineering figures like DxOMark. What they are not telling you is that the 6D2 is made for serious photographers, not for nerds or pixelpeepers who are photographers only when sitting in front of their 5K monitors.. Those people is better done with overheating Sony paystations. The EOS 6D Mark II is a well made, affordable and powerful DSLR.

I can’t stand all this idiotic Canon bashing any longer. It’s hysterical at best. Most of those who are posing as sensor and camera experts never had a Canon camera in their hands. At least not seriously, not on travel, not in extreme conditions. I’m back from a harsh adventure in the Indian Himalayas: my EOS M3, EOS 80D and EOS 5D Mark II never missed a hit, not even at 5600m, with rain, dust, moisture. And they never shut down because of overheating. I did not care about my gear and it always worked, flawlessly, ready to go when I needed it. Is this worth something to you? Then get a Canon and forget the bullshit on the web.

Even an entry level DSLR like the Rebel SL2 delivers more reliability than any overpriced Sony crap.

Be a photographer, not a nerd.