Nothing is more satisfying than using a lens like this in real life. Practically speaking, handling is superb- the lens design will not frustrate you when relying on it counts the most. Image stabilization is very effective if you prefer to rely on it. If you don’t mind a constant f/4 aperture like me, you should try one out, but  just be prepared to part with your money. This lens has consistently put a smile on my face, before, during, and after the exposure process.

Rental Camera Gear Destroyed by the Solar Eclipse of 2017 (LensRentals)

Review of the Canon C200 Cinema Camera (The Slanted Lens)

The new Tamron SP 24-70mm F/2.8 Di VC USD G2 is a versatile walk-around lens with a fast maximum aperture that consistently delivers great images. It’s very sharp throughout most of the zoom and aperture range, even at the edges of the frame, with sharpness only falling off a little shooting wide open at f/2.8. The new SP 24-70mm G2 also produces very nice bokeh effects thanks to the 9-blade iris diaphragm, although there’s some very obvious vignetting and some barrel distortion at 24mm, plus slight pincushioning at 70mm. Overall, though, there’s little to complain about in the image quality department.

Yashica teases a new camera on Kickstarter in October

Thanks to its relatively small size and light weight, it would make an ideal companion for photographers who want to have a long telephoto length in their bag, perhaps while travelling, or on shoots that involve a lot of walking.

It’s ideally suited to subjects such as wildlife and sport, but as it has a versatile focal length, you could also use it for other subjects such as portraits and still-life shots, making it a good all-round option that you could potentially get a lot of use out of.

Image sensor authority DxOMark benchmarked the much discussed Canon EOS 6D Mark II. Canon seems to not have hit the mark with the 6D Mark II. There is a lot of discussion about dynamic range and ISO performance.

DxOMark has some good words for the EOS 6D Mark II, though the 6D2 can’t really hold up to competition or to what people was expecting:

Its sensor performance continues the upward trend for Canon chips too, although it doesn’t quite hit the dizzy heights of Canon’s best sensor to date in the 5D Mark IV. This is a result of notably lower dynamic range recorded by the 6D Mark II at base ISO, which is a concern for photographers after the best image quality in good light. From ISO 800, dynamic range is much closer to the performance of semi pro rivals such as the Nikon D750 and Sony A7 II however, and with good color sensitivity at all settings and well-controlled noise the 6D Mark II lends itself better to low light photography. Read the review at DxOMark.

From an engineering, sensor-wise point of view there is measurable data that suggests ISO noise and low light performance are ok, at least.

The positive points of the Canon EOS 6D Mark II include its improved AF system, the fantastic articulating touch-screen and a new processor which facilitates a better high noise performance. However, there are sadly a few downsides too. Having a single SD card slot is disappointing at this price point, while 4K video is starting to become so standard that to see it left out of a £2,000 camera is definitely a let-down (though that’s less of a concern to people not interested in video). A viewfinder which only offers 98% coverage is also something which you usually find in cheaper models.

1 hour and 20 minutes of video tutorial and user guide for the new Canon EOS 6D Mark II by Tony & Chelsea Northrup. This video should definitely cover anything you might want to know about the EOS 6D Mark II.

We have been told (thanks) that Canon will soon release a firmware update for the new Canon EOS 6D Mark II.

I doubt the firmware update will solve the alleged issues concerning limited dynamic range and poor high ISO performance of the Canon EOS 6D Mark II, though I’ve been told that it will. Most likely it will be a bug fix.

I have a hard time figuring out how a firmware update could solve what appears to be limits of the sensor itself, i.e. of the hardware. While it is true that you can correct some thing via software (firmware is software), I guess the limits of the 6D Mark II sensor are here to stay.

It seems Canon did well in disappointing many reviewers and potential customers. The lack of 4K video likely is the most criticized aspect of the EOS 6D Mark II, followed by the supposedly “poor” sensor performance at high ISO settings and a somewhat reduced dynamic range at low ISO.

One thing is sure: the firmware update will not bring 4K video to the EOS 6D Mark II.

Alan Dyer posted an EOS 6D Mark II review on his site of The Amazing Sky, with an eye on the performance for night photography, i.e. “nightscapes” shot with long exposure and high ISO settings. What he found out is pretty disappointing.

According to Dyer’s tests, you are better done with the original EOS 6D when it comes to high ISO settings. Dyer photographed the same scene with both cameras in RAW at ISO 1600, 3200, 6400, 12800, and 25600. He used the same lens and same aperture, and applied no noise reduction. As you can see in the pictures below, results are not exciting (picures shared by PetaPixel on Flickr, where you can dowload the original files). 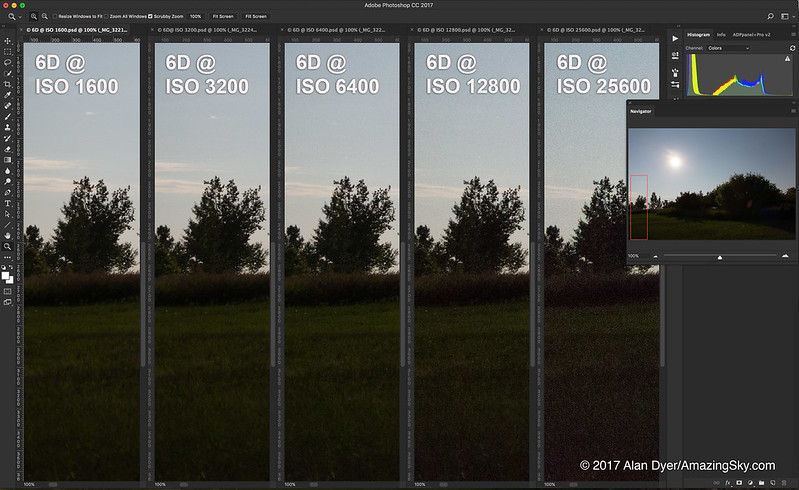 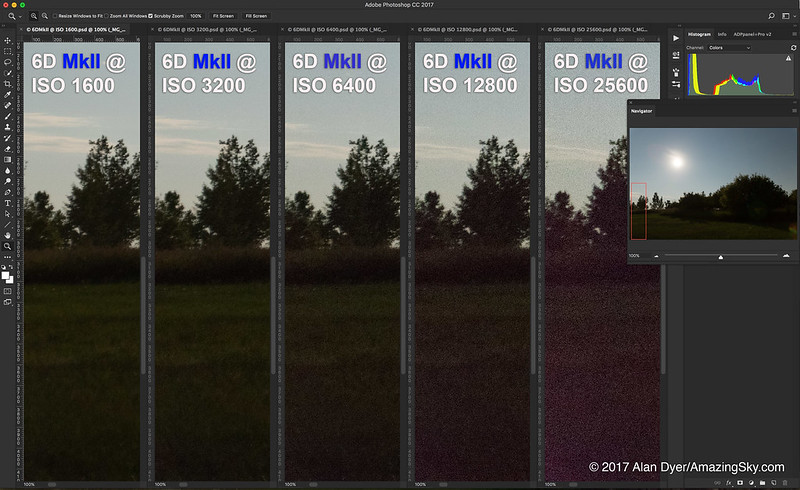 While this is not a scientific tests, the results are never the less worrying. After the debacle caused by the lack of 4K video and a slightly reduced dynamic range (both exaggerated in my opinion), this report will add new passion to the already heated discussion about the EOS 6D Mark II.

Dyer also made some tests on the ISO invariance and the noise reduction, Unfortunately, the EOS 6D Mark II didn’t perform very well here either. Read the full article to learn more.