Some early thoughts about the EOS 5DS R by Ming Thein.

I expect in real terms the difference in pixel size is going to mean a tradeoff between resolution and dynamic range – though it’s too early to conclude for sure. I do believe that the gain in printability – assuming lenses that are of sufficient quality – will be noticeable. I’m also curious about some of the other lenses for the Canon system that have no Nikon equivalents – the 17 TSE, for instance, and the MPE-65.

Travel photographer and Canon Explorer Lucie Debelkova was one of the first to shoot with the high-resolution EOS 5DS R and, as she explains to CPN, she found 50.6 Megapixels brought her much closer to the magic of the north.

With 50MP of resolution on tap, the sensor delivers details and sharpness in truckloads. My Photoshop became the equivalent of Google Earth — keep zooming into the image and you’d discover details you never imagine existed. You see television detectives screaming “enhance!” to get their lab technicians to reveal the vehicle registration number from surveillance footages? That’s exactly how I felt as I kept zooming in to unravel more details from the 5DS images […]

Just as it was the Nikon high resolution cameras were released, it will take months of testing and photographer experience to determine which lenses do exactly what with the new cameras. But it’s not a critical thing to know at first. Every lens will provide better on the new cameras, at least in the center of the image. How much of a difference will range from noticeably better, to “wow” depending upon the lens, type of photography, and subject matter.

Read the article at LensRentals.

Canon EOS 5DS and EOS 5DS R are shipping in the US!

LensRentals’ Roger Cicala posted a teaser (on Facebook) of the ongoing Canon EOS 5DS and EOS 5DS R testing they started. Read what they say:

Roger [Cicala] has been res testing the new Canon 5ds/ 5dsr cameras all afternoon. Here is a teaser graph for the pixel peepers! (The results are impressive)

While we are waiting for the reviews to show up on the Web, have a look at LensRentals’ teaser image. The results are impressive. Kudos Canon!

The Canon EOS 5DS and EOS 5DS R start official shipping tomorrow. However, it’s an open secret that some customers have already got theirs. No name of the shops that are already shipping since it could be that Canon has a sale embargo until June 14. 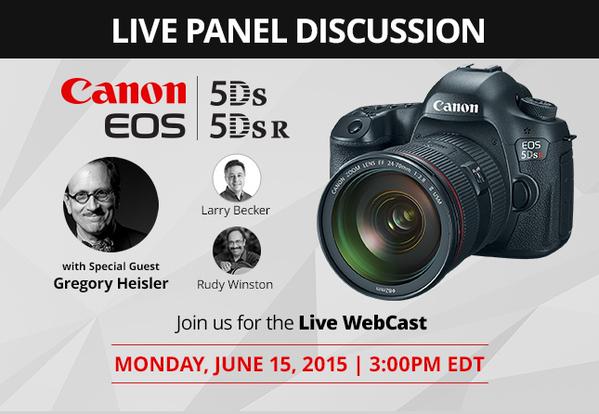 Update: You can now sign up at B&H Photo to get notified by email when the live stream starts.

B&H Photo will stream a live discussion panel for the EOS 5DS and EOS 5DS R on Monday, June 15, at 3PM EST. Photographer Gregory Heisler and Larry Becker and Rudy Winston from Canon USA are there to discuss everything you may want to learn about Canon’s high resolution DSLRs. Save the date!