A video presentation of the Canon G1 X II by Canon Ambassador of Light Ziv Koren was posted on Canon Germany‘s Youtube channel. The video is in English with German subtitles and is named “My city. My Camera”. Enjoy.

There is also the official, 5 minutes first look video presentation (below) of the Powershot G1 X II by CanonAustralia.

The Canon Powershot G1 X II has been officially announced and can be pre-ordered for $799: Amazon | B&H Photo | Adorama. Availability: April 2014.

Amazon and Adorama and B&H Photo have landing pages with pre-order links for all the Canon Powershot cameras announced today.

Amazon and Adorama and B&H Photo have landing pages with pre-order links for all the Canon Powershot cameras announced today. For the Rebel T5/EOS 1200D see here.

The Canon Powershot G1 X II has been officially announced can be pre-ordered for $799: Amazon | B&H Photo | Adorama. Availability: April 2014.

Boasting a sensor that is 4.5x larger than a 1/1.7″ sensor found in professional level point-and-shoot cameras, the PowerShot G1 X Mark II camera can produce high-quality images with a wide dynamic range. It features a new type of 1.5-inch, 12.8 megapixel High-Sensitivity CMOS sensor, made by Canon, allowing for optimum performance with an ISO range of 100-12800. This sensor, combined with the DIGIC 6 Image Processor, comprises the Canon HS SYSTEM resulting in faster autofocusing speeds over the PowerShot G1 X camera, allowing photographers to capture detailed, vivid images even in low-light conditions.

Featuring a newly-developed f/2.0 – f/3.9, 5x optical zoom lens (equivalent 24-120mm zoom range) with Dual Control Rings, this new camera provides customized zooming and focus-functionality similar to a DSLR camera. With this wide of an aperture, photographers have the ability to isolate their subjects by separating them from a background that is blurred. This gives more control and creative possibilities when using a PowerShot camera. The Dual Control Rings include a Step Ring to adjust various customizable settings and a Continuous Ring to make focusing adjustments during manual focus, as well as additional customizable settings for manual shooting. The new lens also features a nine-blade aperture to provide beautiful, blurred backgrounds even at full-zoom range.

The PowerShot G1 X Mark II camera is equipped with a new type of Canon-made, 1.5-inch CMOS sensor to help achieve optimal performance from low to high ISO speeds. It has a default aspect ratio of 3:2 which is the same ratio the advanced user has come to expect when shooting with a DSLR camera. If the photographer wants to switch to a 4:3 ratio, it can be done without impacting the field of view.

The PowerShot G1 X Mark II camera is equipped with built-in Wi-Fi® technology, so users can share still images and videos online quickly and easily using compatible mobile devices.1 Using the Mobile Device Connect button, users can connect to a smartphone, a tablet or a Wi-Fi enabled computer. Connection to the computer is easily done using Canon iMAGE GATEWAY 2 through the cloud. For even easier connectivity, the PowerShot G1 X Mark II camera introduces Near Field Communication (NFC™)** – a first for Canon’s G-series cameras – so transferring photos to a compatible Android™ device can be simple and intuitive. This digital camera’s new remote shooting feature also allows the user to sync the G1 X Mark II with a smartphone or tablet and utilize the shutter, optical zoom and self-timer features from that device.

Unique to Canon PowerShot Digital Cameras, the PowerShot G1 X Mark II camera features Advanced Star Mode with four options to capture images of starry night skies with impeccable quality. The “Star Portrait” and “Star Nightscape” modes help capture the radiance of stars while still allowing you to capture the subject. The “Star Trails” mode captures video trails of stars to turn trails into a luminous still image, while the “Star Time Lapse Movie” mode will shoot images of star movement and then combine the images to make a film that shows the movement of the stars, creating a truly stunning video.

The PowerShot G1 X Mark II digital camera will be available starting in April for a retail price of $799.99.

Full specs and product description after the break.

Through a wide-angle lens for precise zooming and accuracy. The lens features dual control rings for customized functions similar to SLR lenses and a 9-blade aperture for beautiful, blurred backgrounds.

Makes it easy to navigate features and displays images in crisp, bright detail. The tilting design lets you achieve an ideal view of the screen from multiple angles.

Combines with the CMOS sensor to create the Canon HS SYSTEM, which optimizes low-light performance.

Reduces image blur caused by camera shake and vibration. ISO up to 12,800 ensures images are clearly captured, even in dimly lit environments.

Allows you to capture dynamic, fast-motion events at up to 5.2 fps. Face detection isolates subjects in-frame and optimizes conditions, letting you take high-quality pictures of friends and family members.

With auto, on, slow synchro and off modes provides efficient illumination, so you can capture clear, properly lit images.

Improves focusing speed, letting you quickly hone in on subjects from as close as 2″.

Enables the wireless transfer of photos and videos to compatible mobile devices, select social networking sites and Wi-Fi-enabled computers and lets you remotely operate the camera using an enabled cell phone or tablet.

Allows you to pair the camera and your compatible Android device with just 1 touch.

Supports Secure Digital, Secure Digital High Capacity and SDXC memory cards (not included), so you can store plenty of photos and videos.

I am able to post 3 pages of what appears to be the  Japanese product brochure for the Canon Powershot G1 X II, expected to be announced tomorrow along with other gear. The brochure leaked at Kakaku. 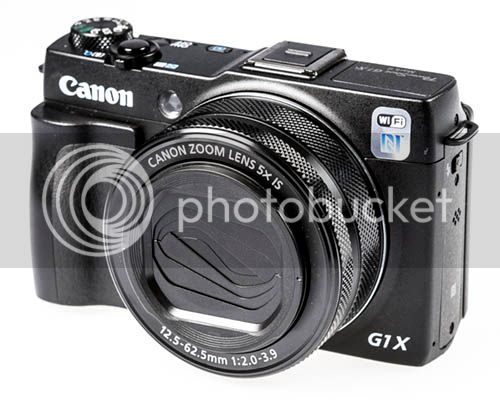 Digicame-info just posted what I am pretty sure are the reals specs of the upcoming EOS Kiss X70 and Powershot G1 X II, both expected to be announced tomorrow together with other Canon gear.

DIGIC6 is welcome, and the other specs also look good. Unfortunately we do not know the fps of the G1 X II but it should be around 5 fps with focus locked.

These appear to be the real ones. Images of the soon-to-be-announced Powershot G1 X II leaked on the web. No new specs. The display is tiltable and the lens should be a 24-120mm equivalent. The G1 X II will be officially announced tomorrow.

So far the rumored specs of the G1 X II are: