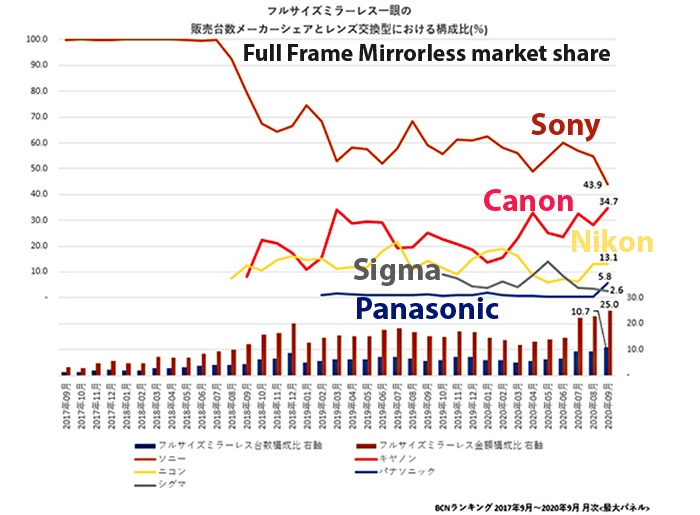 Things are changing in the mirrorless universe. The Canon EOS R5 and EOS R6 are a market hit for Canon, in Japan and around the world. And that despise all the crap that had to be thrown at Canon after launch.

There is more to learn from the BNC Report. You can see that Nikon struggles to grow market shares, that Panasonic is getting better (thanks to the S5), and the Sigma is not selling as much Sigma FPs as they likely wished.

As of April, the decline in mirrorless interchangeable-lens cameras was greater than that of the interchangeable lens type as a whole, and the number of units sold was 19.7% year-on-year, a decrease of more than 80%. However, it recovered rapidly after July. In September, the number of units sold was 97.8% compared to the same month of the previous year, and the amount was 90.3%, approaching the same level as the previous year. In reaction to the last-minute purchase before the tax increase that occurred in September last year, the number of interchangeable lenses as a whole increased temporarily to 52.1% and the amount of money was 56.3%. In such an environment, full-size mirrorless cameras are doing very well.

The positive environment for cameras, such as the Go To Travel Campaign, has been set up, and new full-frame mirrorless interchangeable-lens cameras are being released one after another. Canon will release the EOS RP in April, the R5 in July, and the R6 in August. Nikon released the Z5 in August, and Panasonic released the LUMIX S5 in September. After October, Sony will release the α7C and α7S III, and Nikon will release the Z6II and Z7II. Consumers’ choices are expanding all at once, and the camera market is returning to its bustling atmosphere.

This year, sales of new products introduced by Canon in particular increased, and the share of sales volume was 34.7%. It is just behind Sony, which has fallen to 43.9%. Nikon’s flagship product has not yet been released, and the momentum is the same as before. With the introduction of a low-priced model, Panasonic has finally gained a presence despite its single-digit share of 5.8%. Sigma, which temporarily overtook Nikon, has only one model in its lineup, so it has been overtaken by Panasonic and is content with 2.6%.