So, next murmuring about the upcoming white Canon DSLR (see here too).

No new Rebel before X-Mas, but an X-Mas-white Rebel instead. :-)

Photography Blog reviewed Canon’s full-frame pancake lens, the amazing EF 40mm f/2.8 STM (now just $149), a lens with an excellent value for the money. All other reviews I featured here on Canon Watch confirmed the good optical performance of this relatively “cheap” lens. Cheap, here, means inexpensive and doesn’t mean there are compromises on build or optical quality. Sure, it is not an “L” grade lens, but the little pancake has more to offer than just a low price tag or a great ease of use. The EF 40mm f/2.8 STM has a discount of $50 and is sold for $149 at both Adorama and B&H.

The EF 40mm f/2.8 STM is a fairly unprepossessing little lens, and its tiny size and relatively low price might make you wonder whether significant compromises have been made in its design and construction. But the moment you start shooting with it and looking at the images it produces, any such thoughts rapidly disappear – it’s actually a very fine lens.

So, the optics are good, the AF is quiet and fast, and it has a decent build. Actuall in the US the lens has a $50 discount and is sold for $149. dpreview also posted a sample image gallery. The lens got an overall score of 84% and hence dpreview’s Gold Award.

This new and fast Ibelux 40mm f/0.85 lens was displayed at the CP+ exhibition in Japan. It's made by Kipon and the German company IBE. Among other mount types it will be released for the Canon EOS M (price & specs) around July 2013 (other mounts: E, MFT, M, and X). Price hasn't been announced yet but it is expected to be between 950 and 1200 Euro. For the time being this is the fastest lens ever released for a modern digital mirrorless system. German company IBE (click here) has a long history of high quality video lenses, so there shouldn't be surprises with the optical quality of this lens.

You can save this search on Slidoo to get notified when it will be available on eBay. 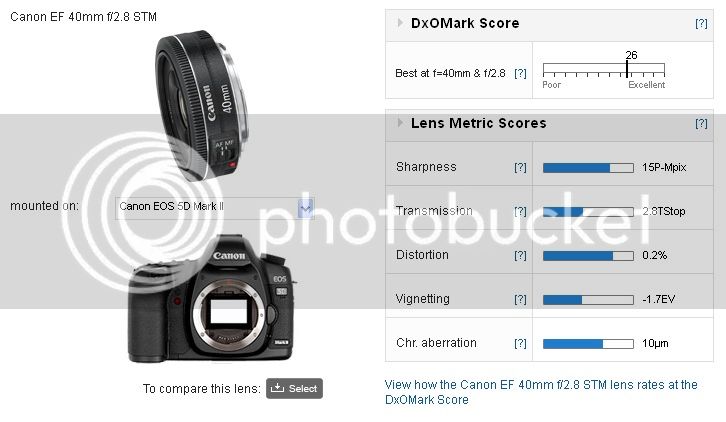 Considering its relatively low price, the EF 40mm f/2.8 STM was a solid performer on our DxOMark Camera Lens Ratings. […] it rates among the top seven standard prime lenses (with a focal range between 35mm and 85mm) achieving an overall DxOMark Score of 26.

Strengths of the Canon EF 40mm f/2.8 STM include resolution […] Additionally, our sharpness measurements and field maps […] indicated that the lens delivered relatively consistent edge-to-edge sharpness from f/2.8 to f/11.

Other strengths include its low geometric distortion and well-controlled chromatic aberration as indicated by its low Chromatic Aberration score of 10µm.

The one weakness of the Canon EF 40mm f/2.8 STM was the strong vignetting evident at the widest apertures. You can see from the vignetting field maps below that at f/2.8, there is heavy shading across 2/3 of the field.

The 40mm pancake performs slightly better than the much pricier Canon EF 50mm f/1.4 USM(price & specs), and the cheaper EF 50mm f/1.8. As you can see, all three lenses have very good sharpness figures.