We got a new rumor and it comes from an unknown source. Not sure how reliable it is. Take it with a big grain of salt for the time being.

We got tipped that Canon might be working on a camera with APS-C sensor capable of 8K video. Nothing was told if this camera is a DSLR or a mirrorless camera. Might this refer to the fabled EOS R camera with APS-C sensor? It doesn’t sound likely it might be a model in the EOS xxD lineup. Does this lineup even have a future? Don’t think 8K will come to any entry-level Canon camera, but I might be wrong.

What is your opinion about this rumorrumor?

8K video seems to become an must-have feature even if few people needs it, and even fewer have the computing resources to edit it. It’s featured on the Sony Alpha 1 and the Canon EOS R5. So, let’s go.

The video’s table of contents:

More Canon EOS R5 review stuff is listed here, for EOS R6 review stuff see here. The EOS R5 is highly regarded as a stills camera. In particular, the EOS R5 autofocus system seems to be huge leap forwards. User manual are available for download for the EOS R5 and the EOS R6.

More information about the Sony Alpha 1 can be found after the break.

The old Canon EOS R5 polemics are getting a heads up from a Canon exec. It’s about 8K video and why it was featured on the EOS R5.

In an interview with Japanese camera website Toyokeizai, Mr. Tsuyoshi Tokura, Canon’s imaging division general manager, said something rather interesting about 8K video on the EOS R5 (emphasis mine).

I don’t think video-focused users are driving the reputation of this new product. However, I was particular about the spec of 8K, and I was enthusiastic to put it out first, ahead of other companies. We have been making efforts to improve video performance at the same time as still images. Naturally, this new product has significantly improved still image performance, and I am not strongly conscious of giving it a big mission to attract video users

The second part I put in emphasis is the interesting part. Although something might have been lost in machine translation from Japanese, it seems to say “the only reason we put 8K on the EOS R5 was to be ahead of competition“. It really sounds that way.

He also seem to say that the commercial success of the Canon EOS R5 was mainly due to the name and the hype built around the camera.

“First of all, it has high performance and strong product appeal. The timing of the release was also great. The camera market has bottomed out significantly since spring, and we were able to launch new products when it recovered. In some respects, the return of the market was a tailwind.”

Mr. Tsuyoshi Tokura seems quite optimistic about the mirrorless market:

The EOS R5 is a professional product, and the price is quite high. Not only the body but also the (sales of) interchangeable lenses for full-size mirrorless cameras are growing steadily, and I feel that it shows the solidity of the R serie

Guess this interview will stir up new polemics about the Canon EOS R5.

Canon EOS R5 reviews are listed here, for EOS R6 reviews see here. The EOS R5 is highly regarded as a stills camera. In particular, the EOS R5 autofocus system seems to be huge leap forwards. User manual are available for download for the EOS R5 and the EOS R6. 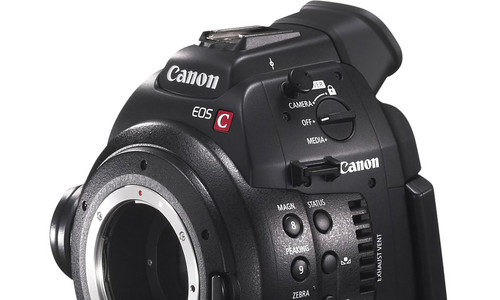 We got an interesting tip (thanks) about a Canon 8K camera with a Super 35mm imaging sensor.

Not sure if the specifications we have been suggested apply to the rumored 8K Cinema cameras, or to another camera, maybe the Canon R300.

A Canon 8K camera with a Super 35mm imaging sensor is “in beta version” (we interpret this as undergoing field testing). These are the specifications:

The source added that the camera has a “crazy image quality, higher IQ than HELIUM 8K S35 and VENICE 4K S35 mode in dark scenes“.

The first of these 8K Cinema cameras will be the next flagship, boosting some pro-oriented features.

The other one will be a modular and more similar to the Cinema EOS C300 Mark III and Cinema EOS C500 Mark II cameras.

No price nor specifications so far. We assume that Canon might announce these cameras around April 2021, i.e. when NAB 2021 is scheduled.

If you follow us, you’ve seen the latest Canon EOS R5 rumors. And if you did, you might be scratching your head because of the rumored 8K @30fps.

Thanks to an attentive user of CW, it turns out Canon anticipated an EOS R model with 8K video already one year ago (sorry, I forgot). In an interview with Imaging Resource, a Canon exec said:

However, the “EOS-R-series roadmap” could easily extend over the next 5 years, and nothing in the interview suggests that the Canon EOS R5 will feature 8K video. But then, it has been said by a Canon executive, so at least you can be sure that it will be featured on some future EOS R camera. Now it’s to see how far in the future this EOS R camera is.

One thing is sure: if the EOS R5 comes with 8K, then Sony might be in serious troubles.