Please note: I’m pretty sure the moniker EOS 77D showed up before somewhere on the web.

I have been told (thanks) that there might not be two new Rebel DSLRs by Canon, but just one Rebel and a new DSLR named EOS 77D. The EOS 77D would be the replacement for the Rebel T6s (and hence we may not see a Rebel T7s). Moreover, my source suggested that the EOS 77D might have Dual Pixel AF on board (which we heard previously).

This makes sense. The Rebel T6s was the less entry-level Rebel DSLR. It has a display on top, a control wheel, mode dial lock, and other features normally not seen on a Rebel class DSLR. I always thought the Rebel T6s was entering the domain of the EOS xxD line-up.

The moniker EOS 77D looks a bit weird to me, not really Canon-like. On the other hand, the 2-digits moniker would in some way suite the feature set of a possibly even further enhanced Rebel replacement. However, this rumor strikes with another rumor we recently got, suggesting the new Rebels will be named EOS 770D and EOS 780D in Europe. No way Canon will name the same camera EOS 780D in one continent and EOS 77D in another.

The announcement of these upcoming Canon DSLRs is expected soon. For the time being, rumors suggest a 28MP sensor.

What do you think? Sound off in the comment section.

I’ve been told that the Canon Rebel T7i and Rebel T7s may feature a 28MP sensor. One of this new Canon Rebels may also feature DPAF.

Just a few days ago we had a leak about some unreleased Canon gear which showed up at a Russian certification authority. I guess the next Canon Rebels are on this list.

While I think it’s fair to assume the next Rebels may have a 28MP sensor, I have some doubts about Dual Pixel AF to be featured on a Canon Rebel. I am not sure if Canon will implement its first tier on-sensor AF on an “entry-level” DSLR. So far, Canon made a clear distinction between camera models with and without DPAF. Since they didn’t give it to the EOS M3 (where it was for sure more needed than on a Rebel), I doubt Canon will feature it on a Rebel. However, as usual anything is possible.

The next Canon Rebels were rumored to be announced before CES 2017 by sources other than mines but we didn’t see no new entry-level DSLR so far, and CES is over. The new candidate announcement date is somewhen in February.  It’s still unclear when Canon will announce them. Also, no specs so far.

If you have suggestions please sound off in the comment section. Stay tuned! 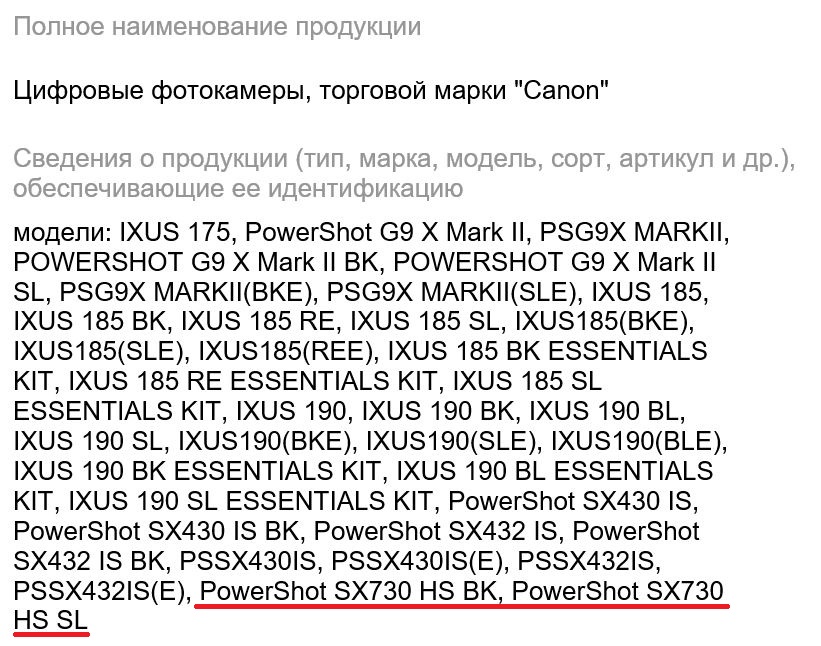 Nokishita Camera posted some information  about unreleased Canon products which were registered at a Russian certification authority.

As you can see, we have the PowerShor SX 730 HS (black and silver color option), a new version of Canon’s electronic viewfinder, the EVF-DC 2, a new remote controller, and two interchangeable lens cameras. The latter, may be the upcoming Rebel T7i and T7s (possibly in various color options) I do not think it has to do with new mirrorless cameras.

This stuff may be announced soon. Stay tuned…!

Thanks. The next iteration of Canon’s popular Rebel series may be named EOS 770D and EOS 780D in Europe.

Besides thinking it makes sense, I have no other hints about the reliability of the rumor. We expect the new Rebels to be announced soon, most likely in the next weeks.

A list of certification information for Canon products leaked at Nokishita Camera. Pretty safe to assume that these are the products Canon is set to announce soon, likely before CP+ in January.

Please note that the DSLRs listed at the top are the replacements for the Rebel T6s and Rebel T6i. The mirrorless camera is likely the one rumored a few days ago. The other items in the list are PowerShot cameras, of which the PowerShot G9 X Mark II was already expected.

Two weeks ago we reported that a bunch of Canon gear was registered at certification authorities around the globe. In this list we find two Canon DSLRs:

These two DSLRs were rumored to be new Rebel T7i and Rebel T7s. This got now suggested once more, with the addition that the “new Rebels will launch in a ‘unique way’”. A plausible announcement date could be CP+ (February 2017).

Apparently there is no Rebel SL2 on the horizon, at least according to rumors, or the lack of. The last time we heard something about was in February 2016.