Dave Etchells of Imaging Resource had the chance to talk to Canon engineers about the brand new Canon EOS R.

[…]what’s being referred to are the number of AF point positions you can choose from, when in single-point mode and using the rear-panel arrow keys. When you press one of the arrow keys, the box showing the single AF “point” moves a small step in the chosen direction. Adding up the number of steps in each direction, you’d likely come up with the claimed 5,655 points.

Since EF-mount lenses used via the adapter are so much further from the sensor surface, it seems likely that they wouldn’t be able to support as large an AF area as native RF-mount ones. I asked, and it turns out this is true. It will vary some based on the specific lens design, but some EF-mount lenses won’t have quite as wide AF coverage as the native ones. Native RF-mount coverage is 100% vertically and 88% horizontally, but some EF-mount lenses will only have 80% horizontal coverage (again, depending on the specific lens design).

How does EOS R autofocus compare to cameras like the 5D Mark IV?

[…]relative AF performance depended on the subject; that the EOS R would win sometimes and the 5D IV or 1D X II other times. They didn’t elaborate on what subjects they thought each would be best at, but I thought it was significant that it wasn’t all one way, and that the EOS R in fact would win some AF matchups, even against some of Canon’s top SLRs.

The entire interview can be read at Imaging Resource.

Pre-orders for the Canon EOS R are live. Shipping is expected to start in October 2018. 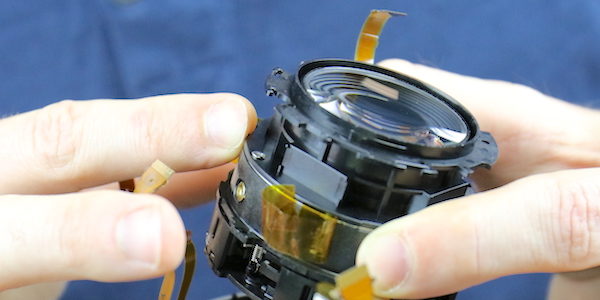 All images © lensrentals.com and used with permission

[…] this is, as we would expect, a very well built lens with robust roller bearings, large brass collars, heavy metal keys, and good weather sealing. [Lens Rentals has] some hints, and a lot of Roger speculation, about how Canon is getting lenses with such low variance. Here’s what we know: Canon has more optical adjustments than most lenses, not less. So while they may have tighter tolerances (I have no clue), the key seems to be more in a careful optical adjustment of compensating elements than anything else.

It is clear that Canon is going with more, and more straightforward, adjustment of optics than the other manufacturers.

Be sure to head over to Lens Rentals to see the many pictures of the teardown, and to get the findings.

Ever wanted to learn what a phase detection autofocus system is?

ZY Productions on YouTube posted a neat 4 minutes video where they explain what phase detection autofocus is and how it works. Enjoy.

So what is Nikon exactly doing? Say’s Etchells:

Companies designing chips of whatever sort generally rely on standard processes established by the “foundry” company that does the actual manufacturing. In these cases, the design process is “just” a matter of defining the layout of the devices on the chip. I say “just” though, because it’s far from a routine process to do this. The size and shape of transistors, photodiodes, resistors and capacitors determines their electrical characteristics, and there are loads of tradeoffs involved in balancing light-gathering efficiency, noise levels, readout speeds, on and on. A big trick is designing the pixels and readout circuitry so there’s as little “dead” (non-light-sensitive) area as possible, while maintaining readout speeds and minimizing power consumption.

Nikon designs its sensors and Sony manufactures them. The surprising thing here is how deep into details Nikon’s sensor design goes, let alone all the simulations and the testing. The reason Nikon is doing this, has to do

with being able to optimize the camera system as a whole, in ways that you can’t if you’re just using off-the shelf parts

In other words: Nikon wants their sensors to be optimised for their lenses and to work at best with Nikon’s also in-house designed EXPEED image processing engine. The sensors featured in the Nikon D850 and Nikon D5 are an example of Nikon’s testing, simulation and overall sensor design.

To learn more about imaging sensors in general and about Nikon’s super-secret sensor design laboratory head over to Imaging Resource.

Well, this is an interesting Canon patent application we spotted (20180164603), and it shows how much care Canon applies to details.

Some background information first. Simplifying it very much, the image stabilisation system of a lens is build on top of a vibration gyroscope sensor. The process of stabilising an image in the lens occurs through a image (shake) correcting unit. The correcting unit uses electromagnetic fields, generated by applying current to a coil.

The generated electromagnetic fields can influence the electronic circuitry and hence may degrade the image quality by generating noise in the image. Turns out that shielding the coil isn’t that easy.

If I got the patent right, it tries to reduce the magnetic field by clever use of non-magnetically conductive materials and shielding. From the patent literature:

This patent application might go into production one day.

Other Canon patent applications we think might get into production in the next few years are these:

Canon posted a technical article about the company’s efforts in researching large size image sensors. The sensor in the article below is 40 times the size of a 35mm CMOS sensor. Nothing you will see on Canon’s next mirrorless camera.

A certain level of light is required when shooting with a digital camera or camcorder, and without it, images cannot be captured due to insufficient sensitivity.

In the pursuit of further improving the sensitivity of imaging elements, Canon has embraced the challenge of achieving higher levels of sensitivity and larger element sizes while maintaining high-speed readout performance, and has succeeded in developing the world’s largest class of CMOS image sensor measuring approximately 20 cm square. At present, the standard diameter of the silicon wafers on which CMOS sensors are fabricated is 12 inches (approx. 30 cm). As such, a 20-cm-square sensor is the largest size that can be manufactured based on these dimensions, and is equivalent to nearly 40 times the size of a 35 mm full-frame CMOS sensor.

Increasing the size of CMOS sensors entails overcoming such problems as distortion and transmission delays for the electrical signals converted from light. To resolve these issues, Canon not only made use of a parallel processing circuit, but also exercised ingenuity with the transfer method itself. As a result, the sensor makes possible the shooting of video at 60 frames per second with only 0.3 lux of illumination (approximately the same level of brightness as that generated by a full moon).

Canon has spent many years working to reduce the pixel size for CMOS image sensors. These efforts have led to astounding results, making possible a pixel size of 2.2 µm for a total of approximately 120 million pixels on a single sensor. The APS-H size (approx. 29 x 20 mm) CMOS sensor boasts approximately 7.5 times the number of pixels and 2.6 times the resolution of sensors of the same size featured in existing products.

This CMOS sensor performs parallel processing to support the high-speed readout of large volumes of pixels, and by modifying the method employed to control the readout circuit timing, Canon successfully achieved the high-speed readout of sensor signals. As a result, the sensor makes possible a maximum output speed of approximately 9.5 frames per second, supporting the continuous shooting of ultrahigh-resolution images.

Images captured with the ultrahigh-resolution CMOS sensor maintain high levels of definition and clarity even when cropped or digitally magnified. Accordingly, this sensor offers potential for a range of industrial applications, including cameras for shooting images for large-format poster prints, cameras for the image inspection of precision parts, aerospace cameras, and omnidirectional vision cameras.

The 120-megapixel ultrahigh-resolution performance of the Canon CMOS sensor may lead to unprecedented industrial applications that could only be imagined in the past.