The image on top shows a slide that was presented during the Canon EOS R announcement/presentation (so we were told).

If real it might give us reason to think Canon is indeed working on a full frame mirrorless camera with IBIS (In Body Image Stabilisation). Canon execs always stated that optical IS (i.e. image stabilisation in the lens) is the better technology. It seems they are about to change their mind, or maybe their just responding to user requests.

The Canon EOS RP, the company’s first entry level full frame mirrorless camera was announced yesterday. And it has a price that we didn’t expect from Canon. In an interview with Imaging Resource, Canon execs stated clearly that the EOS RP has the same internals as the EOS 6D Mark II, something we reported over two years ago.

I wonder when we will see a Canon mirrorless camera with IBIS, in one, two, three years?

Here is a PDF with the complete specification list of the upcoming Canon EOS RP. Announcement in a few hours.

UPDATE: Both pages are no longer live.

The first able to buy the new Canon EOS RP appear to the brits.

The Canon EOS RP and five or six new RF lenses will be announced in a few hours, today at midnight EST. Pricing in the USA is still not e entirely clear but rumor has it that the body only option might start as low as $1,299, which seems to be very not Canon like.

Today we also saw the first price drops of the an EOS R kit and some RF lenses.

Nokishita update the specifications for the upcoming Canon EOS RP, and there are some new images too.

4K on board will not be enough to stop the “same sensor as EOS 6D Mark II” nonsense, actively pushed by some sites. Rest assured, it’s not the same sensor, just the same resolution.

As you can see in the image on top, a battery grip for the EOS RP will also be available. Apparently, the grip will come in three colors.

UPDATE: a new specification lists surfaced, we updated the post. 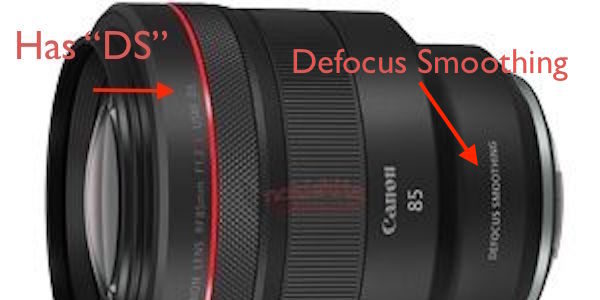 The image leaked today contains a “DS” (Defocus Smoothing) signature after the “USM” (see image above). The picture of the RF 85mm f/1.2L leaked last week does not have the “DS” signature (see image below).

“Defocus Smoothing” has been trademarked by Canon. We think it’s an optical technology to make the lens bokeh, well, smoother.

So there may be six and not five new RF lenses Canon is set to announce on Thursday February 14, 2019, along with the EOS RP.

Nokishita spotted a document filed by Canon at a wireless certification authority.

The Canon PowerShot G7X III should be announced soon.