Canon execs are giving a lot of interviews as for late. Here is one more.

Many of your competitors have introduced in-body image stabilisation (IBIS). Does Canon intend to introduce this technology?

MB: In-camera stabilisation – moving the sensor – is good for wide-angle and standard lenses, but as the focal length increases IBIS becomes less effective. There’s a very sharp drop-off. If you look at our competitors, all those who use IBIS still have an optical stabiliser in their longer lenses.

There is a high demand for IBIS, but we want to make sure we get it right. It’s on our drawing board, but when, or if, we implement it is still to be decided.

Basically, Canon is saying they will feature IBIS when it will be ready and satisfying their quality standard. Which is what we are used to see from Canon.

Fear not, Canon will continue to develop DSLRs.

MB: Yes. Canon still sees demand for all sorts of cameras – including DSLR and mirrorless – so we will continue to produce across multiple product lines. We’ve only just phased out the EOS-1 film camera because there were still people buying it in certain markets, and we will see the same with the DSLR cameras.

There are certain technologies where we don’t think mirrorless is quite ready – the electronic viewfinder for instance – compared to the SLR system where there is zero lag through the viewfinder.

And finally, the question we featured in the title of this article. Apparently an EOS R model with a price below the EOS RP might be in Canon’s agenda.

Do you see a full-frame camera coming in at a price below the RP?

What?? So, did I get this right? Canon will launch a full frame mirrorless camera with a price below the Canon EOS RP ($1,299). They for sure have the technology.

What about the a pro model in the EOS R series?

And a pro version before the 2020 Olympics in Tokyo?

There is a lot to come from Canon, in 2019 and especially in 2020. We expect Canon to announce a high resolution EOS R model before end of 2019. Stay tuned with us.

Once again an interview with Canon execs debunks some hasty rumouring.

Imaging Resource sat down with Canon execs to discuss a lot of photographic topics but mainly the new Canon EOS R system.

[the] takeaway from this discussion was that Canon will continue investing in photographic technology, saying that imaging is fundamental to everything that they do, and that we should therefore expect to see significant developments in the photo arena over the next period of time. I have been concerned — as have others — by what it meant that the EOS-R and EOS-RP were built around the sensor from the EOS 5D Mark IV, a camera that’s now nore than two-and-a-half years old. Without giving specifics, they did note that they had a lot in the pipeline for 2019, so it sounds like we can expect to see a lot more from Canon before the end of the year. Hopefully that will include a new-generation full-frame sensor, possibly even the full-professional mirrorless body they’ve promised will be coming at some point, although of course, they didn’t hint directly at that this time around.[Imaging Resource] discussed lens strategy, and […] was pleased to hear that they’ll be developing a traditional set of f/2.8 zooms (presumably covering ranges lke 14-24, 24-70 and 70-200mm). While the 28-70mm f/2 covers part of that focal length range, it’s a bulky and heavy special-purpose lens and lacks IS, so there’s still a need for a conventional 24-70mm f/2.8. Also coming soon will be a 24-240mm “vacation zoom”, aimed at and priced for consumers. This should make a good companion to the EOS RP for many entry-level users, and we’ll look forward to testing that one for you once available. Read the interview…

We were pretty sure that Canon would release a high resolution EOS R model before this interview and we are more confident now after this interview. The interview was about the new Canon EOS RP, the six RF lenses Canon is set to announce soon, and in general what’s going to happen with the EOS R system.

Excerpts from the interview:

How do you prioritize which [RF mount] lenses to develop?

So the idea for the initial four lenses was we wanted to deliver the surprise factor, so we decided to deliver the 28-70mm, as well as the 50mm F1.2, with stunning resolution. That was the concept behind these two lenses.

With 24-105mm we thought it would be the best match as a standard zoom lens to the EOS R camera, and the 35mm F1.8 was supposed to be an affordable and compact travel companion. Those were the concepts behind the four initial lenses.

With the six additional lenses that we introduced as development announcements this time, we believe we will be able to deliver more surprise factors, for some models compactness. These two concepts with the addition of these models.

About the Defocus Smoothing technology.

Can you give any insight into the DS technology?

With lens such as the 85mm F1.2 bokeh is a really important factor, because it’s a portrait lens. We really wanted to deliver something that was not possible with the conventional lenses, so we decided to develop this technology of defocus smoothing.

The fact with our DS technology is that it’s a coating technology, so it’s relatively easy to apply this technology to a range of different lenses. This is all we can say at this moment.

Read the interview at DPReview.

In an interview with DPReview, Nikon execs share their thoughts about the company’s Z 6 and Z 7 cameras and about the state of the mirrorless nation.

As far as I know Nikon is the first company clearly and directly addressing the fact that EVFs (Electronic View Finder) still suck compared to an optical viewfinder.

From the interview (emphasis mine):

Question: How do you think the market for full frame mirrorless will evolve?

Answer: In terms of hardware, it is likely that mirrorless will catch up with DSLR. But one thing that is a challenge is the time lag of electronic viewfinders. Even though we have a great mirrorless [solution], we cannot beat the optical viewfinder.

For really high-level professional photographers at sports events and so on, I believe that the DSLR will survive. I think there will be a synergy between DSLR and mirrorless, so we can expand the market moving forward.

[…] we’re really trying to be the best and provide the ultimate performance of the viewfinder. The view through the viewfinder should be as natural as possible. To achieve that goal we did two things – we focused on the optics, and also on image processing.Read the interview at DPReview… 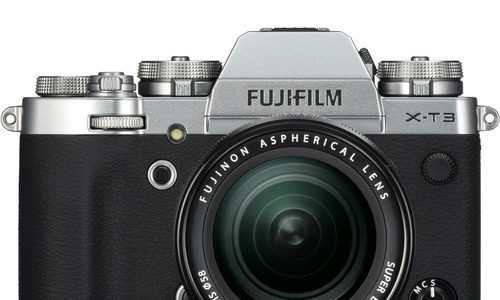 During CP+ 2019, Imaging Resource sat down with two top Fujifilm execs (Toshihisa Iida and Makoto Oishi) to talk about the photo industry.

In another interview, Canon stated that the camera market is doomed to shrink by 50% in the next years. A prediction Fujifilm execs seem not to agree with.

DE: [Canon exec] says that the interchangeable-lens business is going to contract by half, over the next two years. Do you agree with that assessment? What are your own projections?

TI: We really just cannot believe that projection of Canon’s.

DE: Yeah. What are your projections, what do you think the market will do overall?

TI: I think it all depends on what innovation and what influence comes from the manufacturers. It’s our mission to make the market viable. So I think our projection is there’s a lot of room even to grow further in the camera market.

TI: Yeah, yeah, yeah. If we look at the Asian market, there’s a huge population over there. Some countries may decline, but some countries soon will change to growth. I think overall, the global camera market, you know…

For a complete analysis of the interview head over to Fuji Rumors.F

Amateur Photographer sat down with Canon execs at CP+ 2019, and the talk was about Canon’s mirrorless full frame EOS R system.

The short interview gives some interesting insights in Canon’s agenda. The EOS M is the mirrorless system with APS-C sensor, Canon confirms. However, when asked if they will make an EOS R with APS-C sensor, the answer is somewhat ambiguous while still confirming that the EF-M mount is the APS-C mirrorless mount. Judge by yourself:

YM: That’s a product development for the future so I can’t go into detail, and the market will dictate what sort of direction we should take. If the customers do want a small size, lightweight mount I believe there is room for that, so as we said […] we will continue to work with the M mount.

When asked about IBIS the answer is more straightforward.

AP: There have been quite a lot of requests from customers and reviewers alike for IBIS on the EOS R, not to mention dual card slots. How do you respond to this?

YM: Yes, we are aware of these voices… We are thinking how we can develop the line-up. With the R and RP we look at the entirety of the package, as mentioned. In terms of IBIS, we are looking into it for the future. We believe IBIS will work together hand in hand with optical IS lenses, such as the ones you see in front of you, to offer better features.

There is more to grasp in the interview at Amateur Photographer.