Canon patent application 2019-0191089 discusses an IBIS unit which could well find its way into a future Canon EOS R model.

We already know that most likely Canon will feature IBIS (In Body Image Stabilisation) on future Canon mirrorless cameras (and maybe on DSLRs too). Canon execs confirmed it.

Another Canon patent application discusses how to make IBIS and lens IS work together smoothly.

This is not the first IBIS-related patent filed by Canon. It’s now safe to assume that Canon will indeed implement IBIS in a future mirrorless camera (both EOS M and EOS R?).

Given the quantity of Canon lenses with IS it was to expect that Canon is interested to make IBIS wok with image-stabilised lenses.

Answering the most common critics (all excerpts are machine translated):

People who criticize Canon are divided into two types. The first does not like the skinton, form factor or some particular points. The second – do not digest the marketing policy of the company. Why, for example, in one of the new Canon cameras – neither in the flagship, nor the middle or entry level, is it not possible to record 4K video without a crop? The company is technologically unable to carry out this task?

– We did not set such a function intentionally. We have a series of Cinema EOS – movie cameras. Canon separates EOS R and Cinema EOS from each other. This series is aimed at shooting professional video. Camera Canon C700 – there certainly is 4K from the whole frame.

Might there be some truth in the fact that Canon doesn’t “want to cannibalize” their video segment?

Is there a new Canon camera in the pipeline?

Could it be that the company is already testing a new camera, which will later be announced, for example, before the Olympiad?

“I’m sure Canon is already developing next-generation cameras, because testing usually starts at least a year before the camera enters the market.”

And when does testing end?

– A few months before the camera announcement. We have a very serious program of ambassadors, a very tough selection. Canon has the whole EMEA region – the whole of Europe, the whole of Africa, the Middle East and Russia – only 40 people. These are people with publications, participants of professional exhibitions of various genres, people who have really proved their professionalism, and we are working with them on testing .

What about IBIS (In Body Image Stabilisation)?

– We already have three patents on IBIS – on a mobile matrix and stabilisation, but we continue to work on them.Canon never uses technology that has not yet been tested.It took us so much time, because the technology itself requires a very detailed study, because the moving matrix is ​​good, on the one hand.On the other hand, go to any service and ask how many cameras they have there with broken moving dies. The stabilization system is a very fragile thing.

So, let’s hope IBIS will soon come to Canon DSLRs and MILCs, and let’s hope future Canon optics will be less expensive. 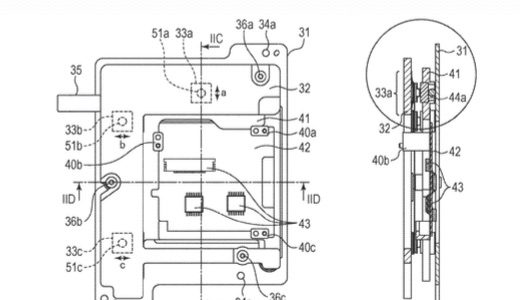 Not the first Canon patent application about IBIS (In Body Image Stabilisation).

Patent application US20190094566 describes the technology for a sensor based image stabilisation system.

Amateur Photographer sat down with Canon execs at CP+ 2019, and the talk was about Canon’s mirrorless full frame EOS R system.

The short interview gives some interesting insights in Canon’s agenda. The EOS M is the mirrorless system with APS-C sensor, Canon confirms. However, when asked if they will make an EOS R with APS-C sensor, the answer is somewhat ambiguous while still confirming that the EF-M mount is the APS-C mirrorless mount. Judge by yourself:

YM: That’s a product development for the future so I can’t go into detail, and the market will dictate what sort of direction we should take. If the customers do want a small size, lightweight mount I believe there is room for that, so as we said […] we will continue to work with the M mount.

When asked about IBIS the answer is more straightforward.

AP: There have been quite a lot of requests from customers and reviewers alike for IBIS on the EOS R, not to mention dual card slots. How do you respond to this?

YM: Yes, we are aware of these voices… We are thinking how we can develop the line-up. With the R and RP we look at the entirety of the package, as mentioned. In terms of IBIS, we are looking into it for the future. We believe IBIS will work together hand in hand with optical IS lenses, such as the ones you see in front of you, to offer better features.

There is more to grasp in the interview at Amateur Photographer.