Here is a very interesting Canon patent application, once more for an RF mount lens. An RF 28-70mm f/2.8L with inner focusing and that does not extend might be in the works.

The Canon patent application spotted by asobinet.com (they did not disclose the patent number), discusses optical formulas for a RF 28-70mm f/2.8L lens. The interesting part, if I got it right from the machine translated Japanese text, is that the lens not only does all the focusing but also employs a design that is usually found on wide-angle lenses.

It sounds like a patent for a small and lightweight standard zoom. The characteristic of this optical system is that the total length is the longest at the wide-angle end and the total length becomes shorter toward the telephoto end. This is a common optical system for wide-angle lenses, but I don’t see this type of lens with standard zoom lenses, especially with large-aperture zoom lenses. If it is really put into practical use, it will be a very portable lens.

Did I get it right? The lens is indeed described to be shorter at the telephoto end (emphasis mine) in both embodiment:

Moreover, the lens uses a floating focus structure to achieve autofocus. That means it might have very fast and and highly responsive AF. The patent literature is very clear in what should be achieved:

PROBLEM TO BE SOLVED: To provide a zoom lens having a short overall lens length, being compact and lightweight, and having high optical performance.

Various Canon patent applications that deal with VR applications have been spotted by asobinet.com. Likely they are related to the RF 5.2mm f/2.8L lens.

PROBLEM TO BE SOLVED: To provide an electronic device capable of more preferably displaying a VR image captured by using a plurality of optical systems.

[…] to obtain a wide-angle image with parallax using two optical systems, known technique for displaying a VR (Virtual Reality) image having a stereoscopic effect by displaying maps on the virtual sphere. A twin-lens VR camera for capturing an image with parallax has two optical systems oriented in the same direction, and captures two images with parallax by one imaging operation. As a twin-lens VR camera, a camera that captures a wide range of 180 degrees (hemisphere, 90 degrees in all directions from the center of an image) or more in each optical system is known. In addition, as a VR display method, “single-lens VR display” that displays one image by transforming the VR image into a virtual sphere, and VR images for the left eye and the right eye are displayed side by side in the left and right areas. “Binocular VR display” is known.

PROBLEM TO BE SOLVED: To appropriately dimm an external light entering between a head-mounted display (HMD) and a face.

PROBLEM TO BE SOLVED: To improve the compression rate of a moving image composed of a frame image having distortion of a lens and to suppress the processing amount.

Conventionally, a lens for stereoscopic photography has been used as an interchangeable lens system. By using a stereoscopic lens, a pair of left and right parallax images can be captured. When playing back a captured still image or moving image, the image for the right eye is displayed on the user’s right eye, and the image for the left eye is displayed on the left eye. As a result, an image having a parallax is projected on the right eye and the left eye, so that the user can visually recognize the image having a stereoscopic effect. As a related technique, a stereo adapter of Patent Document 1 has been proposed. The stereo adapter of Patent Document 1 has a left opening for capturing a left image and a right opening for capturing a right image, and is left in each region horizontally divided into two in the image pickup unit of the camera. The image and the right image are imaged at the same time.

And here is a new Canon patent application and as most of them are, this one too is for RF-mount lenses.

PROBLEM TO BE SOLVED: To provide an optical system which is suitable for a macro lens and can suppress aberration fluctuation.

Here is another Canon patent application for an RF-mount lens, as usual spotted by asobinet.com.

Canon patent application 2021-148949 (Japan) discusses optical formulas for what seems to be a RF 16-30mm f/4-5.6 lens for the EOS R full frame mirrorless system. From the patent literature:

If it hits the market, this is going to be an affordable lens for the EOS R system, like the recently released RF 16mm f/2.8 STM pancake lens. 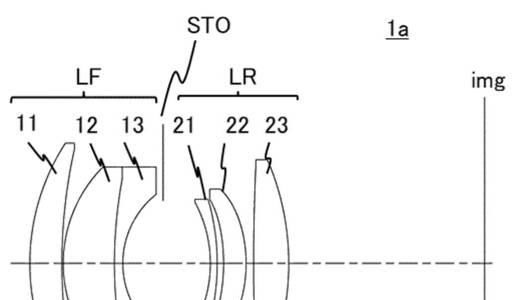 A new Thursday, a new Canon patent. Not surprising yet another one for the RF mount. The whole thing was spotted by asobinet.com.

PROBLEM TO BE SOLVED

To provide a compact, lightweight and large-diameter optical system.

However, the double-Gauss type optical system as disclosed in Patent Document 1 satisfactorily corrects various aberrations such as spherical aberration and curvature of field when the symmetry is broken due to miniaturization. Becomes difficult. In particular, when the optical system has a large aperture ratio, it becomes difficult to suppress sagittal flare and coma flare at an intermediate angle of view.

Therefore, an object of the present invention is to provide an optical system and an image pickup apparatus having high optical performance while being compact and having a large aperture ratio.

According to asobinet, the lens discussed in the patent literature has an optical design similar to the RF 50mm F1.8 STM. Maybe it is another excellent performer at an affordable price.

Interesting Canon patent application spotted by asobinet.com. The sensitivity of the touchpad used for autofocus tracking is automatically adjusted with regard to shutter speed and the subject.

Canon patent application 2021-128242 discusses technology and methods to automatically set the touchpad sensitivity when tracking a subject with autofocus.

Problem: To improve the operability of an AF frame.

[…] In the method [described in the patent, editor’s note] when the user is chasing a fast-moving subject, if the AF frame is set small, the touch move must be performed many times in order to move the AF frame [and hence the subject tracking might fail, editor’s note] Therefore, the AF frame cannot be moved according to the speed of movement of the user, which may reduce the operability of the user.

Do you think I got the patent right? Feel free to speak out in the comments section.